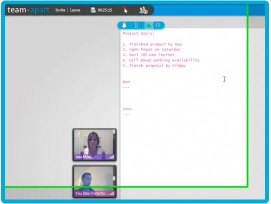 [Update: The first 100 VentureBeat readers to click this promo link will be admitted to Team Apart’s beta automatically.]

Online collaboration spaces, in the past year, have gone from high-concept, low-execution beta sites to a regular workplace tool. Google Docs, Adobe Connect, WebEx and Microsoft Office Live Workspace are the high-profile, high-volume tools. Startups Scribblar and DimDim hope to disrupt the playing field. Team Apart, which unwrapped its own online collaboration site for a public beta test period on Thursday morning, proves that despite the existing players, there’s still room for more.

The company, funded by Y Combinator last August, is essentially three people based in Seattle and in Santa Cruz, California. Rather than trying to replace Microsoft Office, as Google obviously hopes to do, they’ve picked a niche on which to focus: Team meetings for workgroups much like the Team Apart team, separated by geographical distance but connected by broadband. A Team Apart meeting room can be filled with notepads, whiteboards for freehand drawing, images, web pages, and live video chat windows for participants. The meeting rooms, reachable at teamapart.com but stored in the cloud somewhere, preserve the materials from their last meeting. 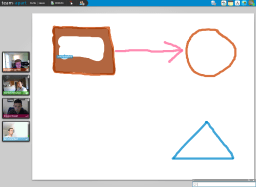 Without thinking, I instantly liked holding meetings at Team Apart. The lightly-colored default design is simply appealing — it’s got Web 2.0 style without being overbearingly so. The rooms aren’t overbuilt, so they’re easy to operate via the few buttons at the top. My meetings never go beyond four people, so the four-person restriction in the current free version isn’t a problem. And I have the option to use a still photo instead of a video feed as my avatar, for those times I don’t feel like being watched while I eat during a meeting.

Team Apart’s winning strategy, though, is to make the base level of its product free, and charge for a Pro version that’s still being finalized. (It will allow more than four participants, that’s for sure.) That made it painless for me to give it a shot. Adobe Connect Pro has a free trial, but Adobe wants at least $375 from those who adopt its more enterprise-grade package. Adobe, with its reputation and clout as a toolmaker for large corporations, can get that kind of money. Startups like Team Apart, DimDim and Scribblar can’t. Their business models still have a large we’ll-figure-it-out factor. For now, giving away a functional product is their only hope to crack the market.

Here’s the quickie review of Team Apart: Its cuteness and simplicity make it easy to start. Its persistent, permanent meeting rooms and $0.00 price make it hard to leave. Unlike Google Docs, WebEx, DimDim or Adobe Connect, the rooms feel clearly designed for recurring meetings of small teams, rather than focusing on presentations to outsiders. It includes video chat windows, which Scribblar doesn’t yet have. It’s not flawless. My live video sessions sometimes sputter. Standard Internet routing delays mean it can take up to five seconds between the time an attendee says something and the time everyone else hears it.

Team Apart doesn’t feel like the one best tool for everyone. But for me, a founder and a publicist on a conference call, it’s easy to grab in seconds. There’s no software installation or complex signup process beyond creating a username and password. And in hindsight, I realize it didn’t crash during my long meeting with senior engineer Ben Porterfield yesterday. Pretty solid for a beta, Ben. Continue to keep the Fail Whale away and you may have a winner.