I watched the final matches, including the semifinal round where Europe’s Splyce eliminated the reigning American champions, Optic Gaming, which had to settle for third place. The final duel between Team Kaliber and Splyce was as exciting as esports matches get. 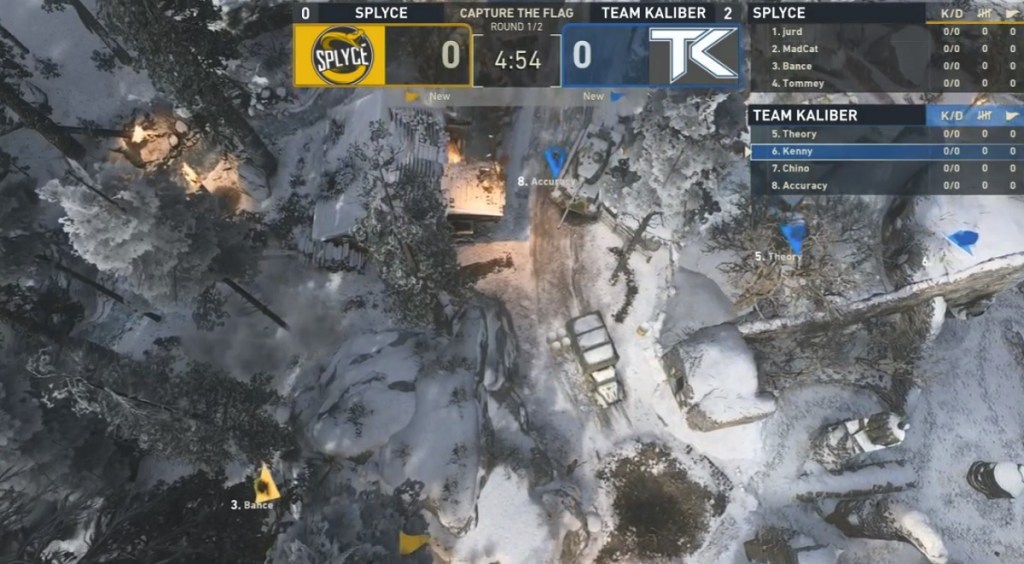 Above: CWL final map in Dallas. This overhead view of Ardennes is new for Call of Duty esports.

The grand final match was a best-of-five competition, and Team Kaliber won the first two in a row in Hardpoint and Search and Destroy matches. Splyce won the third round as it exploited a mistake in a Capture the Flag battle on the Ardennes map. Then, Splyce made a big comeback in a Hardpoint battle in round four on the Ardennes map. Team Kaliber barely beat Splyce in the final Search and Destroy battle on the Sainte Marie du Mont map. The final tally was three wins for Team Kaliber and two for Splyce in the best-of-five final.

One of the star players was Team Kaliber’s Kenny “Kenny” Kuavo, who survived a round while outnumbered and came back to win a clutch round during the second battle. On Splyce, Thomas “Tommey” Trewren put up a good fight, helping his team come up from the loser’s bracket, but he couldn’t turn the tide. Lamar “Accuracy” Abedi was named MVP for his clutch shots in the final rounds.

Above: The final Search and Destroy battle on the Sainte Marie du Mont map at the CWL finals in Dallas.

The season kicked off on November 3 with teams competing online in official matches. The teams participated in regional events, and the squads earning the most CWL Pro Points moved up the ladder.

Last season, Optic Gaming took the top prize in the CWL World Championship, capturing $1.5 million of a $4 million prize pool in a competition centered on last year’s title, Call of Duty: Infinite Warfare. The total prize up for grabs this season is $4.2 million, the highest to date.

This weekend’s Dallas competition was something to see, especially with the sky camera that gave an overhead view of the action. I’ve been playing these maps in WWII multiplayer, and the esports stars are amazing to watch. They’re fast and accurate. As spectators, the audience can see the outlines of all of the players on the map with a kind of X-ray vision while the players can only see what is visible in front of them. But sometimes, it seems like the players have the X-ray vision.