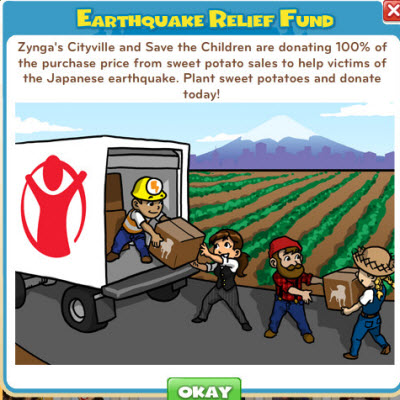 Technology is making it easier to marshal a response to natural disasters, as we’re seeing unfold today with relief efforts and charitable donations for Japan.

While the quake and tsunami in Japan were devastating, it’s heartening to see companies move fast to publicize ways to help. It certainly seems like the response is coming in faster than it the past.

The Red Cross has made it dead simple to make donations on its web site or by texting REDCROSS to 90999 to make an instant $10 donation. The Mobile Giving Foundation also lets you donate $10 simply by texting Japan, Tsunami or other words to different numbers. You can make the donation on behalf of three different charities in the U.S. and another three in Canada.

Zynga also moved fast to partner with Save the Children’s Japan Earthquake Tsunami Emergency Fund and it also set up donations through its social games on Facebook. With CityVille, citizens can plant a limited edition sweet potato crop to feed their population and stock their restaurants. Zynga is donating 100 percent of the proceeds to the fund. It has also set up similar donations with Cafe World, FrontierVille, Words With Friends, Zynga Poker and zBar (which sits atop a Facebook game).

Vonage, a provider of voice-over-internet-protocol communications, also said it will waive per-minute calling charges from 830 pm March 11 until 830 pm (EST) March 18 for customers call from their Vonage home phones to Japan. Microsoft also said it has begun providing free temporary software licenses to all impacted customers, partners, non-profits, governments and institutions involved in disaster relief efforts. It is making Exchange Online available for no cost for 90 days to business customers in Japan. It has also listed ways to help on its disaster response site and it is creating imagery of the areas affected with Bing Maps.

Meanwhile, Carnegie Mellon Silicon Valley Disaster Management Initiative has collected a consoritum of techies to work together on disaster management and humanitarian assistance. CrisisCommons has put together a Wiki page to coordinate volunteers to support crisis-response agencies helping out quake victims.

Apple has also made it possible to make donations for quake relief via iTunes.

We’ll keep adding to this document as more ways to donate come through.