For all the talk and disclosures regarding inclusion and diversity, a new report shows that tech companies are making little headway in building racially balanced workforces.

Open MIC, a nonprofit that focuses on issues of diversity, released a study this month that shows African-Americans, Latinos, and Native Americans remain dramatically underrepresented in the tech economy compared to their overall presence in the U.S. workforce. The organization is hoping to get investors to pressure tech companies to be more aggressive with their diversity efforts by making the case that this is a big loss in terms of productivity and profitability, both for the companies and the broader economy.

“In a country with a population growing more diverse each day, the U.S. tech community remains a bastion of white, male privilege that has largely excluded people of color,” said Michael Connor, executive director of Open MIC, in a statement. “Given the growing social, political and economic influence of tech companies, the lack of diversity in the sector has implications that extend far beyond the industry itself.”

According to the report — called “Breaking the Mold: Investing in Racial Diversity in Tech” — African-Americans and Latinos each represent about 5.3 percent of the tech workforce, at least 16 percentage points below their overall numbers in the general workforce.

Making this challenge even steeper: People of color working in tech report feeling isolated and discriminated against, which results in their leaving the tech workforce at a rate 3.5 times greater than that of white men.

The paper cites another study by Intel that found over the past five years, various tech companies and organizations have pledged to spend $1.2 billion on diversity programs.

Despite that spending, the Open MIC report found that over the past 15 years, racial and ethnic minorities have only seen their numbers increase by less than 2 percent in the tech sector. And in the upper ranks, the study found that only 2 percent of executives are African-American and 3 percent are Latino.

“There is substantial evidence that diversity leads to stronger economic gains for companies, no matter the industry,” the report says. “Given the digital world’s burgeoning social and economic influence, the current lack of racial diversity in the tech industry poses serious risks for investors, the tech sector and society at large.”

Finally, the report included a table of workforce diversity numbers and top tech companies, based on their own public disclosures and data from the U.S. Equal Employment Opportunity Commission: 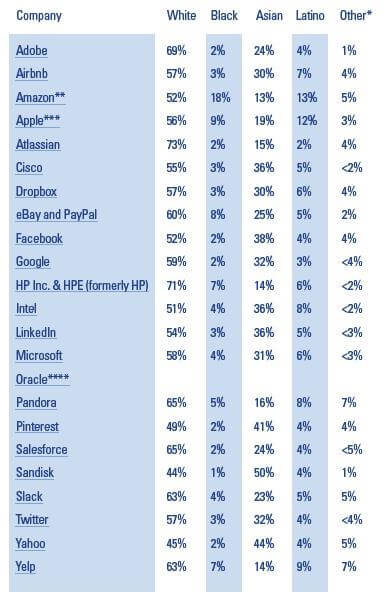