Detroit filed the largest city bankruptcy in the history of the United States on Thursday. And that’s a great thing, according to the growing and vital cadre of startups that are helping to repopulate the city’s downtown core.

“It’s time to stop tinkering and rip the Band-Aid off to help us start fresh,” Bob Marsh, the CEO of job gamification startup Level Eleven, told me via email. “I see great potential for Detroit, and that’s why I started our company in the city nine months ago. The bankruptcy announcement is just one more step in the right direction.”

I spent a week in Detroit last year, talked to dozens of local startups, interviewed billionaire businessman and sportsman Dan Gilbert, and was surprised and gratified to see energetic, passionate entrepreneurship and a growing ecosystem of talent, money, and tools right in the heart of Detroit’s supposedly devastated downtown. 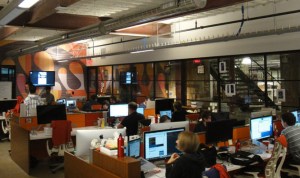 It’s one reason why last year Detroit was rated one of the best U.S. cities to get a job in technology.

After hearing Thursday’s news about the city’s $18 billion bankruptcy, I contacted some of those same people to find out what they thought of the news, which is yet one more black eye on Detroit’s already bruised and bloody public face. They’re not backing down one step, and they’re adamant that tech — and startups — have a role to play in reinventing the Motor City.

“The tech community is a key part of a virtuous cycle that’s quickly improving Detroit,” Nathan Labenz of Stik, which helps local businesses currate reviews, told me. “There’s a ton of activity and excitement centered around the incubator/coworking space at the Madison building, and we’re now starting to see young companies grow and move out of the Madison building into other spaces nearby.”

Greg Schwartz of UpTo, which creates a social calendar for iPhone and Android that recently landed a $2 million Series A investment round and has been featured by Apple, agrees. 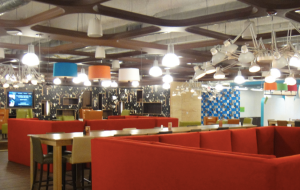 “I don’t want to underestimate the pain that this causes, but we have already begun a cool turnaround,” Schwartz said via phone. “We’re hopeful and more committed than ever to Detroit, have been hiring people in Detroit, and just added a couple more people, including one from San Francisco.”

San Francisco is a recurring theme for many cities that want to emulate the the Golden Gate city’s tech success, but one company moved away from S.F. and toward Detroit recently. Stik is an example of one company that reverse migrated, swapping SoMa for Detroit.

Labenz had good reasons, he says, for the move.

“We believed, and it has proven true, that it would be easier to build a great team in Detroit,” he told me. “We’ve been able to attract some absolutely top-notch developers with a fraction of the time, effort, and expense that would have been required in San Francisco. Don’t get me wrong: We loved San Francisco. But as any startup founder will tell you, recruiting there is a full-time job.”

Dan Gilbert, the Quicken Loans founder who has invested in numerous local startups, has taken advantage of what he called a “sale on skyscrapers” to rebuild and revitalized the downtown business community, and he walked the walk by moving thousands of his Quicken Loans employees downtown. He said the pain of the bankruptcy is temporary and should be ignored. 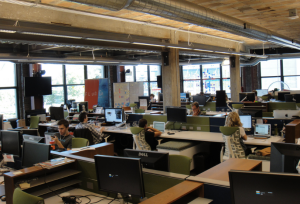 Above: Startup space at Detroit Venture Partners in Detroit.

“Many forecasted the end for GM and Chrysler when they declared bankruptcy just a short few years ago. Today, GM and Chrysler are thriving,” he said in a statement. “Detroit’s best days are ahead.”

While in Detroit, I spent a large portion of my time in the downtown startup hub M@adison, which houses Detroit Venture Partners, Ludlow Ventures, angel investors, a small Twitter office, a coworking space, and Bizdom, an accelerator. The buzz and the energy was the same as the energy I’ve felt in startup hubs around the world, including in California, in Canada, and in Asia.

“Technology is the cornerstone of Detroit’s revival. Many people fail to realize that Detroit was built on creativity and innovation — from Henry Ford’s assembly line to Thomas Edison and the light bulb. It’s today’s generation of innovators who are the ones helping to rebuild this great city and its technology that will allow Detroit to flourish once again.”

I’ll give the last word to Detroit Venture Partners chief Josh Linkner, who has funded many startups in the past several years.

“I’m proud to say Detroit is my hometown,” Linkner said. “It will still be my town tomorrow, the day after, and in the years to come.”