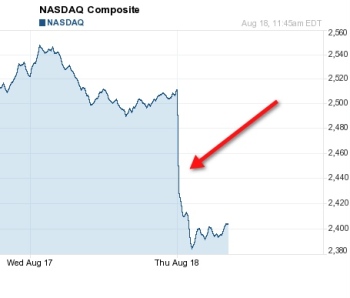 Technology stocks on Thursday fell sharply and have remained down in mid-day trading as the entire market shuddered on poor economic news.

But HP, the world’s large computer maker, saw a jump in its share price after an unconfirmed report from Bloomberg that it will spin off its PC business and could announce the move as early as today.

At midday Thursday, the Nasdaq exchange was down 4.3 percent while the S&P 500 was off 4 percent. Big technology stock falloffs included NetApp, which was trading down more than 18 percent after a surprisingly weak quarterly earnings report. The company’s outgoing chief financial officer cited a “dramatic slowdown” in July sales. The news hit other data storage companies, including NetApp’s biggest rival, EMC Corp, which was down more than 9 percent. Dell was off 5 percent.

HP, which is set to report earnings later this afternoon, was down for most of early trading but then shot up after a Bloomberg report said the company might spin off its PC business and might acquire UK business software and search company Autonomy for $10 billion, citing unnamed sources. (By the way, Autonomy first launched at DEMO, the conference VentureBeat coproduces, in 1996.) HP then gave up some of its gains and is trading slightly higher than opening — but fluctuating.

The biggest tech companies were taking the hits better than the overall market. At mid-day, Apple was only down 2.9 percent, Google was down 3.7 percent, and Microsoft was down only 0.8 percent.

Overall, the market is reacting to a number of a negative economic reports, likely reinforcing concerns about consumer and business spending on technology. The news included rising Americans jobless benefit claims, rising consumer prices (0.5% in July), and a slow down in home sales — as well as debt and other economic concerns internationally.

Are you concerned about tech stocks? Which companies do you see as the best bets to survive the turmoil?