The idea that you’ll be better off financially if you leave the expensive Bay Area is one of the big selling points for Heartland cities. However, a new report from job site Indeed finds that most software engineers and developers would be wise to go where the paycheck itself is highest.

Indeed calculated the average salary for various tech jobs, using annual salary information posted on its site between August 2016 and July 2017 in 25 metro areas. It then adjusted for each metro’s cost of living, using data from the U.S. Bureau of Economic Analysis. The top two spots belong to Charlotte and Atlanta, where the average annual salary for a tech worker, adjusted for cost of living, is $108,178 and $104,454, respectively.

However, prominent tech hubs like Austin, San Francisco, Seattle, and San Jose don’t far fall behind. The average salary for a tech worker in San Jose is $126,937 — which drops to $102,286 when adjusted for cost of living. This means tech workers who are already making six figures would likely only take home $6,000 more each year by taking a tech job in Charlotte instead.

“For the most part, you don’t need to make a trade-off between where you will find more options for tech jobs and where adjusted salaries are highest,” Jed Kolko, Indeed’s chief economist, told VentureBeat.

Two places where this isn’t the case: New York and Washington, D.C., both large metro areas, albeit ones where tech doesn’t make up as large a portion of the local economy. The average salary for a tech worker in New York and D.C. is  $112,101, and $111,980, respectively. But when adjusted for cost of living, that number drops to $91,961 and $94,022. That adjusted salary is a few thousand dollars below the adjusted salary tech workers receive in places like Minneapolis and Denver.

Indeed also calculated the metro areas where salaries for 17 different occupations go the furthest. For the majority of the occupations reviewed, the highest adjusted salary is likely on the West Coast. One of the most surprising additions to the list is Huntsville, Alabama, the metro area where a software engineer will have the highest adjusted salary, according to Indeed data.

Though the metro area only has a population of about 440,000, it’s home to a large army base, NASA’s Marshall Space Flight Center, and a large aerospace manufacturing center from Boeing. Kolko did caution that there wasn’t much separation between the first and second place metro for each job occupation, and Seattle, San Francisco, San Jose, and Austin are still likely the places where workers in the occupations listed below will take home the most cash. 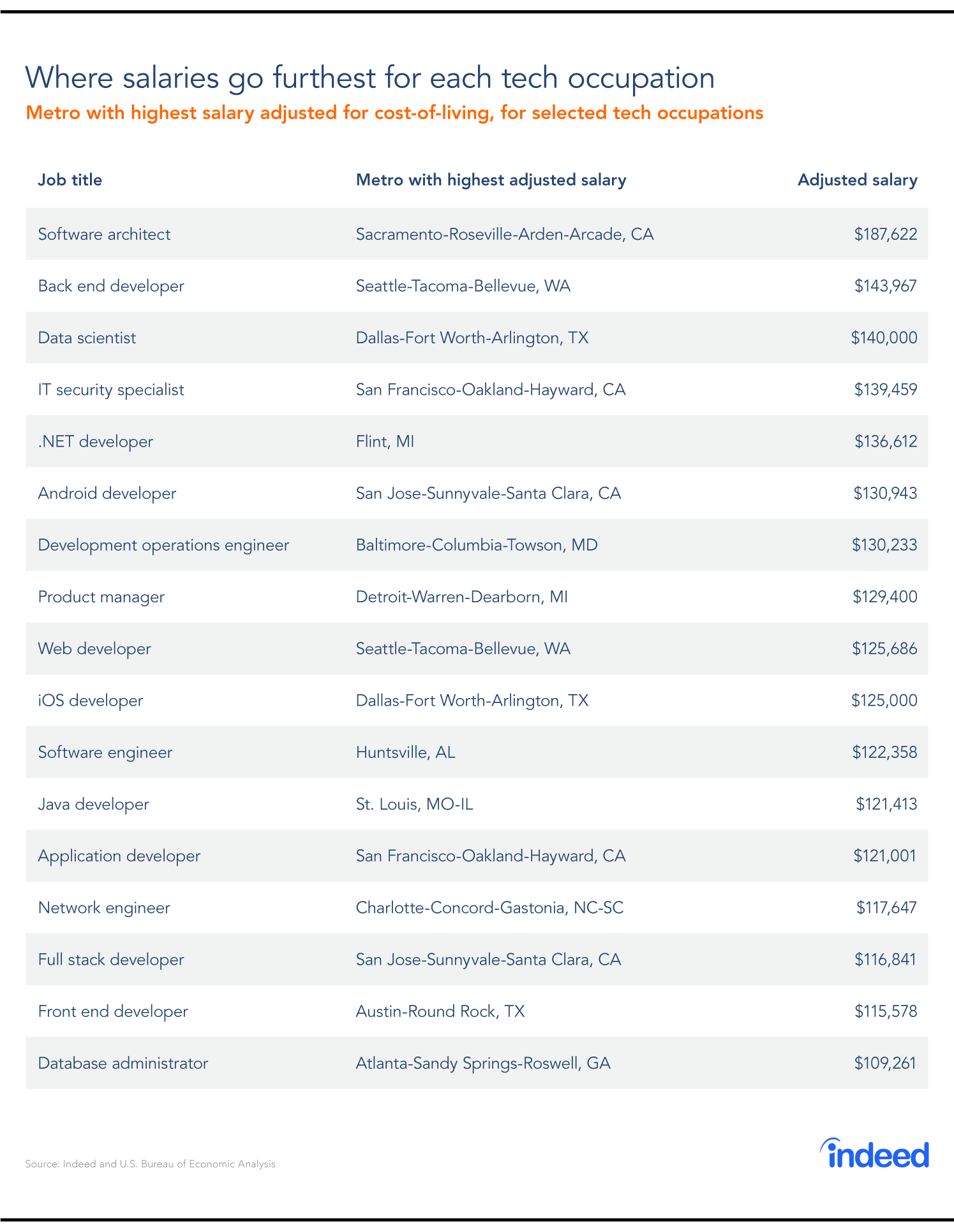