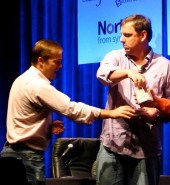 The popular TechCrunch50 conference has gone from off to back on again for next year.

On Tuesday night, high-rolling Mahalo CEO Jason Calacanis told several attendees, plus a reporter on Twitter, plus a video-blogging puppet, that this year’s third annual TechCrunch50 conference, at which several dozen tech startup companies debuted their products onstage Monday and Tuesday, would be the last.

Calacanis and TechCrunch founder Mike Arrington had clearly lost their tempers with each other on Thursday, according to VentureBeat’s on-site reporters and others in attendance. At one point, Arrington marched off the stage.

Because Calacanis and Arrington are celebrities among tech startup entrepreneurs, and because TechCrunch50 is seen as Web 2.0’s middle finger to more traditional, more expensive events, the possibility of no more TechCrunch50 events was a gut punch to many fans who don’t go to the show, but follow it online.

Now, Calacanis has changed his story and says TechCrunch50 is on for 2010. Not surprising, I know, but newsworthy nonetheless.

Jason says he was joking about ending the conference, but if you watch the puppet video and read his Tweets, there’s no nudge-nudge-wink-wink factor to his statements at all. Skip the apologists who’ll say he was punking the media, or whatever they call it now when you lie to a reporter. That’s not ex-journalist Calacanis’ style. “I’ll buy you a steak” is his style.

What did Arrington and Calacanis fight about? Arrington won’t talk, except for what he told VentureBeat’s Matt Marshall a couple of days ago, when he said he had no idea what Calacanis was up to. We interviewed Calacanis on IM to ask if beyond the expected stress of running a two-day conference with 50 presenters, there was more personal resentment between them. Arrington is a successful power broker and widely read (for the tech industry) journalist, yet he hasn’t been able to get rich off it yet. Calacanis is a self-made multi-millionaire who drives a $100,000 Tesla sports car, but he isn’t lionized the way Arrington is by aspiring CEOs. These two must get sick of each other, right?

[Disclosure: VentureBeat co-produces DEMO, a conference partly sponsored by IDG that is competitive to TechCrunch50. This explains Jason’s punch line at the end.]