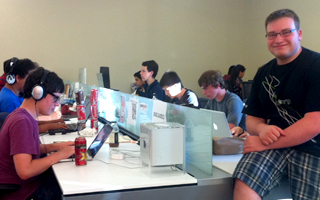 Teenage entrepreneurship gets a lot of press these days, and looking over the teams from the Teens In Tech incubator, it’s easy to see why.

These kids — nine out of thirteen founding team members are still in high school — are in many ways the opposite of their jaded, hoodie-clad SOMA counterparts, and they’re bringing great new ideas into the startup ecosystem. They’ve got unique approaches to problems most adults couldn’t even perceive, and last Friday, they showed they have the skill and ambition to solve those problems.

The young hackers and entrepreneurs worked through the summer at the offices of Appcelerator, getting mentorship and help through the Teens In Tech program. They had their demo day at Silicon Valley’s Xerox PARC.

“What I notice the most with the teens participating in the Teens in Tech Incubator program is their enthusiasm,” said Appcelerator Jeff Haynie. “Not only are they all smart; they are passionate and excited. They truly want to build something great, so they’re experimenting more with technology and even new business models.”

Some of the most interesting businesses making their debuts today are ideas only a teen could have. For example, MySchoolHelp is a place for students to find and share notes. Its an effective way for them to interact and learn from their peers. Another youth-focused app in the batch is Bubbls, a summer doldrums-killing social platform that gives teens a list of friends who are available to hang out immediately.

One interesting idea from the batch was Workcrib, a photo-sharing platform for workspaces. It allows users to upload pictures of their workspaces or offices, discover others and discuss them. The founders also plan to add a tagging system so users can buy anything they like in the pictures.

BuildACircle is another Teens In Tech-bred app; it helps people recall their own memories at relevant times and locations. Codulous, an app sure to raise some interest among developers, is an online code editor that makes it really easy to code while on the go.

And finally, CM Studios is hoping to cash in on the casual gaming gold rush. The founders say their flagship project is Zombie Survival, “a wave-based zombie defense game. We plan to release numerous games in the future that appeal to different audiences.” 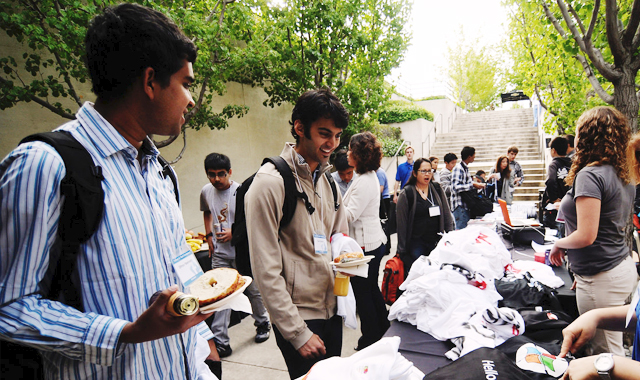 But for all their youthful vigor, the teens have the obvious downside of being born too late for the industry to truly embrace them without condescension or irony.

Matthew Linton, a teen who worked on the CM Studios project, told VentureBeat that being a very young founder was a double-edged sword. “We have the advantage of being part of the market we are advertising to. Most older entrepreneurs don’t have the insight into the market like we do.” However, he tends to see his youth as a disadvantage “because many people don’t take 15-year-olds seriously.”

But even though the teens might not be seen as seasoned pros, they do have — and sometimes play — the ever-novel age card. These prodigies know and sometimes exploit the fact that adults are curious about them to a large extent because of their youth.

“Any publicity is good publicity, and our age certainly brings us some publicity,” said Codulous co-founder Raphie Palefsky-Smith. But he also sees other advantages to teen entrepreneurship aside from pure shock value. “This is a time to experiment and learn,” he said. “Since I don’t have a mortgage to pay or food to buy, I can make risky decisions and figure out the hard way what works and what doesn’t.”

Palefsky-Smith hinted at a common theme among the young entrepreneurs, or at least those who want to have their cake and eat it, too. It almost seems some of these teens want to be treated seriously but penalized lightly if they fail. For all their passion and enthusiasm, the under-18 entrepreneurs still have to have their parents co-sign on all legally binding paperwork, for example. How can they learn real-world consequences with safety nets like these?

“It may seem counter-intuitive that I would like the freedom of a child but no consequences for my actions,” said James Maa, Bubbl founder and CEO. “However, my image as a teen entrepreneur would absolve me from blame externally. If I fail, other people would simply ascribe the fault to my age… But I personally hold myself accountable for all my actions. By joining this community, I express a tacit agreement that I will be responsible for myself and those around me.

“If everyone is to be treated equally in the startup world, everyone has to hold themselves responsible. So yes, it would be nice to be treated like an adult, even if I have to deal with consequences.”

“If one of these apps fails, they’ll probably learn the hard way since they haven’t had to face a similar failure,” said Teens In Tech founder Daniel Brusilovsky. “But they take that experience and use it for their advantage and really learn from it. that’s something we’ve tried to teach them this summer.”

After wrapping up the team’s summer of work, Brusilovsky said that while some of the companies that presented were ready to tackle the competitive world of Silicon Valley, “For others, this was a learning experience, and some only realized after demo day that they’re onto something.”

As for the question of whether these kids can get the attention of investors, Brusilovsky said, “We’ve been bringing [investors] in to meet with the teams, and a few have shown interest.” While he couldn’t specifically name which firms or startup teams were involved, he did reveal that none of the teen-led companies are asking for a seven-figure first round from a major VC firm just yet, and some of them would like to try bootstrapping rather than raising.

As far as company creation goes, however, Teens In Tech is far from a zero-sum game. At the end of the summer, Brusilovsky said the incubator was all about “empowerment, 500 percent.”

“We’re not Y Combinator or TechStars. we’re not here to make money and money only. Our goal is to empower billion-dollar entrepreneurs, not billion-dollar companies.”