Developing for Windows 10 might sound complicated. But 14-year-old Mihir Kasmalkar figured it out. Now he and his classmates at the Valley Christian Schools in San Jose, California — with a little help from Microsoft — are preparing to send a MinnowBoard Max running the Windows 10 IoT Core operating system up to the International Space Station.

From there, they’ll conduct science experiments on things like seeing how metals react to electromagnetic energy in space. They’ll rely on a robotic arm and a camera to take photographic evidence of what happens. The code running on the board is written in C#.

“I knew Java, so it’s a lot of the same things,” said Kasmalkar, who used a C# book and online resources like Stack Overflow to get up to speed. He and the others will be able to check out results of their experiments in real time using the Microsoft Azure public cloud — because the board is an Internet-connected device. They’re talking about the project today at Microsoft’s Build developer conference in San Francisco.

The sky is not the limit anymore. These innovative student #devs show us why. Meet the Space Kids. #Build2016https://t.co/KJ0XhfBXga

In the past few years, the research supported by the Quest Institute for Quality Education has relied on a primitive microcontroller that was programmed with PBASIC and packed with just a tiny sliver of memory. And it wasn’t connected to the Internet, so the kids have had to wait to see results.

Windows 10 IoT Core is one of seven editions of Windows 10. “It’s early,” Steve “Guggs” Guggenheimer, Microsoft’s corporate vice president of developer platform and evangelism and its chief evangelist, told VentureBeat in an interview, when talking about adoption of the operating system focused on the Internet of Things (IoT). But its predecessor Windows CE is running on all sorts of things — point-of-sale systems, bicycle rental machines, ATMs, vending machines. Windows 10 IoT Core runs on boards that are accessible to people in the so-called maker movement, including the Raspberry Pi 2 and the DragonBoard 410c. It turns out kids can work with this OS, too.

To be fair, Microsoft has offered some assistance to the kids, who even got to visit Microsoft headquarters in Redmond, Washington, and talk with employees, said 13-year-old Micah Kim. Engineers have contributed server-side code for the project, Kasmalkar said. They also designed a special shield that sits on top of the board to keep bits from being flipped, because that could lead to errors in results, said Danny Kim, the Quest Institute’s director of innovation. 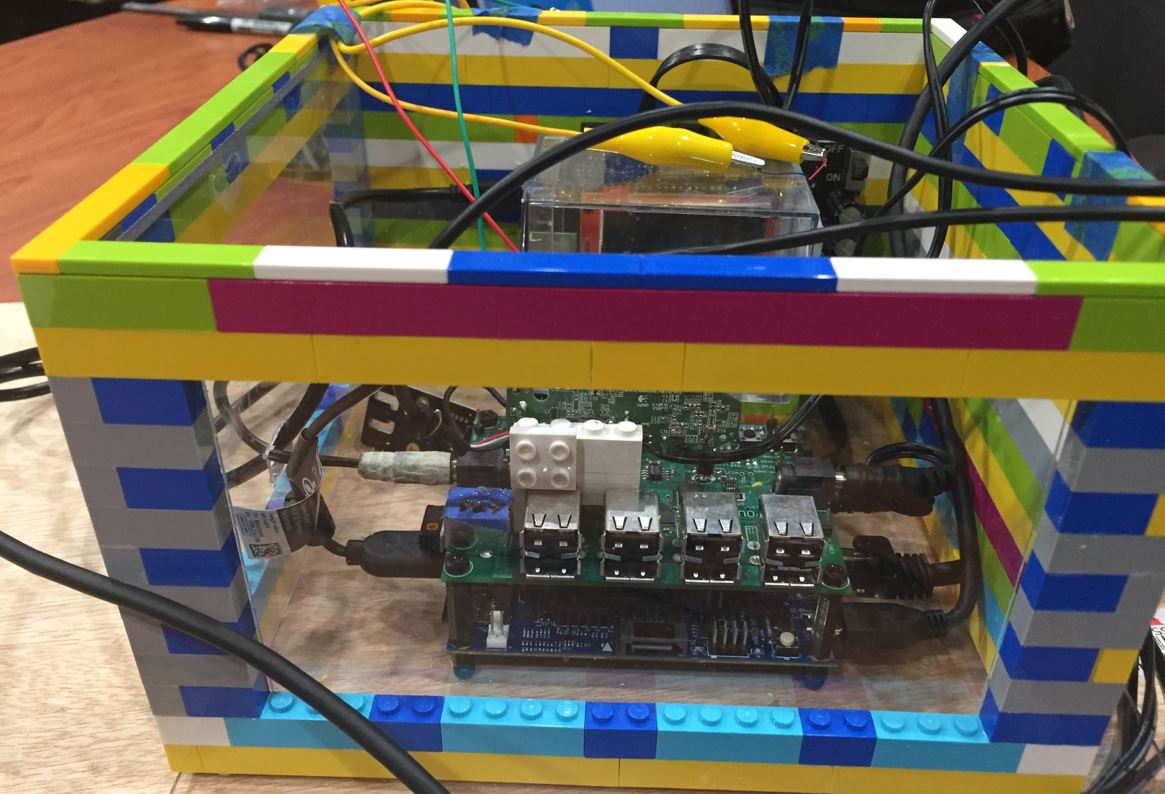 Above: The board and its special shield.

“What this shield did is it gave us the ability to have eight copies of the OS in eight different USB sticks,” Quest’s Kim said. “They created a custom hardware watchdog to see if the OS got corrupted … it would actually reboot to the next uncorrupted OS. It gave us a system to operate in the harsh environment of space.”

In this configuration, many experiments can run at once. That is, many schools can have their students prepare experiments that run on the board, instead of having to run their own infrastructure. This type of science learning becomes more accessible because it costs less money. In the future, Quest’s Kim said he’d like for student researchers to be able to submit changes to their experiments on the fly, from the classroom into space.

But for now, Megna Biederman, 13, is very eager to find out what happens when the experiment goes to space in late May or early June. 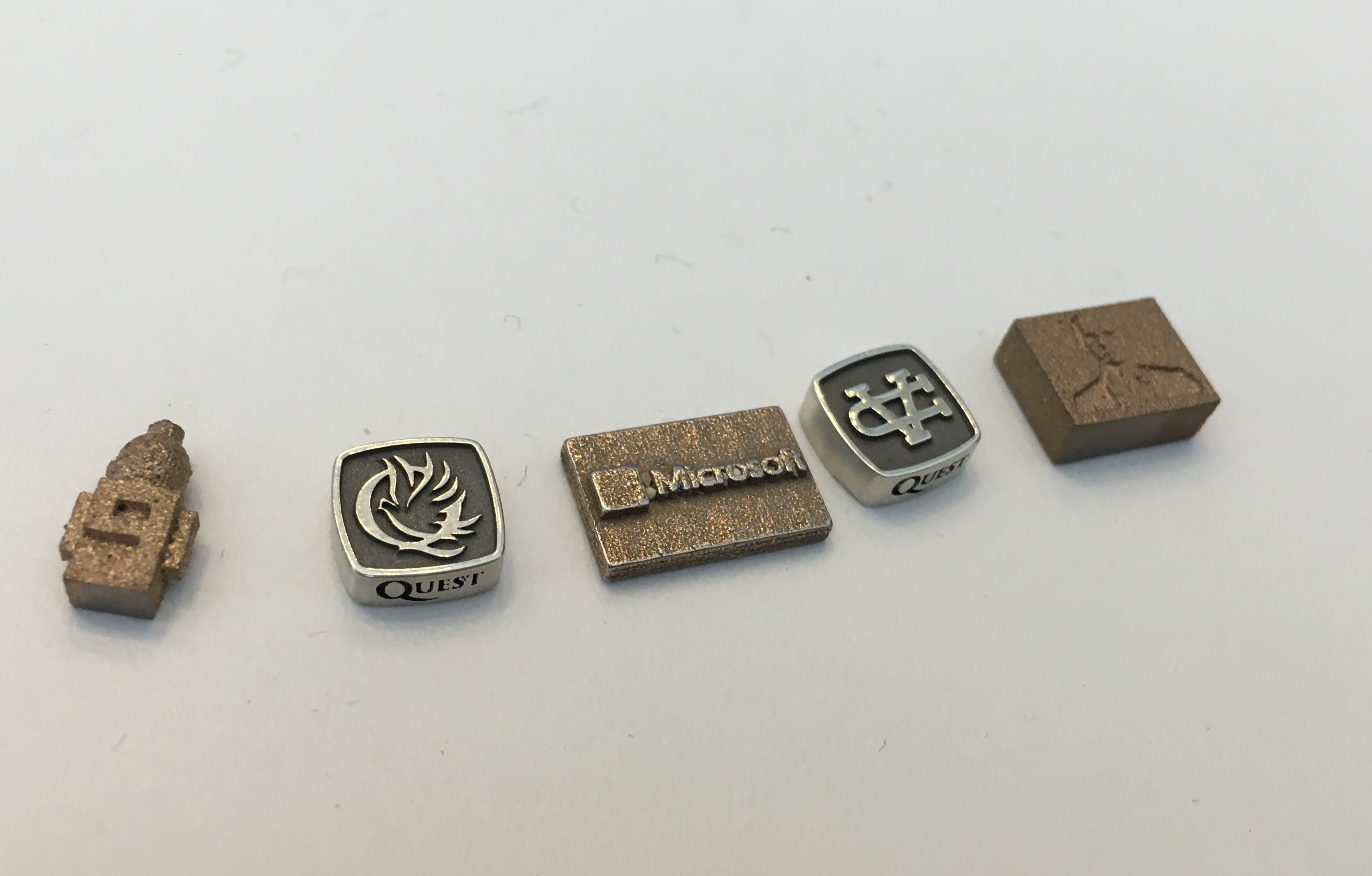 Above: Some of the pieces that will be tested in space. The one on the far left represents Microsoft’s Channel 9. The middle one is Microsoft’s logo. The one of the far right is a bust of Microsoft chief executive Satya Nadella. The second and fourth are logos of the Valley Christian Schools.

“We want to use this information on how it [metals] reacts to be able to fasten tools to help astronauts or help manage space debris, because that could be a danger,” she said.

It might all seem scary to have your work go into space. But the kids don’t seem to be scared.

“A normal Windows app wants to send data to a server,” Kasmalkar said. “It just loads it in Azure or sends it as an HTTP request. And that’s what we’re going to do on the ISS — because it’s just a Windows app.”