VentureBeat Editor Matt Marshall and I attended the Spring 2008 Y Combinator Demo Day yesterday, where we were both pretty blown away.

Okay, so I’m easy to impress, but Matt’s a tougher nut to crack — just ask some of the start-ups who’ve been on the receiving end of his criticism. Yesterday, however, both of us found ourselves constantly saying, “Wow, that looks cool.”

Y Combinator is a Mountain View-based incubator company that funds and nurtures early-stage start-ups, then unveils them twice a year at its demo days. Of today’s 19 presenting companies, here’s our roundup of the 10 most promising, innovative or just plain cool ones (our favorites, from top down), followed by brief descriptions of everyone else.

Matt and I argued this out between ourselves, and we also tried to get some sense of the buzz among others who attended. Still, these are just first impressions. If you’re impressed by any of the companies, let us know in the comments.

1. Deluux — Deluux’s goal is to bring the functionality of Facebook and other social networks to any page on the web. The company is in stealth, so all we can say is that it’s very promising. Co-founder Paul Mckellar says the company’s goal isn’t to replace Facebook, but rather to extend its “viral mechanisms” to the web at large (which is a vision that Facebook itself has, in some sense). Mckellar previously developed Socialmoth, a freestanding website that became a successful Facebook application last year.

2. 8aweek — 8aweek wants to make you (or, perhaps, your employees) more productive, and tracks your web-browsing habits to do so. There are plenty of other companies claiming to do this, including another one presenting today (see below), but what 8aweek adds is a bunch of other tools that will make greater productivity a reality. For example, you can draw up a list of sites you’ve identified as addictive, but giant time sinks (Myspace, Facebook, for example), and then set a timer that reminds you or even boots you off entirely when you’ve been on for too long (you choose when the timer goes off; see screenshot below). 8aweek does a lot more. It can also filter out a lot of the “noise” on a website by removing the items you’ve already read, and it can point you to those items and links that are the most popular. For a job like mine, where procrastination and research start to bleed into each other, I can definitely use 8aweek to make sure I don’t spend too much time on Valleywag. The service launched last month.

3. Wundrbar — Wundrbar bills itself as a next generation search bar. It looks a lot like the main Google page, but instead of just using the bar to search for results, it makes the bar a command line of sorts: For example, you can type “Amazon Harry Potter” and it’ll take you to the Amazon search results for Harry Potter. It allows you to perform basic tasks on other websites too, interpreting words in a way that is most intuitive. In some cases, you don’t even need to leave the Wundrbar home page — you can type “twitter going to san diego!” and it’ll automatically send out a Twitter message about your trip. The service is available now, and the company hopes others will use Wundrbar as a platform, adding the functionality of other websites. It wants to make money from referrals and targeted advertising.

4. FathomDB — We can’t say anything about this company, because it’s still in stealth mode, but keep an eye out. It’s definitely drawing a lot of buzz. A venture capitalist with DFJ remarked that it was his personal favorite.

5. 280 North — 280 North hopes to create a full suite of online tools that have the richness of desktop applications like Microsoft Office. So far, the company has made a PowerPoint-style presentation creator. The founders cop to the fact that they’ve aped PowerPoint’s interface, but the product benefits from being online. The great thing here is that you can build it all online, but ship presentations as PowerPoint files to people (something you can’t do with, say, a Google presentation).

6. SnapTalent — SnapTalent is an ad network for job listings. You can create rich-media ads and use the network to target specific sites by placing a widget on them — for example, Flash programming jobs on a Flash website, Ruby on Rails programming jobs on a Ruby site, and so on. In addition to targeting and ease-of-use, SnapTalent’s founders say their service’s other big advantage over job listing sites is that it allows companies to reach potential hires who aren’t actively looking for jobs, but who might make the leap given the right offer. (This seems to be a real need: I’ve covered a job listing site called NotchUp trying to reach the same audience by asking companies to pay applicants for interviews.) Yes, you say, there are tons of job recruitment and listing sites out there already. We agree, but many of them are still destination sites, and none of them have really locked up the market. SnapTalent has the honor of the being the first Y Combinator company in history to be profitable even before it gets out of camp. It has 4.5 million uniques a month already. The founders say large publications have approached them to put ads on their sites, as early as this week. Something’s working here.

7. Chatterous — Chatterous combines your different modes of communication — email, instant messaging and SMS. You use whatever mode you prefer, and sends messages to your friend in whatever mode they prefer. If you want to text your father, and he prefers email, that’s how he’ll receive your text message. Now, the basic idea sounds awfully familiar, but what’s cool about Chatterous is that most users won’t have to change their behavior at all. The person who want to use Chatterous does have to create what is called a Chatterous room. He then invites friends via those friends’ preferred modes of conversation. But those friends can continue sending and receiving messages by email, SMS or whatever, while the chat room brings brings everything together for the host. The site launched its public test last week.

8. Omnisio — Omnisio allows you to annotate, edit and share videos from any video site. Omnisio’s video compilation feature has similarities with Searchles (our coverage), but the whole interface is very slick. Among other interesting applications, the founders showed us how to grab portions of two different longish YouTube clips, and place them into Omnisio’s video interface, where you make a single video, then insert commentary, such as images or comments to go along with the video (like Viddler, it allows you to insert information at the bottom of a video screen as the video plays). The cool thing was that none of the video itself is moved away from YouTube’s servers — so Omnisio doesn’t host anything (avoiding bandwidth costs). It is a simple drag-and-drop interface. They also showed how a presentation could be synchronized with PowerPoint slides. The company is set to launch in a few days.

9. Insoshi: Insoshi is an open-source platform for creating networks. Ning has already grabbed plenty of attention and investor dollars in this area, but unlike Ning, Insoshi lets you host the social network yourself, which puts it into competition with other white-label social networks like People Aggregator. The availability of the source code may make Insoshi more palatable for larger companies wanting to build their own networks. Insoshi argues that all big enterprise software markets eventually get an opens-source competitor, and it plans to be the one for social networks. The big question: Can the company execute, with so many other social network providers already out there? The co-founders are certainly smart, both with ABs in Physics from Harvard, one having written a book on how to build a social networking site with Rails and the other with experience in managing developer communities.

10. MixWit — MixWit calls itself a combination of widget company Slide, and iTunes. Basically, it allows you to combine your personal media from different sites into widgets. Right now, the company focuses on mix tapes, of sorts, that you create by locating songs via the search engine Seeqpod and sharing them with your Facebook friends. (See screenshot below.) It will now expand to other media such as Flickr and Facebook photos. 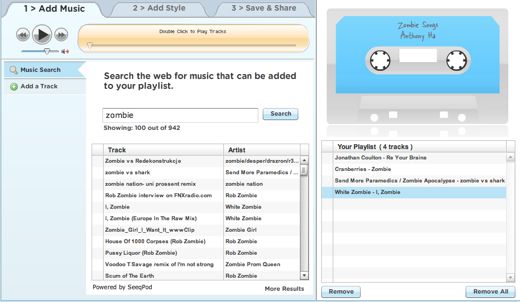 Addmired: Addmired uses a Hot or Not style interface to bring traffic to user profiles on social networks.

BaseShield: BaseShield is a security program for Windows PCs that uses virtualization software to limit the damage done by viruses.

RescueTime: RescueTime wants to increase productivity by showing exactly how you or your team is spending time online.

MightyQuiz: MightyQuiz is a user-generated trivia game that can cover any topic, and which can be distributed to other sites via widgets.

Tipjoy: Tipjoy wants to dramatically increase the use of micropayments by separating the act of making the tip with the act of paying. You can leave a tip just by entering your email address, then go back later and pay your bill when it’s convenient.

Kirkland North: This company is trying to spread a Risk-style game called Turf. Apparently, it’s already a big hit at Harvard and Yale, and it’s spreading at Stanford. The business plan seems a little bit vague right now, but as the company is eager to point out, tapping into a big audience at top colleges worked as a starting place for Facebook.

WebMynd: WebMynd is a browser extension that saves all the web pages you visit. It was initially conceived as a “Tivo for the web”, giving you an image of every page you’ve been to, but the founders discovered that the saved information is a great way to improve search generally, by directing you to relevant pages you’ve already visited.

YumDots: YumDots uses a map interface to help you locate good nearby restaurants on your computer or mobile phone. At first, this sounds like just a Yelp imitator, but YumDots’ mobile interface seems much more intuitive than Yelp’s.

Matt Marshall and Eric Eldon contributed to this article.