The Pixelworks Soft Iris solution builds on four prior generations of commercially-proven display software utilized in the company’s Iris family of visual processors for mobile devices with both AMOLED and LCD displays. Soft Iris provides ROG Phone II users with a superior viewing experience, including what it calls the “most color accurate display” in the industry. It can display up to a billion shades of color.

“Following the success of our first gaming smartphone, our ROG loyal fans expect second-to-none display quality from Republic of Gamers to enhance their gaming and entertainment experience,” said Bryan Chang, head of the phone business unit at Asus, in a statement. “We are glad to continue our partnership with Pixelworks in order to provide the most accurate, feature-rich visual experience available in the mobile gaming industry.”

“As the first partner to launch a smartphone with our new Soft Iris solution, ROG is taking visual quality to the next level for gamers with our industry-leading color accuracy and HDR tone mapping,” said Anthony Gioeli, executive vice president and general manager of video devices at Pixelworks, in a statement. “Gaming enthusiasts are demanding better displays and more realistic visual detail on their mobile phones. We are excited to have worked closely with ROG on this development and set a new standard of display quality in the mobile gaming market.” 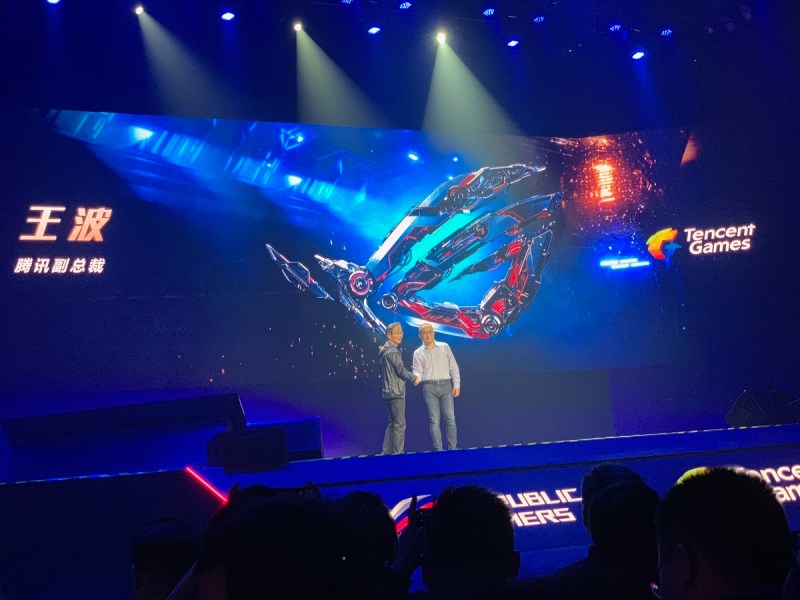 Above: Tencent unveils the Republic of Gamers Phone II in Beijing.

Sentons has unveiled the SurfaceWave Processor and a customized sensor module for the Republic of Gamers (ROG) Phone 2 — Tencent Games’ customized version. Sentons worked closely with Asus’ ROG to create a novel experience with virtualized controls.

As a result, Senton’s customized ultrasonic sensing module paired with its SurfaceWave Processor, which powers the key new feature, AirTriggers, in the ROG Phone 2.

AirTriggers are a set of sensors mounted on the inside edge of the ROG Phone. These sensors virtualize the shoulder buttons of a console-based gaming controller and provide extra inputs for enhanced interactivity in gameplay. AirTriggers are software-defined and require very low activation force — as light as 5 grams of force, or the weight of a pinch of salt — and yet, able to reject false triggering from flexing the phone. 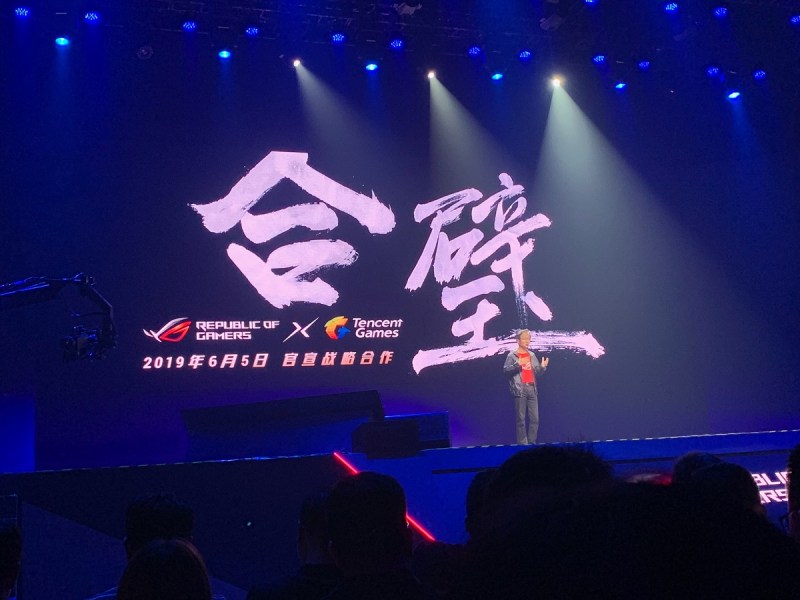 Above: Tencent has revealed the Republic of Gamers II smartphone for gamers in Beijing.

This highly sensitive yet selective control actuates with a simple light tap or swipe, and ultimately gives a deeper experience and more engaging gameplay.

“We’re thrilled with delivering such breakthrough capabilities to ROG Phone 2 to surprise and delight mobile gaming players,” said Jess Lee, president and CEO of Sentons. “After living with the same capacitive touch screens for over 12 years, the human-machine interface for the rectangular slab we all hold so dear — our phone — has finally taken a major step forward.”

In a statement, Asus said, “The ROG Phone 2 is an anticipated game-changing product that takes advantage of the best-in-industry technologies in processor speed, HDR screen display, and aesthetic visuals from Asus, and ultra-responsiveness from Sentons’ AirTriggers.”

And Tencent Games said in a statement, “Through continuous innovation and efforts of our game developers, Tencent Games has developed many popular games for gamers. We are confident that this partnership with ROG will drive the integration of superior content and best-in-class hardware to provide more exciting gaming experience to gamers.”

The release of this sensing technology is the first step along Senton’s broader deployment of their SurfaceWave Processors for mobile gaming and computing platforms. Ultimately, this leads to all surfaces of a device being interactive, and where developers will have the luxury of Software Defined Surfaces (SDSs).

With SDSs, game and app designers can dynamically create different interfaces (such as buttons, sliders and jogwheels) and even capture ambient usage modes (handed-ness detection) by leveraging precious yet wasted device surface area. As mobile phones get physically larger and applications become more complex, extending the user interface to all areas of the device will become critical.