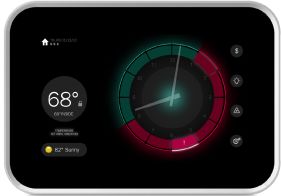 Home energy management company Tendril announced it has acquired GroundedPower, a software company that focuses on behavioral-based engagement of consumers.

Terms of the deal were not disclosed. The company also announced it has raised $23 million in a fourth round of financing. Investors include TIAA-CREF, Good Energies, VantagePoint Venture Partners, RRE Ventures and GE.

“The backdrop of all of the last two to three years in smart grid has been about plumbing,” said CEO Adrian Tuck in an interview with VentureBeat. Tendril specializes in such plumbing — the company makes a platform that connects utilities and customers through its associated home energy management software and hardware. “We’re finally — belatedly, in my view — getting into consumer view about how to get consumers to play into these systems.”

That’s where Massachusetts-based GroundedPower comes in. GroundedPower competes with companies like OPower, which helps utilities meet efficiency goals by managing consumer engagement. Like OPower, it uses behavioral science to engage and motivate customers to reduce costs. GroundedPower has rolled out its iCES product across New York state and Cape Cod, where it got pilot participants to achieve 9.3 percent energy savings.

The software, which users can access online or through a smartphone, starts with two simple questions to get a sense of what motivates the customer to save energy — a pointed counter to what Tuck says feels like “thousands of questions” posed by Microsoft’s Hohm. The software gradually builds a conversation with users, asking questions over time, offering insight about energy usage, and eventually suggesting ways to save money and offering products and services customers can tap into, like a smart thermostat or an air conditioning fix.

“The smart grid industry has been laboring under the idea that consumers have been kept in the dark about their consumption, which is true. What’s not true is that the immediate response is to bombard consumers with data,” Tuck said. “Not all consumers want to interact with these systems every day. Finding non-disruptive ways to get consumers to interact with this technology is going to be key.”

Tendril will offer a new product that integrates GroundedPower’s capabilities in the first quarter of next year.

Getting consumers to turn green is certainly a matter of human psychology — some companies have tried using the carrot; others, the stick. Some cities, for example, impose a tax on plastic bags. Washington, D.C., has found that policy effective in cutting down plastic bag use, although the Wall Street Journal argues that it’s guilt, not the fee, that elicits results.

In the case of commercial users, utilities simply dangle financial incentives for buildings to cut energy use during peak load times. It’s a hot area called demand response that Comverge and EnerNOC have been especially effective in.

GroundedPower’s team consists of engineers with backgrounds from NYU and Microsoft labs. Its founders, interestingly, were behind a top smoking-cessation website. Smoking cessation, weight loss and energy efficiency are all areas in which “consumers are keen to see reductions but find it very difficult in practice to know where to begin and how to make change persistent,” the company said in a statement.

“We talk about insight, choice, and control. Ultimately that should end up with consumers controlling things,” Tuck said. “Consumers really just want to be told every now and then, ‘Here’s some things you can do.'”