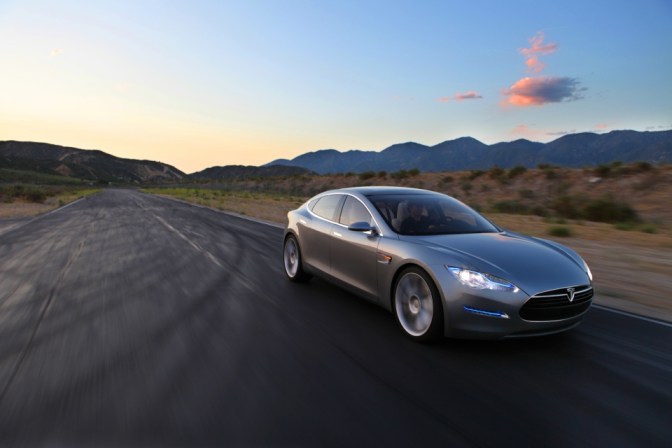 Electric-car maker Tesla Motors announced this week an update to its plans to deliver its Model S sedan, a hotly watched launch for the company.

It’s not just electric-car fans who are itching to hear the progress on the Model S (pictured), which starts at $57,400 before federal tax incentives. Investors are watching the Model S’s progress closely too. This represents the first time Tesla is building a car from scratch, and the company aims to ramp up to a capacity of 20,000 of Model S cars a year by 2013.

Investors are looking for Tesla to hit the benchmarks it has set for itself. Tesla has to get the $42 million former NUMMI factory up and running, train hundreds of new hires and actually become a successful startup in the auto manufacturing business. The factory is meant to be a future ground for other Tesla models, too.

But most crucially, Tesla needs to deliver the Model S on time. The car is due out in mid-2012.

“They still have a long road to execute,” Driscoll said. He’s something of a skeptic, though — last year he issued a price target of $22 for the stock, causing it to slide. It’s now trading around $24.

Here are some key points to keep in mind as we track Tesla’s progress this year and next:

TSLA stock still has a great deal of short interest

Tesla’s stock still continues to attract a lot of short interest, or investors seeking to profit from a drop in its price. As of Feb. 28, Tesla’s short interest was nearly 10 million shares, while its average trading volume was 2 million shares. That means buyers looking to bet against the stock outnumbered sellers nearly five to one.

Tesla will have to start paying back its loans by 2013

The company received a $465 million loan guarantee from the Department of Energy last January. Up to $101.2 million was available under the first term loan facility to finance 80 percent of the costs for its powertrain facility. The remainder, $363.9 million, was intended to finance up to 80 percent of the development and manufacturing facility for the Model S.

The cash it owes for the Model S funds will be repayable in 40 equal quarterly installments starting Dec. 15, 2012. If it takes advances out of that loan facility after that date, then the advances will be due in 38 equal quarterly installments starting on June 15, 2013. All outstanding amounts under the Model S Facility will be due and payable on the maturity date of Sept. 15, 2022.

In the case that Tesla can’t meet those payments, though, it’s unlikely the DOE would allow the company to default. The DOE recently restructured its loan terms for troubled solar company Solyndra, including extending the amortization period for the loan, according to VentureWire.

The company is targeting high growth this year. It will be looking for revenues in 2011 to hit $160 million to $175 million. It also expects Roadster sales to grow.

It’s unclear how many Model S prototypes have been built

The company has completed at least one prototype by January, and CEO Elon Musk says he drives a prototype to work every day. Carmakers need to build at least 20 prototypes just to pass crash test ratings. With the Model S due out in mid-2012, Tesla arguably needs to have a full fleet of validation prototypes built soon.

Tesla is looking to raise another $150 million, likely through a secondary market offering, to fund the development of the Model X, an all-electric SUV due to be unveiled this year. Driscoll points out that will add to Tesla’s debt load. Some have wondered whether all of the cash will go towards the Model X or, in reality, to complete the Model S.

Tesla plans to sell another car for $30,000 in the next few years

Musk said in January that Tesla will build such an electric car within four years, so that means such a car would be due out by 2015. The price point would be pretty impressive for a luxury carmaker like Tesla — the Nissan Leaf starts at $32,780. With loan payments come due in 2013, don’t be surprised if the company will look to raise more cash to fund the development of the mystery car.