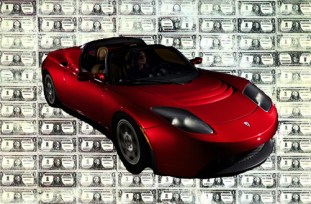 With an unusual lack of fanfare, Tesla Motors announced today that it has crossed into profitability — banking about $1 million of the $20 million in revenue it brought in last month. It attributes the achievement largely to the July delivery of 109 of its $109,000 roadsters, as well as a better cost margin on its second iteration of the vehicle.

The San Carlos, Calif.-based electric car company says its sales figures are simply a precursor of more to come — particularly in Europe — before the end of the quarter. Chief executive Elon Musk congratulated his troops on finding more cost-effective ways to build the cars. Still, the fact that the company entered the black during the same month it opened swanky showrooms in Seattle and New York (priced at between $235,000 and $258,000 a year), is pretty impressive.

Of course, it was helped in no small measure by the $465 million in federal loans it received from the Department of Energy in June to continue development of its Model S family sedan. Even though Tesla says the $1 million profit (and the $20 million in revenue) was not influenced by the loan, the government sponsorship probably had something to do with boosting consumer confidence — at the very least.

Musk forecasted profitability for the company back in June when news also broke that he and Tesla were both being sued by its founder, Martin Eberhard, for slander, delivery of damaged goods and more of the like. Not only was he apparently right in his prediction, but Eberhard has since been smacked with a ruling that he is not technically one of the company’s two founders as he claimed. Instead, the San Mateo Country Superior Court judge ruled that Tesla was the brainchild of a team of people — a team that incidentally includes Musk. Still, Eberhard is moving ahead with the lawsuit, seeking $100,000 in severance pay in addition to other damages.

The announcement of profitability is almost a full 180-degree shift for a company that — as recently as November 2008 — was plagued with rumors that it only had $9 million left in the bank and would have a tough road to hoe after the downturn. The company soon silenced critics with a $40 million round of capital that kept the ball rolling. And now it’s seemingly back on top again, partnering with Daimler and sitting at the same table as Nissan and Ford when it comes to government support.