But last week’s call was a first: The bulk of the questions by financial analysts weren’t about the company’s electric cars.

Most of the questions delved into the recently-announced Tesla Energy and its Powerwall home-energy storage systems.

The response to Tesla’s announcement of battery packs for home, commercial, and utilty-scale energy storage has been “crazy, off the hook,” Musk said on the call.

Indeed, he said, as of last Wednesday, the company has already received 2,500 reservations for its Powerpack commercial and utility-scale storage packs.

Each of these orders typically includes around 10 individual packs, meaning the total one-week reservations represented 25,000 packs.

That number is dwarfed by the 30,000 reservations for its Powerwall home-energy storage products, which “we suspect will be one and a half to two [packs] per installation,” Musk said.

Togther, those orders would be more than half the number of packs used in Tesla’s total vehicle production since 2008.

“There’s no way we could possibly satisfy this demand this year,” Musk admitted. “We’re basically sold out through the middle of next year.”

He also said Tesla had more than 2,500 requests from companies that want to distribute and install the home and utility packs.

“We’ve had to triange those requests,” Musk said. “We can’t even respond to the e-mails.”

The demand for storage batteries is such that it could represent twice the energy demand of Tesla’s car business, he said.

But Musk cautioned that such a number was only an estimate.

So then could Tesla Motors “go the other way,” one analyst asked: Could it move from being a car company to becoming a battery company?

The company has looked “really long-term” at the total energy capacity needed “to build solar renewables for the world–transport, heating, cooling, industrial use, etc.” and to convert all current hydrocarbon use to electricity.

Transportation use represents about half the total energy storage required for that goal, he said.

“Ultimately we think things will get there,” Musk said, although “it will take a long time”–but that’s the source of the widely quoted number of 2 billion powerpacks needed globally.

“How it tracks between now and then,” he noted, “is difficult to predict.”

Indeed, energy storage “might be a better market than automotive,” Musk acknowledged.

But he cautioned that more time is needed for Tesla to figure that out. “It would be nice to get a couple of quarters of experience” with storage-pack demand and production, he said.

After that, “our degree of uncertainty will diminish significantly–it’s super-speculative at this point.”

“But there’s just no way we can meet the demand we’re seeing right now,” he said. “It really feels like the stationary-storage demand is just nutty worldwide–it’s just crazy.”

Pressed further by the same analyst about the company’s priority if he had to choose one or the other, “I guess we’d pick cars,” Musk said.

“We’ve got this whole other plant in Fremont–that’d be the logical priority” to keep in production as well.

Other parts of the earnings call covered progress on the company’s cell and battery assembly “gigafactory” now being constructed outside Reno, Nevada.

That plant will “start producing initial quantities of battery packs in 2016,” according to the Tesla shareholder letter that was released just before the call.

“Together with Panasonic,” the company wrote, “we now expect to start complete battery manufacturing, from cells to modules to battery packs” next year.

Meanwhile, volume production for the home and commercial battery products is expected to start during the third quarter of this year at Tesla’s car assembly plant in Fremont, California.

That production will then expand to the gigafactory during the first quarter of 2016.

And there are benefits to the added volume regardless of which cell is produced, Musk noted. “There are still lots of production process similarities” between the auto cells and the Powerwall cells.

Tesla had projected a total of 35 gigawatt-hours of battery production at the gigafactory, Musk said.

Of that 35 GWh, the company originally expected about 15 GWh to go toward energy-storage products.

“We’re trying to figure out if we can go 50 percent more than that,” perhaps even higher.

“We’re fairly confident we could devote the entire gigafactory to stationary storage,” Musk said, “but we make cars too.” 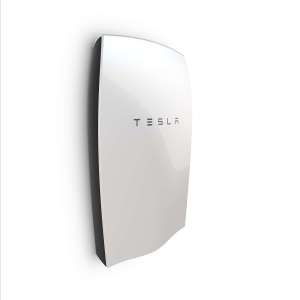 Above: The Tesla Powerwall battery.

Musk spent some time on the call explaining the differences between the two different energy storage products.

The Powerpack is for energy backup, he said, and uses a nickel-cobalt-aluminum cell chemistry that’s very similar to that used in the company’s electric cars.

That’s a high-energy pack that lets utilities replace their “peaker plant” generation capacity with stored energy, helping them to absorb temporary peak electricity demand that can be as much as five to 10 times as high as their steady load.

Tesla has seen “lots of utility company interest” in this product, which Musk said is “very cost-competitive” against temporary generation from high-cost peaker plants.

This will be the largest use of energy storage, he suggested, with the company seeing “five to 10 times more megawatt-hours…deployed at industrial scale” than for the consumer-focused Powerwall products.

That Powerwall pack is designed for daily cycling, and uses a different nickel-manganese-cobalt cell chemistry. Telsa expects the packs to be used for 5,000 cycles, once a day, over a 15-year life.

Musk acknowledged that SolarCity, the solar-installation company whose board he chairs, is not buying the 7-kWh Powerwall product.

He noted that SolarCity now operates only in the U.S., where although “some people want the independence” of being able to go off-grid completely, it remains more expensive to do so than to pay the utility rates in most regions.

Based on the electricity-rate structures and feed-in tariffs in countries like Germany or Australia, Musk said, the Powerwall already makes economic sense–and those will be the first main markets for the Powerwall.