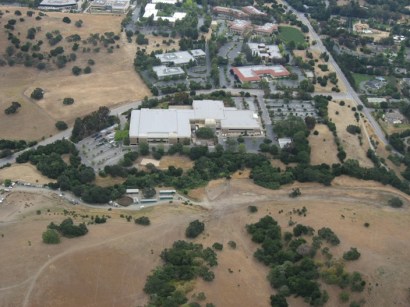 Tesla Motors announced today that it will base its new powertrain assembly plant in the Stanford Research Park in Palo Alto, Calif., as well as relocate its headquarters to the same area. In doing so, the now San Carlos, Calif.-based electric car company is playing up the historical significance of its new site as the birthplace of Hewlett-Packard, Xerox, Facebook and other Silicon Valley legends.

However the car maker still hasn’t announced the news everyone’s really been waiting for — namely the location of its new Model S assembly plant. The company says the facility will definitely be in California, but won’t divulge more, adding only that it’s in negotiations and will make its choice public soon. With up to $365 million in federal loans riding on the answer, it’s a pretty big question. (That’s the amount Tesla said it would set aside for the plant after receiving $465 million from the U.S. Department of Energy in June). The facility is expected to create 1,000 jobs when it hits full production in 2011, enough to bring substantial change to its surroundings.

Tesla’s Palo Alto powertrain factory (a facility specifically for building auto engines, transmissions, and driveshafts) is also being paid for with DOE loans. The facility will initially employ 350, but could scale up to a staff of 650. Tesla is leasing a 369,000-foot, three-building complex once used for manufacturing by Hewlett-Packard and Agilent Technologies — which covers 23 acres on Deer Creek Road (for those who know the area). There, it plans to produce powertrains and other electric vehicle components not just for its own cars, but for other automakers (read: Daimler), hoping to boost revenue and expedite the commercial adoption of electric vehicles. The company says it will start on construction to convert the facility for its needs this fall.

Tesla has been on a roll for a while now — starting first with the announcement of its lucrative partnership with Daimler, and continuing through the award of DOE loans, the opening of swanky new showrooms in New York and elsewhere, and the recent report that it hit profitability in July due to high roadster sales. It’s now delivered almost 700 of its sports cars to customers. With all of these wins under its belt, Tesla says it’s now looking to recruit fresh headcount to staff its new home.