Tesla has announced the public beta release of its first version of Autopilot, which will be available on Thursday. Company chief executive Elon Musk said that every one of its vehicles from September 2014 will have this feature overnight. However, in the short-term, he cautioned that it’s very important that people “exercise caution,” and that they keep their hands on the wheel. But in the long-term, prospects look good.

Musk shared that the newly labeled Autosteer feature employs a variety of measures to keep the driver on the road while offering a great driving experience. Importantly, it utilizes a deep learning algorithm to help the vehicle perform better. This is somewhat amusing because Musk has made it clear how he feels about artificial intelligence, though he joked: “I don’t think that we have anything to worry about with cars driving themselves. They’re not going to take over the world.”

During this next phase, Tesla is relying on feedback from its customers to help it improve. “Each driver is a trainer in how the autopilot should work,” Musk said. There are some things that the vehicle may not be completely prepared for, like always recognizing stop signs and traffic lights, but future versions will address these issues. Musk said that Autosteer has been in testing for over a year. 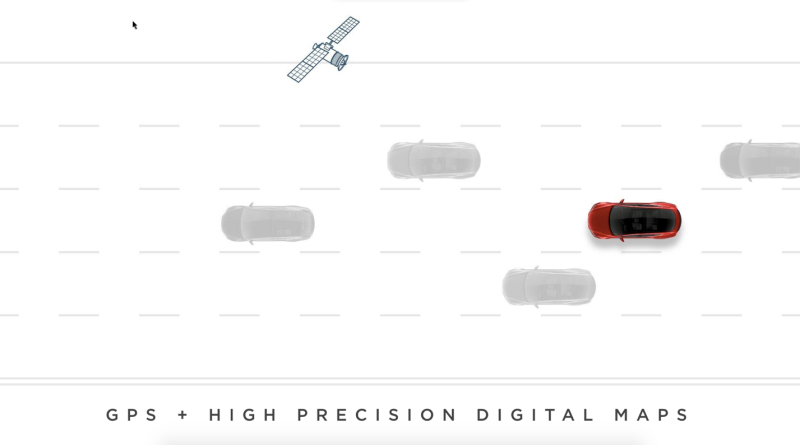 Vehicles will rely on four major sensor systems. The first are ultrasonic sensors that Musk says will tell the computer what’s around the perimeter of the car (a 16 feet radius). The second sensor comes from the forward-facing camera and helps determine where the lanes are and what cars are ahead of it. It can also read speed signs. Other data points come from the forward radar that’s used to detect fast-moving objects and which can see through rain, fog, and dust, as well as pulling from GPS and high-precision digital maps. How will Tesla’s autopilot fare against poorly drawn lane markings on the road? Musk said that originally the system couldn’t figure out where the lane actually was, so, to compensate, the car will ignore the visual sensor and rely on navigational GPS.

Other changes that will be coming with Tesla’s version 7.0 software update are automatic emergency steering and side collision warning, which will alert you if an object approaches the side of the car. Tesla Model S vehicles will also have the ability to auto-park, so you no longer have to worry about parallel parking.

Musk had teased the announcement about auto-driving earlier this week, saying that Tesla’s version 7 software would include Autopilot. This capability was even talked about in 2014 at a press event at the auto manufacturer’s facility in Southern California. It’s been thought that Tesla’s Model S would be the first vehicles equipped with Autopilot mode, but it’s likely that all Tesla models will soon have this capability.

Previously, Musk shared that his company has tested this mode on a route from San Francisco, California to Seattle, Washington. At the time he proclaimed: “We’re now almost able to travel all the way from San Francisco to Seattle without the driver touching any controls at all…That’s a feature that requires a lot of validation testing, but we’re hoping that we can start releasing the first sort of auto-steering features in about three months or so.” That was in March, so it’s taken more like six months. However, it’s still a big milestone for Tesla and for fans of its vehicles.

Tesla’s foray into self-driving cars comes as more companies try to get into the space, both from a self-driving and an electric vehicle perspective — including the likes of Uber, Google, and of course Apple. And Musk hasn’t shied away from telling the world what he thinks about these competitors. In an interview with Handelsblatt, Musk called the iPhone maker a “Tesla Graveyard” for engineers who just can’t cut it at his company. Of course he quickly backtracked, saying that Apple was a “great company with a lot of talented people.”