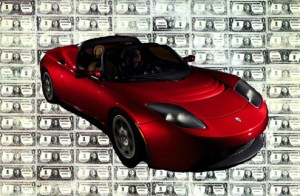 On a day when the Dow and the Nasdaq were in the red, Tesla Motors, the Palo Alto, Calif.-based electric-car startup, saw shares of TSLA climb slowly but steadily. Shares in the company’s initial public offering were priced at $17 last night by the offering’s four underwriters, but the first trades today went for $19. The price just this second, at 8:30am Pacific, is hovering in the $17-18 range.

Tesla’s debut marked the first IPO of an automaker in the U.S. since Ford’s 54 years ago. The company’s stock priced at $17 a share last night, exceeding the expected range of $14 to $16, with the potential to rake in $226 million and value the company at $1.6 billion. After an IPO, underwriters have the challenge of matching investor demand with supply of shares to set an opening price for trading. In Tesla’s case, that didn’t register until more than two hours after Tesla CEO Elon Musk rang the bell to open the Nasdaq.

The question now becomes how Tesla will perform in the weeks and months to come. Almost universally, analysts have predicted the stock to soar during its first few days before dropping off as excitement fades and the reality about the company and where it stands with its products starts to sink in.

A key test for the company will be how investors react to its second-quarter earnings report, its first as a public company. Sales of Tesla’s sole product, the $109,000 Roadster, have been disappointing as the company has largely tapped the potential pool of superwealthy buyers. Tesla has generated some sales by expanding into new international markets, but the one-time sales generated by satisfying waiting lists country by country are unlikely to be repeated.