Tesla stock is up $6.45 today to $103.40 as CEO Elon Musk hinted about a low-priced entry-level car to compete with Nissan’s Leaf.

Tesla recently had its first-ever profitable quarter after 10 years in business, fully repaid its government loan ahead of schedule, and won the highest Consumer Reports test rating of any car in the industry for its luxury Model S.

The Model S, however, will suck your bank account to the tune of $80-90,000 — hardly a mass-market car. Which is why Musk promised a month ago to bring out models for the average American car buyer.

And today, he said, that car would compete with vehicles like the Leaf — the cheapest electric vehicle on the market, at just under $30,000.

Tesla stock has had an amazing three months, blasting above $100 from the low $30s just in March: 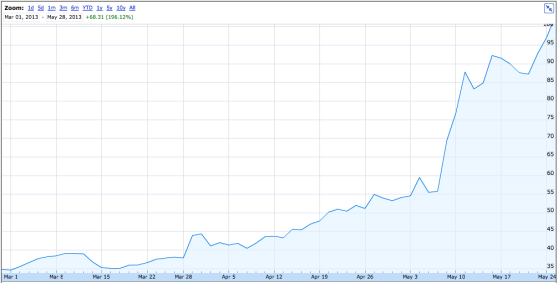 Part of the stock run-up is probably due to the fact that Tesla is in some sense the last man standing.

Competitor Fisker went belly-up in April after burning through $1.4 billion in federal and private money, spending $900,000 for each vehicle it produced, and losing its co-founder, chairman, and designer Henrik Fisker. Lesser-known Better Place burned through $850 million trying to build battery-swapping stations for electric vehicles. And the big-name car companies haven’t exactly seized the electric opportunity with both hands, with slow sales of most models.

So now, with a market cap in excess of $12 billion, Tesla is worth almost a quarter of the venerable General Motors.

That might not be sustainable, but it is a bet by Wall Street that electric — and green — is the future of transportation.