A new landing page has been set up to celebrate this milestone, too, equating the mileage to “4,186 trips to the moon” or a “2,000 year road trip,” while also reminding us that one of the vehicle’s core selling points is its benefit to the environment — “570,000 tons of CO2 prevented” and “10 years of pumping gas,” it proclaims. 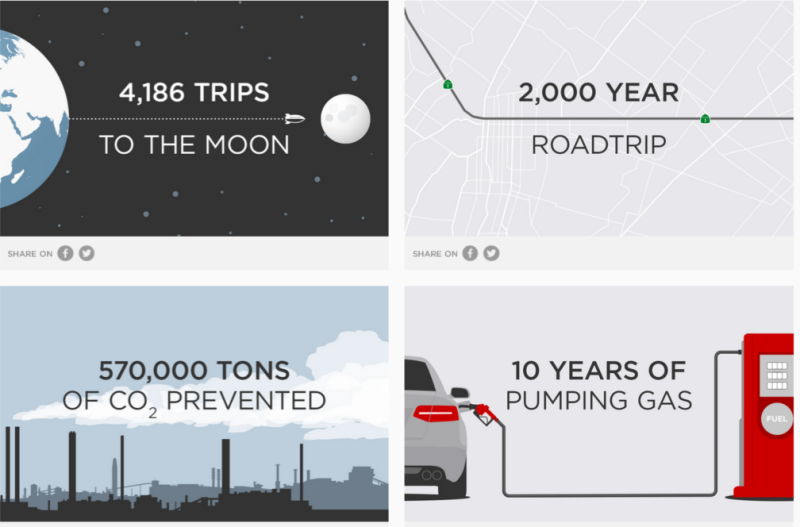 Founded in 2003, Tesla came to prominence initially with the Roadster, which was one of the first all-electric sports cars to hit U.S. highways en masse when it rolled out of production in 2008. Tesla has produced a handful of electric vehicles since, including the upcoming Model X, but the Model S has emerged as one of the best-selling plug-in electric cars, ousted only by the Nissan Leaf in 2014.

While Tesla doesn’t disclose its vehicle sales numbers on a monthly basis, reports suggest the company has shifted around 75,000 Model S cars since they went to market in 2012, which would make it the third best-selling plug-in electric vehicle of all time around the world. Interestingly, the Model S became the first electric vehicle to come out trumps in total new car sales in a single month in a whole country — in September and December 2013, both times in Norway.

After 10 years in business, Tesla turned its first profit back in 2013, and earlier this year the company reported its best-ever quarter, selling 10,030 cars in Q1 2015, representing a 55 percent year-on-year rise.