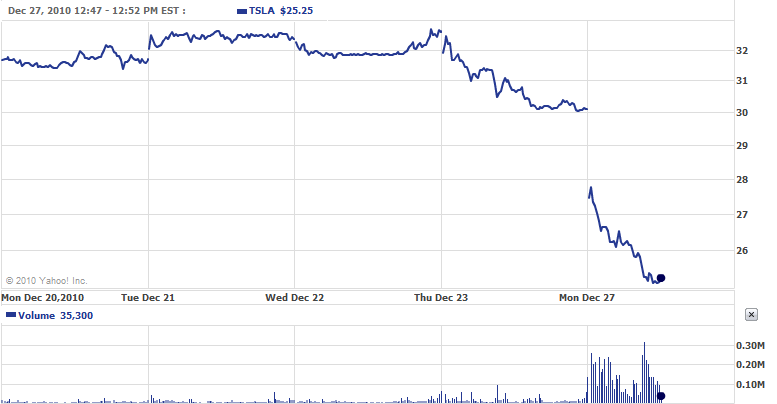 As VentureBeat suggested on Thursday, the entry of new shares onto the market today has caused Tesla’s stock to drop.  The stock is trading down 16 percent today now that the 180-day post-IPO lockup period has ended and insiders are free to sell their shares.

The stock is trading at $25.30, down 16 percent from its Thursday close of $30.09. CapitalOne Southcoast today placed a “sell” rating on the stock. The Silicon Valley electric car company’s stock took an 8 percent tumble Thursday when Capstone analyst Carter Driscoll downgraded Tesla shares to a “sell” with a price target of $22.

Brian D. Pacampara of The Motley Fool echoed Driscoll in pointing out that Tesla faces tough competition from major automakers:

“I wouldn’t be so quick to pounce on today’s plunge. Double-digit declines over imagined insider dumping aren’t worth getting worked up about, but when you consider that Tesla lacks any real scale to compete against green-focused giants Ford and Nissan, I know I’d be selling at the first opportunity. With skepticism steadily growing on Wall Street about just how fast Tesla will be able to grow, Mr. Market might not be ready to support the flood of new shares.”

It’s not like Mr. Market didn’t have warning: 180-day lockups are standard parts of new public stock listings. In a 10-Q SEC filing, Tesla disclosed that 75 million shares will be released by the lockup and that it currently has 93.25 million outstanding shares, Forbes noted. In the filing, the company anticipated the drop, too. The company acknowledged the potential price drop on Dec. 27, and that its stock price would be volatile:

“The stock market in general, and the market for technology companies in particular, has experienced extreme price and volume fluctuations that have often been unrelated or disproportionate to the operating performance of those companies. Broad market and industry factors may seriously affect the market price of companies’ stock, including ours, regardless of actual operating performance.”

That the stock can be unpredictable is true. Tesla’ stock has had a high of $36.42 and low of $14.98. Despite posting losses in the third quarter, the stock closed at a record $33. And its blockbuster IPO — a $17 June offering that jumped 40.5 percent in the first day of trading – happened in the midst of a lackluster cleantech IPO season. And in a practically unheard-of aberration, the IPO bucked market trends with a successful debut the same day the Nasdaq and S&P had their worst days of the year.

As we noted Thursday, there has been a tremendous amount of short interest on the stock, with buyers looking to bet against the stock outnumbering sellers six to one as of Nov. 30.