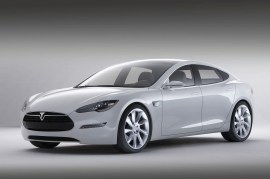 Greentech Media has broken news that electric vehicle heavyweight Tesla Motors has chosen Panasonic to supply the battery packs for its Model S sedan, its more affordable model, still in development — this, according to anonymous sources at Panasonic.

This slipped out less than a week after Panasonic’s announcement that it has discovered a way to bind lithium ion batteries traditionally used in personal computers into packs suitable for powering cars. The Japanese company’s foray into the automotive market gained momentum last December when it purchased Sanyo, one of the biggest lithium-ion battery makers in the world. But even before then, it teamed with Toyota Motors in a joint venture called Panasonic EV Energy.

Last week, Panasonic said that it will take about four years to commercialize its car battery technology. Considering that Tesla wants to launch the Model S by the end of 2011, it’s unclear whether Panasonic will be the initial supplier or not. The car maker hasn’t disclosed the source of the lithium ion batteries used in its Roadster, except to say that the supplier was also Japanese and that they were adapted from computer batteries too. Maybe this source will also provide a stop-gap supply of batteries until the Panasonic packs are available. It’s all speculation at this point, and Tesla has provided no comment.

The Model S will minimally require battery packs of 5,500 lithium-ion cells, capable of carrying the car 160 miles per charge, at least. Tesla says 8,000-cell upgrades will also be available to push this range to 230 or 300 miles.

When it comes to the EV business, Panasonic faces competition from other major electronics corporations like Sony, Samsung, LG and BYD, and newer entries like Johnson Controls and recently-public A123Systems. Considering this field, Tesla’s blessing could be a big win for Panasonic. It could also give Tesla an advantage, as Panasonic has said its existing battery assembly lines will allow it to churn out automotive products faster and cheaper than others.

VentureBeat is hosting GreenBeat, the seminal executive conference on the Smart Grid, on Nov. 18-19, featuring keynotes from Nobel Prize winner Al Gore and Kleiner Perkins’ John Doerr. Get your early-bird tickets for $495 before Oct. 10 at GreenBeat2009.com.