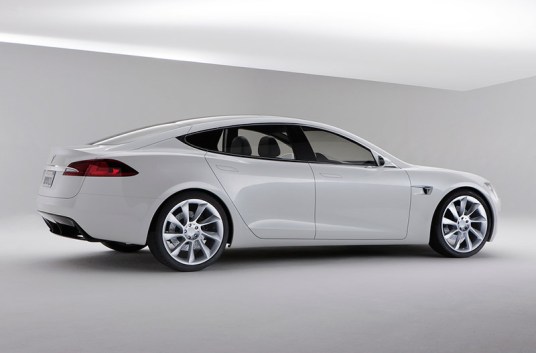 Tesla Motors, still one of the major players in the electric vehicle game despite recent financial woes, has finally unveiled its hotly anticipated Model S sedan, slated to go on sale in late 2011. With a price tag of $50,000, the car is certainly more practical for prospective buyers than Tesla’s first submission — its $109,000 roadster (beautiful, but unrealistic in today’s economy). The San Carlos, Calif. company has clearly pinned its hopes on this new car to stabilize its finances and catapult it over its growing competition.

With Fisker Automotive countering it in the electric luxury car market (and just sealing a deal to sell cars on Tesla’s turf in Sunnyvale), and General Motors, Toyota, Nissan and other industry big boys planning to roll out everyday driving machines of their own, Tesla is finding itself surrounded on all sides after once leading the pack. In the next couple of years, the landscape will probably change radically, with all of these companies’ success depending on the development of electric car infrastructure, gas prices and the state of the economy.

The more recent news on this topic is that Digg founder Kevin Rose has leaked several photos of the Model S before its official debut in Los Angeles.