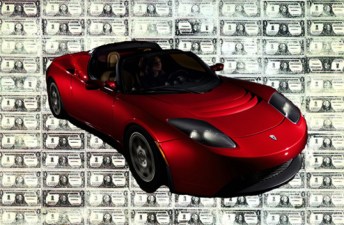 Tesla Motors, one of the most-watched cleantech IPO candidates this year  since it filed at the end of January, has made its date with destiny: June 29. And it’s raised its sights on how much it hopes to raise from public investors, from $100 million to $178 million — or 11.1 million shares sold for between $14 and $16 apiece.

Planning to trade on the Nasdaq as TSLA, the company is representative of the handful of green companies that have made it to market without ever turning a profit. This hasn’t dampened the confidence of CEO Elon Musk, who told VentureBeat last month that the sale would be much higher than the $100 million mark.

Nor has the company’s bravado been shaken by a number of other hurdles along the way, including the revelation that Musk is personally out of cash (and thus unable to invest more in the company, as he has done since its inception), skepticism of the company’s ability to stay afloat until the Model S sedan release in 2012, and, most recently, Toyota confirming that it hasn’t actually agreed to build a new electric car with Tesla, despite much fanfare at a joint press event. You have to hand it to a company that can weather all this and still seem sexy to both consumers and investors.

But will Tesla’s winning attitude — the same one that made its purchase of Fremont, Calif.’s NUMMI automotive plant appear downright heroic — be enough to carry off a lucrative IPO?

On top of the odds already stacked against a blockbuster sale, cleantech IPOs have been lackluster lately. Both biofuel maker Codexis and solar firm Jinko Solar went public at the lower end of their estimated stock price ranges. Tesla could fall prey to the same trend — though it should be buoyed by the $50 million that Toyota has officially pledged to invest upon the IPO.

Regardless, Musk will end up with at least 28.8 percent of the company’s shares following a market debut, if the company does pull off its IPO. There’s no telling what the stock price will do after that, though several analysts have told VentureBeat since that they foresee a steep decline in the price with no new product forthcoming in the next two years.

Something similar happened to advanced battery maker A123Systems when it went public last September. A123’s offering was the first cleantech IPO of 2009. Its stock price shot up 50 percent on its first day, only to slowly and disappointingly decline over subsequent months, chilling investor enthusiasm for other green companies following in its footsteps.

Like A123, Tesla has never broken out of the red. The electric car company reported losses of $25.5 million for the first quarter of 2010, much higher than the $16 million it lost during the first quarter last year. And it has steadily burnt cash—first its investors’ money, and more recently the first tranches of a $465 million loan from the United States Department of Energy, which is being slowly disbursed as Tesla builds a powertrain facility in Palo Alto and makes progress towards the Model S coming to market.

Tesla is backed by an eclectic array of investors who stand to profit—or at least get some liquidity—on June 29, including Google, its founders Sergey Brin and Larry Page, Draper Fisher Jurvetson, VantagePoint Venture Partners, the Westly Group, Daimler, Fjord Ventures, Aabar Investors, JP Morgan, Technology Venture Partners — the list goes on. Perhaps the most notable investor, however, is Musk himself, who, as we all know, could use the money right about now.