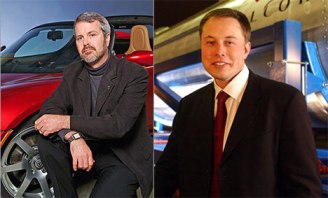 Only three months after filing suit against Tesla Motors and its chief executive, Elon Musk (right), the company’s own founder, Martin Eberhard (left), has given up the fight. Tesla announced today that the dispute has been resolved — without saying much else. It’s unclear whether a settlement was reached or if the suit was dropped, but this post will be updated as details emerge.

Eberhard had accused the company — and especially Musk — of slander, mismanagement, and delivery of a damaged roadster. Apparently, when he departed the company in 2007 — reported by many to have been pushed out by Musk — he was promised one of the first editions of the company’s $109,000 roadster. He then claimed that the model he received was dented. Shortly after that, he says Musk went to the media with stories that Eberhard was to blame for the company’s financial hardships in the fall of 2008, and its chronic product delays. For both of these offenses, Eberhard was seeking costs and damages.

Statements released by Tesla today sound a world away from this hostility. Both men now claim to be on the same page, wanting the best for the company and its products as the electrical vehicle industry turns its eyes to what appears to be the leading startup in the space.

“We can now focus on the important issue: making electric vehicles successful, something we are both passionate about,” Eberhard said in a statement passed along by the company. Musk followed up with, “Industry-changing efforts are virtually impossible. Without Martin’s indispensable efforts, Tesla Motors would not be here today.”

All of this sounds incredibly peachy for executives who have been publicly duking it out for more than two years. It will be interesting to see what the terms of the final agreement were.

Tesla has been ruling its little corner of the automotive space with an iron fist, recently, scoring $465 million in government funding, opening up swanky showrooms worldwide, and soon announcing the California locale of the new assembly plant for its Model S sedan.