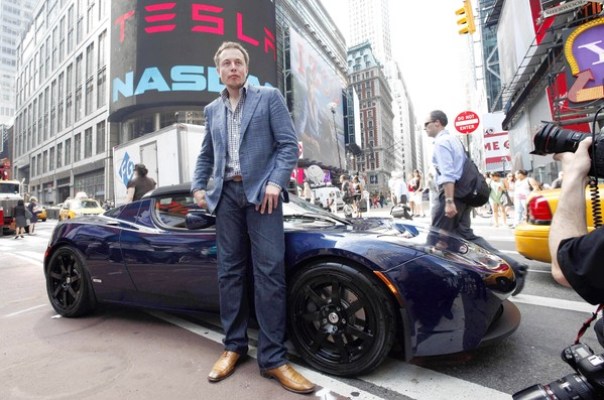 Tesla Motors‘ IPO trumped even the most bullish of expectations today, selling 13.3 million shares for $226.1 million and earning a valuation above $2.2 billion.

Initially priced at $17 last night, the company’s shares started trading this morning at $19, and hit $23.89 by the time the market closed — an impressive 40.5 percent increase. It’s since increased to $24 during after-hours trading.

This is a huge victory for the company, its CEO Elon Musk (who celebrated by ringing the Nasdaq’s opening bell and posing with a Tesla Roadster in Times Square), and its flock of investors. Here’s a quick look at who got what in the sale (according to S-1 figures):

Other major stakeholders absent from this list, like Daimler, Aabar Investments, Valor Equity Partners, Draper Fisher Jurvetson, Sergey Brin and Larry Page didn’t put any of their shares up for offer in the IPO.

The question cleantech observers are asking now is whether Tesla’s success will make the public markets friendlier to green companies in general. But most industry analysts say no.

Basically, Tesla is an aberration. After all, the company’s stock spiked on the same day that both the Nasdaq and S&P bottomed out at their lowest levels all year. This is practically unheard of.

Tesla’s products (both the Roadster and forthcoming Model S sedan), unlike those made by other green technology companies, are consumer-facing, extremely sexy and tangible. They appeal to an established love of cars, and inspire people to look to a brighter future. This image and its dutiful marketing are mostly responsible for Tesla’s explosive debut.

The public simply doesn’t feel the same way about solar panels, smart grid technologies or biofuels. They seem too removed from everyday life. This is one of the chief reasons that cylindrical solar cell maker Solyndra’s IPO couldn’t make it to market: it didn’t have the investor interest it needed to survive such a dim market.

“We have a fascination with vehicles in this country, which I’m sure aided in the company’s success in the IPO,” says Nat Goldhaber, managing partner at Claremont Creek Ventures, which specializes in smaller IT startups in the green sector. “When you look at Solyndra you can see why they did what they did because the market was sour. But you couldn’t have had a more sour day than today, and Tesla still did well.”

So Tesla’s hot debut probably won’t thaw the IPO market for most other green plays. However, there are still some lessons here about how other cleantech companies should position themselves, Goldhaber says. For example, Tesla was wise to team up with Daimler and Toyota.

“I think Tesla’s success or lack of success will rest on its ability to continue to provide power packs or the intellectual property for the construction of power packs for electric vehicles built by other companies,” he says. “I think it’s much more important that it has deals with Daimler and Toyota than its development of the Model S. If they have stable, defensible IP in this area, I think they could have a sustainable advantage in the industry.”

Goldhaber identifies Silver Spring Networks, a venture-backed company that provides wireless communications for smart grid applications, as a cleantech contender that could follow in Tesla’s footsteps. With valuable IP and partnerships with General Electric, EnerNOC, Cisco Systems and Itron, in its arsenal, it has everything it needs (except perhaps the sex appeal) to see a lucrative IPO this year or next.

[Image via The Los Angeles Times]