CEOs are Silicon Valley’s version of celebrities. We watch their every move and soak up their every word, hoping for pearls of wisdom that will lead to glory and riches.

News aggregator News360 took a look at which of these illustrious personas attracted the most media coverage this year. The company analyzed more than 400,000 news sources between January 1 and November 30 of 2013, indexing stories where the CEO’s name made the headline.

Topping the list is Apple CEO Tim Cook, whose 3,555 headlines comprised nearly one-third of all the media attention devoted to the top five CEOs combined.

Apple news is always big news, and this year Apple’s usually reticent leader was the center of controversy and debate. Apple’s board expressed concern about the company’s “lack of innovation” as well as its slumping stock and the decreasing market share for iPhones and tablets. Cook was also involved in discussions surrounding hot button issues such as the Employment Nondiscrimination Act and NSA surveillance. 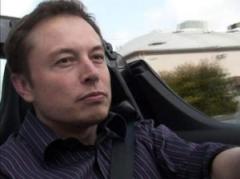 Tech luminary Elon Musk, of course, made the top five, appearing in headlines for his assortment of big-vision and world-changing projects — SpaceX, Tesla, the Hyperloop, and SolarCity.

Each of these companies generated attention-grabbing news stories. Tesla had to put out various fires (literally and figuratively speaking), commercial space travel really took off in 2013 with SpaceX leading the way, and Musk’s Hyperloop super train is an insane and expensive pipe dream that may just come true.

Facebook CEO Mark Zuckerberg ranked third for media attention this year, with 2,239 headlines. Many of these related to Facebook, which saw its stock steadily climb and grew its per user revenue in nearly every single category.

He also created buzz for his extracurricular activities with immigration reform and FWD.us, Internet.org, and all the NSA drama.

Zuck was also ranked top CEO of 2013 in a Glassdoor survey and made the world’s richest billionaires list.

Yahoo CEO Marissa Mayer is predictably in the top five and predictably the only woman there. She generating 2,029 headlines. 2013 was Mayer’s first full year as the CEO of Yahoo, and she was covered by media everywhere, ranging from tech blogs to Vogue.

Mayer went on an aggressive acquisition spree this year, making high-profile purchases (like Tumblr) and a number of acqui-hires.

Mayer’s role as an executive-woman-mother also garnered media attention. She attracted praise, vitriol, and inevitably, controversy for some of her leadership decisions, most notably the work-from-home ban.

Fifth on the list is Amazon CEO Jeff Bezos. Bezos made a big splash with his unexpected purchase of the Washington Post, his teaser of delivery drones, and various other new products and services aimed at total retail domination.

Whatever he’s doing is working — Amazon’s stock steadily climbed this year, passing $400 for the first time ever today and marking a 60 percent growth in 2013 alone.