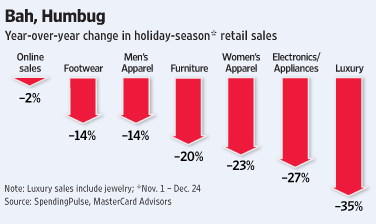 Online retailer Amazon is hawking its holiday sales traffic today, claiming a single-day company record of 6.3 million items ordered on December 15. But the report lacks hard numbers, and another new report points to hard times for all retailers  — including those online. Amazon is benefiting from more people shopping online than ever before, but at a time when most have less money to spend.

Overall U.S. retail sales fell 2.5 percent in November and 4 percent in December versus the previous year, excluding automobile and gas purchases, according to data released yesterday by SpendingPulse, a spending-analysis arm of credit card giant Mastercard. Among the worst-hit sectors were consumer electronics and appliances, which declined 26.7 percent this year versus a 2.7 percent gain last year. E-commerce only fell two percent, but that number looks bad against the sector’s 22.4 percent gain the previous year.

Holiday retail numbers have been distorted. Bad weather kept many shoppers home doing their shopping online — better weather might bring people back to stores in greater numbers, next year. Amazon’s own downer: This year’s peak sales day was only 17 percent above its peak day last year, when the company received 5.4 million orders on December 10. Last year saw Amazon beat its 2006 single-day sales record by 35 percent. This holiday season had five fewer calendar days than last year, and changes to Amazon’s ordering policies may have also affected its single-day gains this year. 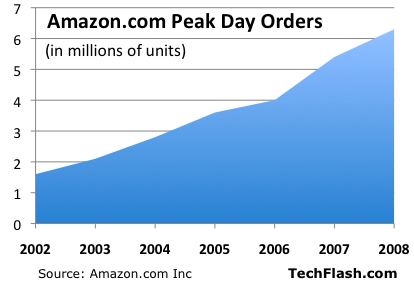 So, maybe Amazon will post some big numbers this quarter? Rival eBay saw a 16 percent drop in sales this past shopping season, due in part to internal product changes. EBay’s pain could be making the e-commerce sector look worse than it actually is. After all, would Amazon have risked trumpeting a positive story about holiday sales today if it has bad news to share in the near future?

The longer-term problem, of course, is that the U.S. economy is entering its second year of a recession — a recession of indeterminate length. A decades-long equity bubble has burst, credit has dried up, and so have job opportunities. Amazon may be gaining retail market share, but that market is still shrinking.