The app economy consists of everybody who makes money and has a job thanks to mobile apps. By 2020, the app economy could double in size to $101 billion, according to market researcher App Annie.

The growth will be driven by increasing usage of apps and by greater smartphone adoption around the globe. The report from App Annie is aimed at giving brands, agencies, investors, and app developers predictive insights into global opportunities for the next five years. One interesting fact: Games generated 85 percent of the app market revenue in 2015, or $34.8 billion globally. That is expected to grow to $41.5 billion in 2016 and $74.6 billion in 2020.

But other categories will grow even faster than games. In contrast to a few years back, when games or media companies dominated apps, app publishers now come from every industry. They hail from banking, retail, airlines, ridesharing services, and government agencies. Supported by venture capital and hedge funds, the app industry is generating a lot of market value and actual revenue. 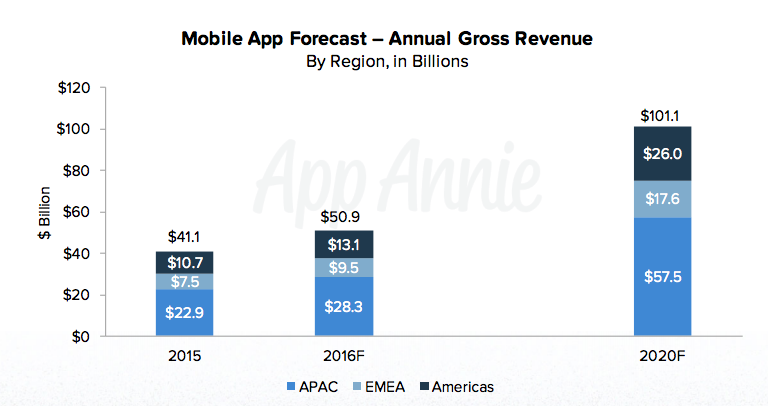 Above: Mobile app forecast by region.

Danielle Levitas, senior vice president of research at App Annie, said in a statement that the report leveraged more than 10,000 sources to uncover a variety of insights. (App Annie tracks more than a million apps.) In 2016, the global mobile app market is projected to expand 24 percent to reach $51 billion in gross revenue (the amount consumers spend on mobile apps via stores) across all app stores. By 2020, gross revenue across all app stores will exceed $101 billion, globally.

While large markets, including the United States, Japan, and China, remain central to overall app revenue growth, App Annie sees tremendous opportunity in fast-growing markets such as India, Indonesia, Mexico, and Argentina. China is expected to surpass the U.S. in total revenue from app stores by the first half of 2016. It passed the U.S. in downloads in early 2015.

App revenue and usage isn’t necessarily being affected by regional recessions, with very strong growth seen in countries like Argentina and Brazil in 2015. Brazil will grow app revenue 40 percent this year, despite an economic slowdown. This is reminiscent of the strength of the smartphone and app market during the 2008–2010 period in mature markets like the U.S., App Annie said.

Globally, total time spent in apps grew by 63 percent on Android phones from 2014 to 2015. App usage will get a boost on newer platforms such as  wearables, TVs, virtual and augmented reality (VR and AR),  home Internet of Things (IoT), and automotive. 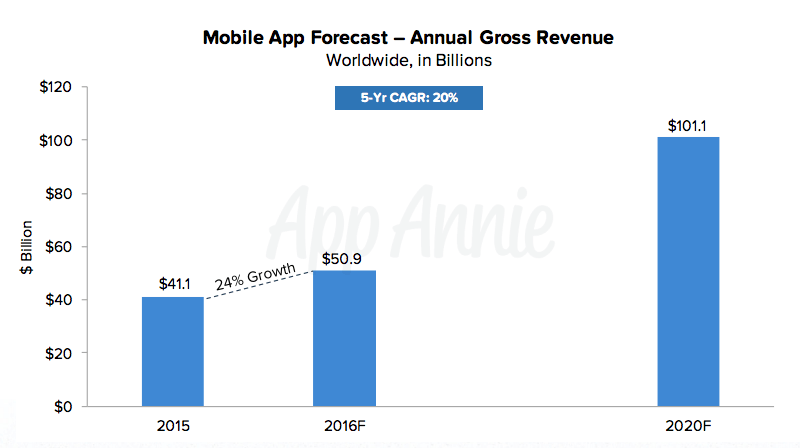 Above: Overall growth for the app economy.