Keewifi, a plug-and-play device, is small and uses the 802.11ac wireless networking standard along with proximity technology to authenticate mobile devices as an alternative to standard Wi-Fi passwords. Keewifi stresses on its Kickstarter campaign page that by tapping one’s mobile device on the router one can set up a connection in only 30 seconds. But the company’s video on the site shows that when a mobile device is even held closely to the Keewifi, connection is achieved and a circular blue light glows on top of the router. The device needs to be held within just 2 inches of the syncing panel. The new router’s simplicity has been appealing to many backers; Keewifi has already doubled its campaign goal. This product stands to make it a hit, but only if Keewifi manages to get decent distribution. 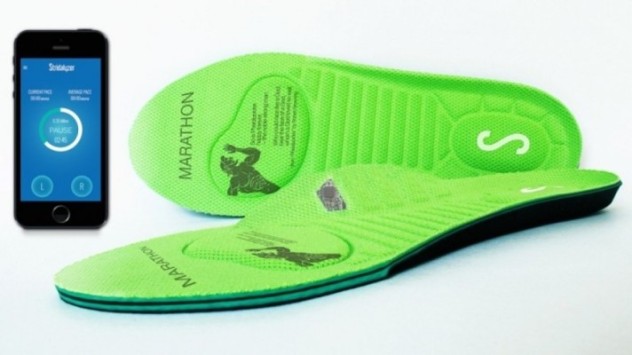 Stridalyzer analyzes any runner’s stride and gait and can predict if that person is headed for an injury. The insoles have integrated multiple sensors that detect how the user’s foot lands, rolls and pushes off the ground. All the user has to do is put the insoles in their running shoes, turn on the accompanying iOS app, and start running. Stridalyzer automatically understands the user is moving and will start collecting data about the run from each of the two included insoles. The insoles come with a USB charging cord and each insole battery charges in about 15 minutes. Backers are excited to prevent knee injury with this product and have helped push the Kickstarter campaign past its $25,000 goal. Stridalyzer has competition, but none as affordable or well-designed.

The Uno Noteband — no relation to the restaurant chain or the card game — features fitness tracking technology like several other wearable bracelets on the market. But what separates the Uno Noteband from the crowded field of competing devices is its use of a new technology called Spritz.

Spritz is a reading compression technology that enables one-touch reading of notifications on the device’s OLED display. Reading via the Noteband can be done up to 80 percent faster than on typical mobile devices because it eliminates the scrolling function that typically requires two hands. As a result, the user can get through a long email message after just one click. Uno vibrates when it receives an alert and the user just has to touch the Noteband to display the message. The device, compatible with the Android and iOS operating systems, also features an accelerometer that enables fitness goals and syncs with the Apple Health and Google Fit platforms. Backers have helped this product raise 203 percent of its original goal on Indiegogo and counting.