Startups Uber, Lyft, and Sidecar get all of the attention when we discuss alternative transportation options in San Francisco. But one of my favorites is BMW’s little talked about DriveNow.

(Disclosure: BMW comped my usage for one month so I could adequately test the service; I pay for ongoing usage personally.)

DriveNow offers one-way car sharing to designated locations around the Bay Area. This includes multiple locations in San Francisco, SFO and OAK airports, Mountain View, Palo Alto, Oakland, and some locations on Google campuses. You use an app to find a nearby vehicle, unlock the car with a personal access card, and leave the car when you’re done. The company charges $12.00 for the first 30 minutes and then 32 cents a minute for drive time. Parking time is 13 cents per minute if you aren’t at a DriveNow facility. A daily maximum applies, currently $60.

My primary rental is from my apartment in downtown San Francisco to SFO. That ride usually falls under the 30-minute minimum or about $13.00, including tax. That’s barely more expensive than BART and a heck of a lot more convenient.

The cars are nicer than the typical rental car: They are BMWs with leather seats, SiriusXM, and navigation systems. They’re also all electric, which means you can use the HOV lanes in the Bay Area even when driving alone. The range is roughly 80 miles; I was able to get from San Francisco to Mountain View and back. I wouldn’t want to push it any farther than that.

According to CEO Rich Steinberg, there are currently 70 vehicles in the San Francisco market. Although the service was off to a slow start, usage has now picked up, and the company is considering doubling its fleet.

Like Daimler’s car2go product, which I wrote about before, some of the expansion Steinberg would like to see has been blocked by the intransigence of the SFMTA. I asked why there were no DriveNow locations in the Mission or on the west side of the city. Steinberg said he’d love to have them out there, but he can’t find suitable parking spaces. The demand is there, but he can’t fill it. 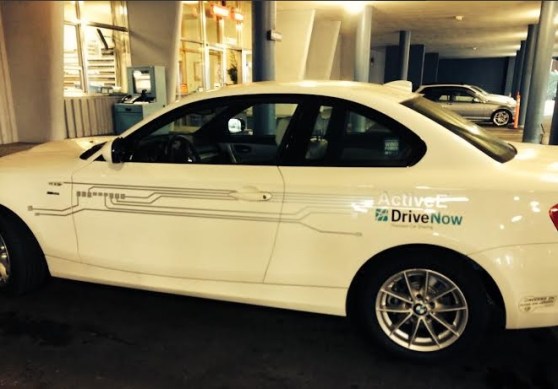 Above: A DriveNow car at the San Francisco facility.

In other markets in which DriveNow operates (all in Europe; San Francisco is the first U.S. deployment), cars can be parked almost anywhere in the city; there are no designated stations. But Steinberg couldn’t get the SFMTA to cooperate with such an approach.

I asked David Chiu, my San Francisco supervisor and the president of the San Francisco Board of Supervisors, why this is the case.

“I’ve championed city car-sharing with past legislation and have also advocated for one-way car sharing, as I’ve learned about issues from some of the new providers,” Chiu responded. “I understand the SFMTA has been a bit slower on this new innovation than we’d all like.”

People in the industry have told me that the SFMTA has basically said “prove that it works” before it will allow such systems to operate. But they can’t prove that it works in SF if the SFMTA doesn’t cooperate; apparently the success of DriveNow in Europe and of car2go in Seattle, Vancouver, Austin, DC, Denver, and San Diego isn’t enough for SFMTA.

As with housing, we have San Francisco’s bureaucracy standing in the way of a meaningful solution. In this case, it would reduce people’s reliance on private vehicle ownership, ease parking problems, and reduce traffic congestion. But San Francisco chooses to remain behind cities like Munich and Berlin.

If San Francisco were more flexible, I could pick up a car near my house, drive it to Ocean Beach, and leave it. Eight hours later, when I’m ready to come home, I’d pick up another car. In that eight hours, instead of the car sitting idle consuming a parking space, someone else could use it.

In downtown San Francisco, where the cost of monthly parking can easily exceed a car payment, this can make a lot of economic sense. Although it doesn’t work for people who commute every day, for someone who needs to use a car only occasionally, it is cost effective.

The system itself has a network effect; the more DriveNow vehicles are on the road, the more people will be comfortable releasing a vehicle while they’re running errands. That’s a big societal value.

My DriveNow experience wasn’t entirely flawless. The biggest issues I ran into were the company’s reliance on private parking garages in downtown SF. Because of tight parking availability, many of these garages stack vehicles tightly and you need to wait for a valet. Sometimes, the wait was up to 10 minutes. One garage refused to let me park because it already had two DriveNow vehicles parked. (Steinberg said this shouldn’t be my problem; they’re supposed to call DriveNow’s fleet team to handle the excess.) That’s even more annoying when you’re paying 32 cents a minute. Some of this is growing pains that will get worked out.

Although you could consider DriveNow to be competition for Uber, Lyft, and Sidecar, I consider all of these complementary services. They jointly compete against the biggest competitor: individual car ownership. Having a variety of alternatives at your fingertips lets people trust that they won’t get stranded. If I get out to Ocean Beach and I can’t find another car around when I’m ready to come back, I can always try Lyft or Flywheel. That makes it easier to give up a car. It can also be more environmentally efficient than taxis and ride services. I drive a BMW DriveNow to the airport; someone else drives it back to the city. It has the potential to eliminate deadhead trips. (During periods of imbalanced demand, DriveNow currently has drivers who reposition vehicles. But it’s conceivable that DriveNow could lower pricing for trips to certain destinations to encourage people to move the cars.)

I asked Steinberg if BMW was worried that providing an option like DriveNow might hurt future BMW vehicle sales. His response was enlightening: BMW considers itself a mobility services provider, not a car manufacturer. (BMW also offers a ParkNow app, helping drivers find and pay for parking.) And if DriveNow customers have a great experience, when they have a family and move to Marin, maybe they’ll be more inclined to buy Basic Marin Wheels.

This sort of approach could also be great for a company like Tesla. Instead of having to fight periodic media horror stories based on anecdotes, Tesla could take a week’s worth of production and enable ordinary people to experience clean, comfortable driving. It could also get people over range anxiety. I couldn’t take a DriveNow car to Napa for the weekend, but I could easily take a Tesla. People become most comfortable with what they experience. It could even be set up as a contest like Google Fiber: Cities could compete to be the Tesla car-sharing city.

I would love to see Tesla do that in San Francisco. Until that happens, I’ll keep using DriveNow. My next trip is a one-way rental to Oakland Airport on Thursday.

Special for VentureBeat readers: Use promo code VBDN50 and get half off the $38.00 lifetime registration fee. It’s $19.00, good until March.