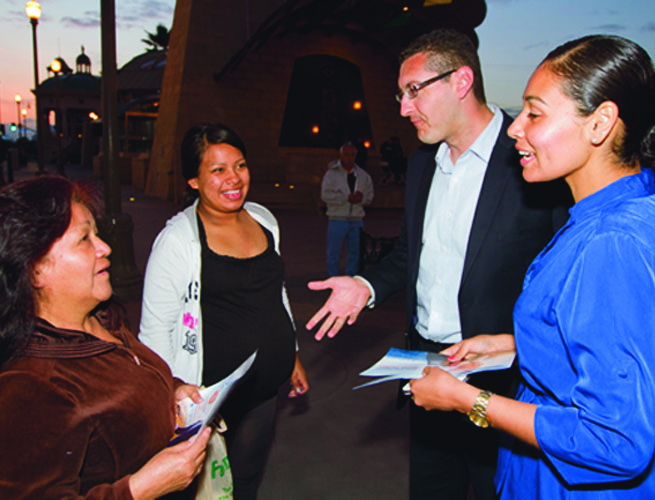 Technology plays a strong role in Pleitez’s vision for education reform in the city. Pleitez, a Stanford graduate molded by the rough and gang-ravaged public school system of East L.A., wants to address the city’s disappointing high school graduation numbers, specifically that only 50 percent of students finish high school in four years.

The candidate believes a greater emphasis on digital literacy, and incorporating more tech-focused courses in school curriculums might help steer struggling students towards better academic performance. “The foundation of a sound economy is a skilled workforce,” he noted.

But can you teach gangbangers to code?

“It’s cheaper than incarcerating them.”

We asked Pleitez for specific numbers, and he referenced a statistic from the documentary about the state of the U.S. educational system, “Waiting for Superman,” that concludes a year of educating a student in a private school costs less money than a year of educating an inmate in prison.

Another facet of Pleitez’s tech- education plan is his desire to convert the city’s official website, lacity.org, into a brand-name learning portal that offers visitors free or low-cost applications that teach digital skills. Pleitez thinks L.A. can become a leader in nationwide digital education and even raise revenue by charging non-California residents to enroll in the city’s online tech applications.

The candidate claims the city’s website’s draws 500,000 to a million unique visitors a month and says this proves lacity.org’s potential to be a vital educational resource and city-revenue driver.

I asked Pleitez about his thoughts on the locally hyped Silicon Beach movement, concentrated in L.A.’s more affluent Westside nodes. Pleitez praised the rise of startup activity and technology investment on the beach but said, “It shouldn’t be concentrated in one or two places.  We need to make sure we are providing these hubs across the city, but especially in the most underserved communities.”

He said investors do not promote innovation in South L.A. communities because they fail to recognize their value propositions, ones that are significantly enhanced by the candidate’s plan to transform the area into a hub of clean energy production.

“These are emerging domestic markets,” he said.

Pleitez, who resigned from the role of chief strategy officer at the social-network aggregator Spokeo, to pursue politics, said he also strongly believes in technology’s capability to improve the political process by enabling campaigns to engage the public on many more platforms.

The broadened scope of online communication channels available today enables a political candidate’s message to be more “targeted,” said Pleitez, sounding more like a media strategist than a politician. “I took a lot of notes from the Obama campaign,” he added.

Part of Pleitez’s voter-outreach strategy involves “house meetings,” where the candidate invites the public to hear him discuss issues at a private residence. Pleitez says these functions have attracted a total of 40 to 50 people, who learned about the event through Facebook advertising alone.

We asked Pleitez if his campaign’s data strategy was truly innovative and if it signified a real disruption of politics in L.A..

Pleitez cited the team of in-house data scientists that compile and organize his voter base’s raw analytics. An in-house team eliminates the need for data-vendor middlemen, and saves the campaign $40,000 to $80,000, he estimates.

“We did it ourselves, so were able to overlay data,” he said. That, in turn, enables his data scientists to perform more specific analytics queries in real time, resulting in better microtargeting initiatives. Pleitez highlighted his team’s ability to create subsidiary campaigns tailored to the voter sentiments of specific neighborhoods as one example of his micro-targeting advantage.

“I am more tech-savvy and innovative than the other candidates, period,” he said.

But that might not be enough to win him the mayorship. The L.A. Times notes that he’s still fifth in the polls and that he’s raised significantly less funding than the leading candidates.