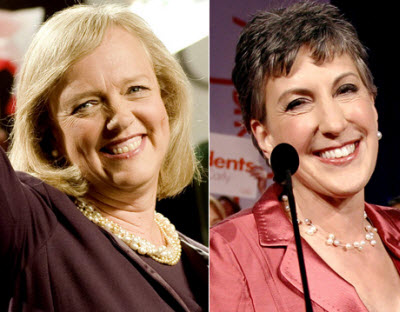 Perhaps tonight’s elections in California should be a lesson for technology executives at big tech companies. The pedigree of being an executive at a major tech company isn’t necessarily a winning background for California politics.

Both Carly Fiorina and Meg Whitman are projected to lose their races tonight, according to all major news organizations. Barbara Boxer has held off former Hewlett-Packard chief executive Carly Fiorina in the race for the U.S. Senate, while former eBay CEO Meg Whitman is currently losing to Jerry Brown in the race for governor of the golden state. Both women spent huge amounts of their own personal fortunes on the race.

Both Whitman and Fiorina evidently had weak campaigns, since Republicans are having a field day elsewhere in the country. They campaigned on the promise of bringing jobs back to a state that has more than 12 percent unemployment. But their opponents managed to paint them both as representing the rich and not being in touch with the electorate.

Whitman, a Republican billionaire, spent more than $140 million on her campaign, yet she was beaten by Democrat Brown, who last served as governor in 1983. Whitman’s campaign lost its momentum when it was revealed that, despite her hard stand on illegal immigration, her housekeeper, Nicky Diaz Santillan, was an illegal alien. Whitman fired the housekeeper once her illegal status was revealed, and Diaz Santillan alleged at a news conference that Whitman made her feel like “a piece of garbage”.  The episode, which has been dubbed “Nickygate,” likely alienated the Latino community in California, undoing the tens of millions that Whitman spent on Spanish-language political ads.

Republican Fiorina went down in part because Boxer was able to make Fiorina’s tenure at HP a big issue. Boxer accused Fiorina of eliminating and outsourcing thousands of jobs in the wake of the controversial HP merger with Compaq. Fiorina was also hospitalized last week with an infection associated with her bout with breast cancer.

With these losses, Silicon Valley’s influence in California politics isn’t going to be very strong, unless you count San Francisco Mayor Gavin Newsom’s likely election as Lt. Gov. Newsom isn’t a Silicon Valley business man, but he is a Silicon Valley politician who can carry the tech community’s concerns to the highest levels in the state. Meanwhile, a Barron’s headline quips, “Anyone need a CEO?”

In another big vote related to Silicon Valley’s cleantech industry, Proposition 23 was handily defeated. The measure would have delayed implementation of AB 32, a state law aimed at attacking global warming.

In her concession speech, Whitman said, “It’s time for California to unite behind the common cause of turning around this state we love…. This election was much bigger than Gov. Brown or me. Our challenges are daunting and they wont be solved by politics as usual.  Tomorrow we are all Californians.” Boxer said in her victory speech that the election was about who would reward companies for creating jobs in the state, not give tax breaks for those who send jobs overseas. She thanked four former HP employees who spoke out against Fiorina in Boxer’s TV commercials.