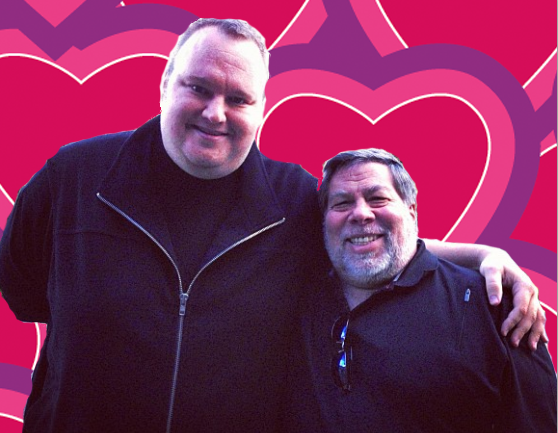 The blooming bromance between hirsute Apple co-founder Steve Wozniak and Kiwi bad boy Kim Dotcom is getting more serious by the day.

Dotcom, for those of you unfamiliar, is the founder of the now-shuttered Hong Kong-based  file-hosting service Megaupload, which the US Department of Justice shut down in January. The self-proclaimed victim of that high-profile police raid and seizure, which also landed him a month in jail, is facing not only extradition to the US but charges of money laundering and racketeering as well.

Wozniak isn’t fond of the situation. “It’s just kind of ridiculous what they did to his life,” he told the Associated Press.

For Woz, the case against Dotcom and Megaupload is a weak one. After all, plenty of people used the service entirely legally before it was shut down, he points out.

As a founder of the Electronic Frontier Foundation, Wozniak says he’s intent on helping Megaupload’s users get their legitimate and legal files back from the US government, which aims to destroy the data.

“You don’t just shut down the whole street because somebody is speeding,” he told the AP.

Fortunately, Woz also recognizes the very real possibility that Dotcom, for all his smooth talk and charm, is pulling wool over his eyes. “If I hear details that have credibility, I could totally turn against him,” he said, noting that little of what he’s seen has given him any reason to do that.

But Wozniak isn’t the only one who’s joined the Cult of Kim. Days after starting a personal Twitter account, Dotcom has accrued over 40,000 followers. Clearly, the man is an empathetic character to a lot of people.