Leaks about the specs of the new iPhone 6s have been emerging for weeks, and it’s looking like the new device will be a solid upgrade to the current iPhone 6. But it may show up too soon.

The new phone will likely be announced this September. Reports earlier this month said that production of the iPhone 6s component parts is already well under way, and that Foxconn, which assembles the iPhone, is already taking delivery of the parts. Our sources say that parts production and assembly will ramp up sharply in August ahead of a fall launch.

If the leaks are to be believed, the iPhone 6s will look like a slightly thicker iPhone 6. It will feature more memory, better back and front cameras, and a more efficient antenna. We’re likely to see some better power management and battery management technology.

The T-Mobile version of the device will support an expanded set of spectrum bands, which could improve connections significantly.

These are all upgrades to existing features. The iPhone 6s is expected to ship with just one wholly new feature: Force Touch with haptic feedback. 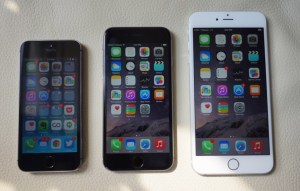 Many of the iPhone 6s’s feature upgrades are meant to bring the iPhone back into parity with premium phones from companies like Samsung, HTC, and LG. But one big one is likely to be missing, according to source with knowledge of Apple’s plans. The iPhone display has fallen well behind those on rival phones in both brightness and image sharpness, but the iPhone 6s isn’t likely to see a great leap forward in display quality.

Still, why should Apple be in a big hurry to push a new and improved iPhone 6s out to the market when the current iPhone 6 and iPhone 6 Plus models are still out there killing it sales-wise? In fact rumors have circulated in the mobile industry that Apple may delay the iPhone 6s on-sale date to allow the strong iPhone 6 sales to continue.

Apple will announce its fiscal third quarter 2015 earnings on July 21. Deutsche Bank analyst Sherri Scribner said in a research note that Apple will report sales of around 50 million iPhone 6 devices in the April through June quarter. That would represent an 18 percent decline from the previous quarter, but that is consistent with normal seasonal sales patterns.

But Scribner is concerned that the overall cell phone market is slowing down and that iPhone sales are slowing down even faster.

The hype about a new iPhone coming in the fall might compound that problem. Many consumers might be tempted to wait for the new iPhone 6s even if their wireless contracts expire, or their phones wear out, during the July-August-September quarter.

So it’s possible that Apple may be putting the brakes on sales of an unusually popular phone, the iPhone 6. Is it possible that the iPhone 6 is unique — that it simply doesn’t fit neatly in the “every September” product life cycle imposed by Apple on its phones?