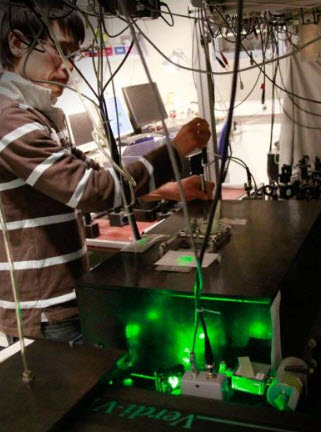 Researchers have created a way to use lasers to cool semiconductor chips.

At the Niels Bohr Institute in Copenhagen, researchers combined quantum physics and nano physics to create a new way to cool semiconductor chips, which are the brains of everything electronic. Cooling technology is increasingly important as low-power consumption has become the biggest priority in new chip design, particularly for mobile devices such as smartphones, tablets and other portable gadgets.

The researchers created semiconductor “membranes” 160 nanometers thick with a surface area of 1 millimeter by 1 millimeter, according to researcher Koji Usami, associate professor at the Niels Bohr Institute, in an interview with TG Daily. A nanometer is a billionth of a meter.

In the experiments, the membrane interacts with the laser light in a way that its mechanical movements affected the light that hit it. By getting the membrane to oscillate in a certain way, the researchers could cool it down from room temperature to minus 269 degrees Centigrade.

The lasers paradoxically work by heating the semiconductor material as a whole, but the membrane itself cools down at the certain oscillation level.

“It is cooling by warming,” Usami said.

The research has been under way for several years in the quantum optical labs of the Quantop research group at the Niels Bohr Institute. There’s no telling yet when the technology can be commercialized.