Every fall, the cost of acquiring mobile-app users rises like the wind. After a summer lull, this phenomenon happened again in September. The cost rose 34 percent from a year ago according to data collected by mobile-marketing firm Fiksu. The cost-per-loyal-user index, which measures the price of acquiring a user who opens an app at least three times, has hit an all-time high.

For small developers of games and apps, that wind is hitting like a hurricane. It drives up the costs of advertising and makes it even harder for the small folks to get noticed. Fiksu said that this year, the launch of the Apple iPhone 6 and 6 Plus, as well as the unveiling of iOS 8, has driven demand for new mobile devices and enthusiasm for apps. You can expect a lot more marketing activity and higher costs per loyal users in the coming months.

The cost-per-loyal-user index increased 21 percent to $2.25 in September, from $1.86 in August. The new high-water mark reflects the enduring trend of increasing activity and growing competition to capture the attention of customers.

While acquisition costs are rising, so is the enthusiasm for devices and apps, and that’s something developers should be excited about. In Fiksu’s usage tracker, adoption of the new iPhone 6 was 116 percent higher than that of the iPhone 5 in the first 30 days post launch. These new users are extremely valuable, and app marketers are eager to compete for their attention. New device owners add new apps like crazy.

Fiksu’s cost-per-loyal-user index shows the trend of rising costs for marketers to acquire loyal app users over a two-year period. 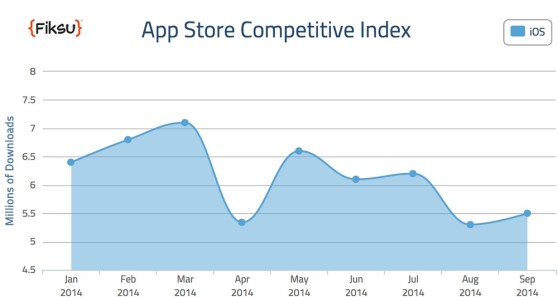 Fiksu also said its app-store competitive index increased in September with 5.5 million daily downloads, compared to August’s 5.3 million. This represents a 4-percent increase month-over-month. The competitive index measures the average aggregate daily download volume of the top 200 ranked iOS apps. It was down 4 percent from a year ago. One reason for that is the space limitations of iOS 8 often forced users to free up storage and delete apps or download fewer new apps. Apple changed its top charts from 300 apps to 150 apps as well.

The cost-per-launch (CPL) index, which tracks the costs of driving engagement from mobile users, increased on iOS in Sepbember to 29 cents, a 36-percent rise month-over-month and 48-percent increase year-over-year. 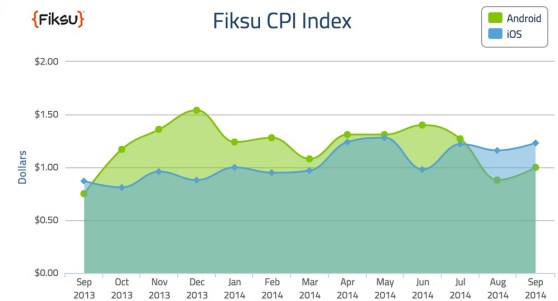 Above: Fiksu’s cost-per-install index from September 2014.

The cost-per-install (CPI) index increased 6 percent last month from August to $1.23, up 41 percent from a year ago.

“The escalating year-over-year growth of mobile devices, apps, and media costs highlights the immense opportunities and challenges facing marketers today,” said Micah Adler, CEO of Fiksu. “The launch of a new iPhone and iOS in September only sets the stage for app marketers as they head into the busy holiday season. We expect to see even more activity as a result of the new iPads and Android devices from Samsung and Google’s Nexus family in the coming months.” 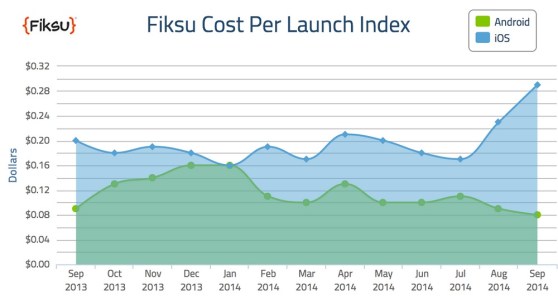 Above: Fiksu cost-per-launch index from September 2014.