Last week I went on my summer vacation for a few days. It was a rare victory for those of you who would like to see me work less and play fewer games as well. (Yes, I know you’re out there, and you’re tired of hearing me brag that I wrote 10 stories in a day.)

Now I had to do actual work at Gamelab in Barcelona, despite the loveliness of that place. And when I got back, it was time to not work. My boss told me so. I scheduled the stories for the coming week at night and took it easy during the day. I tried to play a bit of Marvel’s Spider-Man, which has been sitting on my pile of shame at 44% finished since last fall. Now I’m at 54% of the campaign completed. 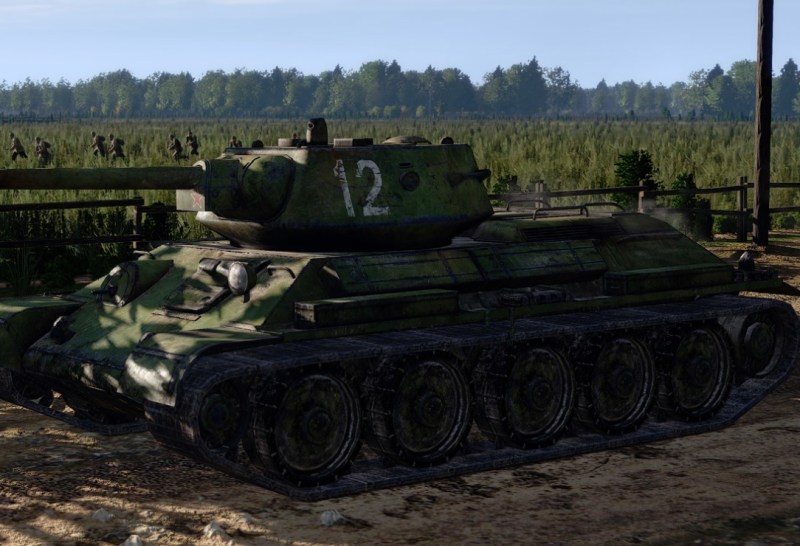 I also downloaded a few games for fun: Steel Division 2 and Hearts of Iron IV. Both of these World War II strategy games looked like something I could spend 100 hours playing. But I viewed some tutorials on YouTube, and I found the rules to be quite complicated. I figured out that, with the time I had, it would be more entertaining to watch somebody (like Northern Quarter) play these games on Twitch and YouTube. I had the same problem trying to get started with Total War: Three Kingdoms. Great game but too long for me, even during my vacation. 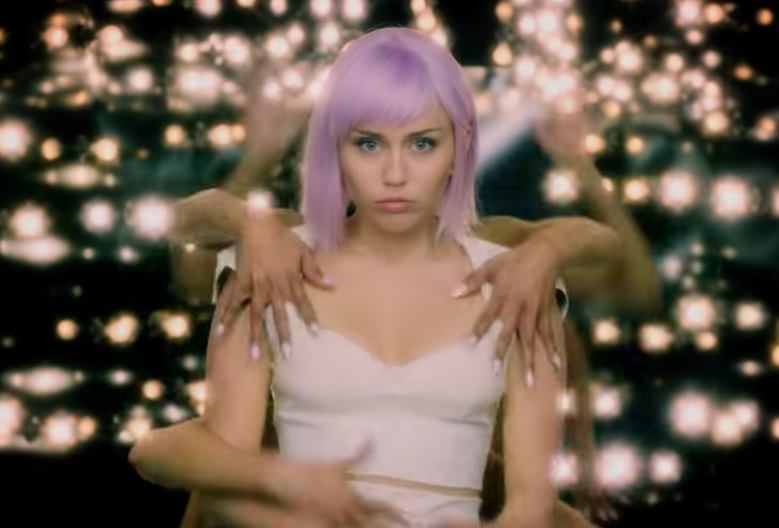 Above: Miley Cyrus on Black Mirror

Of course, my wife was smart about making sure that I didn’t work by scheduling a 3.5-day cruise on a Carnival cruise ship from Los Angeles to Ensenada, Mexico. That also kind of exploded my available game time. But I did manage to watch the wonderful Miley Cyrus episode of Black Mirror on Netflix.

Above: Harry Potter: Wizards Unite wasn’t too fun in the burbs in LA.

We caught an Earthquakes vs. LA Galaxy soccer game and a fireworks show. And then we drove down to Los Angeles. When I wasn’t driving, I was playing a little Harry Potter: Wizards Unite on my iPhone XS Max. 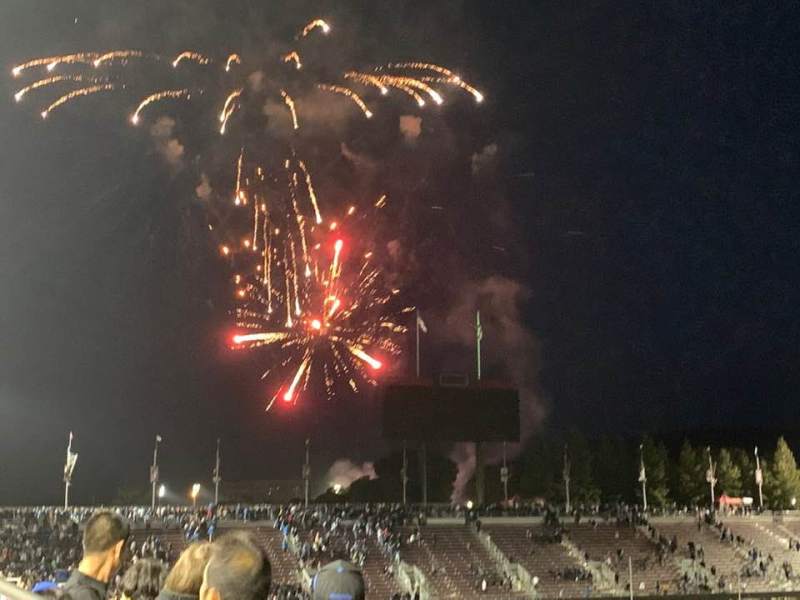 Above: Fireworks after the San Jose Earthquakes vs. LA Galaxy soccer game.

But it was tough to find anything to interact with on the barren freeway. I scheduled stories while driving and did a lot of email, mostly telling people I wasn’t going to be at work. It took a while to get out of this work habit. Once we got to Los Angeles, I went for a swim. That was nice, being unplugged. 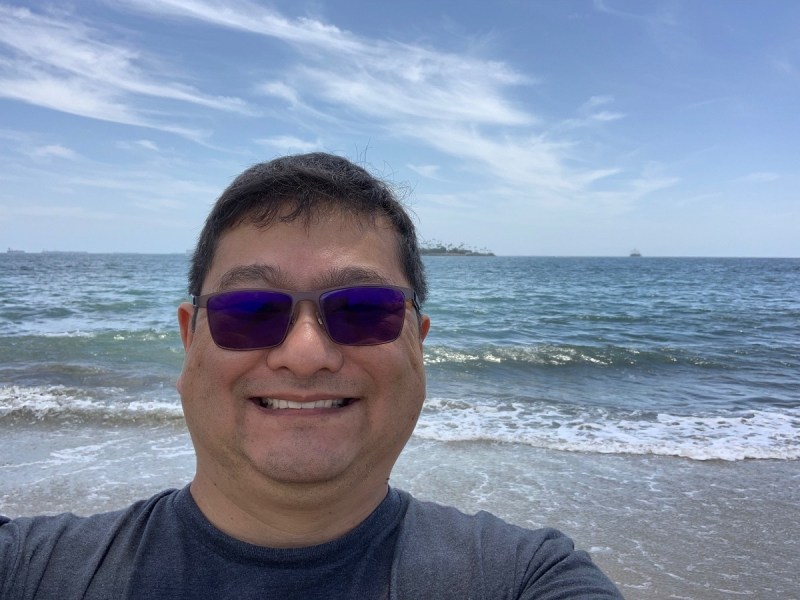 Above: Dean Takahashi in Long Beach.

We visited some relatives and then we made our way to Long Beach, which brought memories back for me and the wife, as that was where we met. We showed the kids our old stomping grounds. I walked out to the beach with my youngest and soaked my feet in the Pacific Ocean. 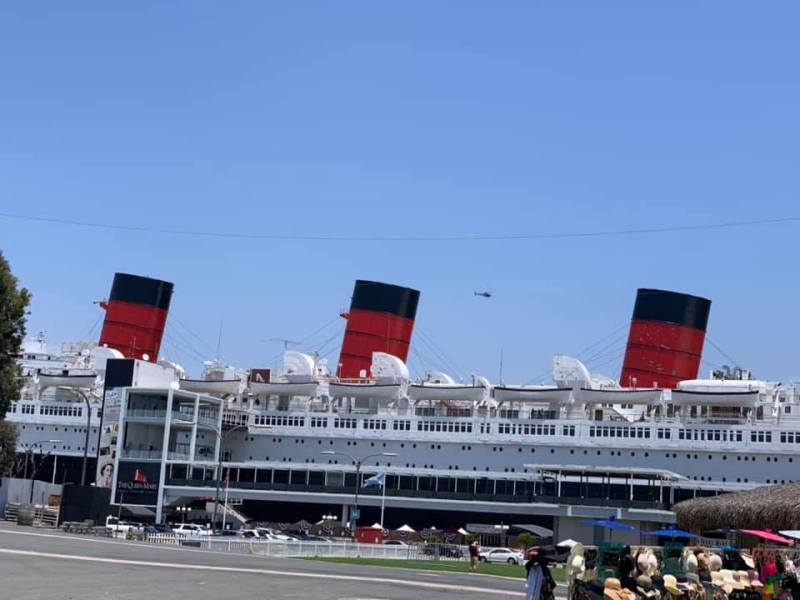 Above: I got married on the Queen Mary.

We ate at our old favorite restaurant, Cafe Piccolo, and got the same kind of dinner bread they gave us 25 years ago. We spent the night in Seal Beach, and I started reading George R.R. Martin’s A Knight of the Seven Kingdoms. The Southern California earthquake shook us up a little, and then we made our way to the port. There, we saw the Queen Mary, where we got married. 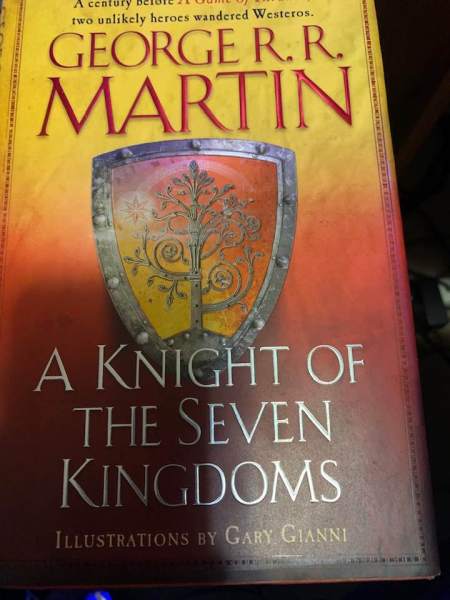 Above: A Knight of the Seven Kingdoms

And we boarded the Carnival Imagination cruise ship. I took aboard my iPhone, my Oculus Quest, and my Nintendo Switch. If I was going to play anything on board the ship, those devices were all I had. It was a cruel twist of fate that my cruise ship didn’t have all of the modern technologies that I wrote about when I briefly boarded a Carnival Royal Princess ship with the Ocean Medallion wearables. Only about three of Carnival’s 100-plus ships have been upgraded with the new technology, which comes with 100-megabit-per-second wireless. (That kind of speed could have been good enough to try something like Google Stadia for gaming on the cruise ship.) 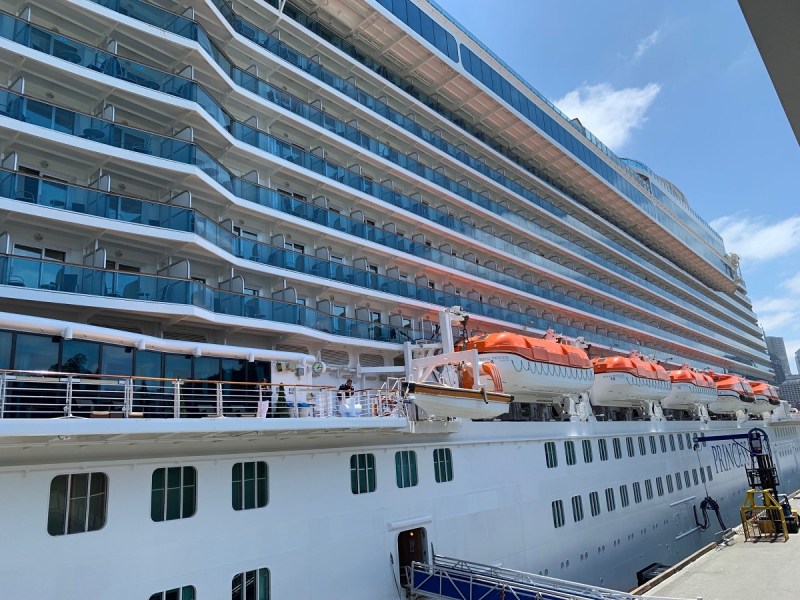 Above: Carnival’s Royal Princess cruise ship is outfitted to support Ocean Medallion wearables. This was not my vacation ship.

The slow Wi-Fi was a whopping $15 a day on the Carnival Imagination. There was no point in logging into Harry Potter: Wizards Unite out at sea. But we had a full crew of 17 extended family members aboard the ship. That was more than enough to keep me entertained at the pool, the buffet lines, and the cabin. Instead of playing my Switch at night, I read the George R.R. Martin book.

The buffet was sumptuous, but at my wife’s suggestion, I compensated by taking the stairs up and down the 10-deck ship. My iPhone told me I was getting anywhere from 10,000 to 17,000 steps a day. I walked 24.2 miles on the cruise itself and climbed 68 floors. That helped balance out the overeating. 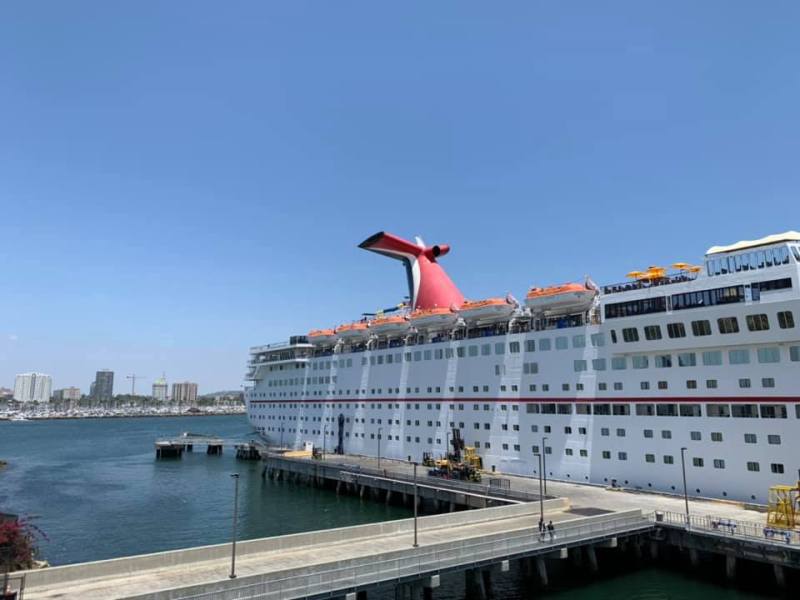 Above: The Carnival Imagination

My kid snatched the Switch to play Mario Kart and Mario Party with the younger cousins, but they didn’t invite an old guy like me to join them. And I never pulled out the Oculus Quest, as it would have been a bit of a hassle to link it to Wi-Fi. When we made it to Mexico, we spent a full day shopping in Ensenada, exploring the tourist trap where we happily played tourists. We saw the blowhole and made it back to the ship in time. I played a brief round of Harry Potter just to see if I could find some landmarks there, and I did.

It would have been a gaming-free vacation for me, had I not been able to steal the Switch back. I played a few rounds of Sleep Tight, a “bedtime shooter” game where a kid fights monsters in his room after he goes to sleep at night. We also found a good old-fashioned air hockey game in the arcade. We played that for a few rounds. 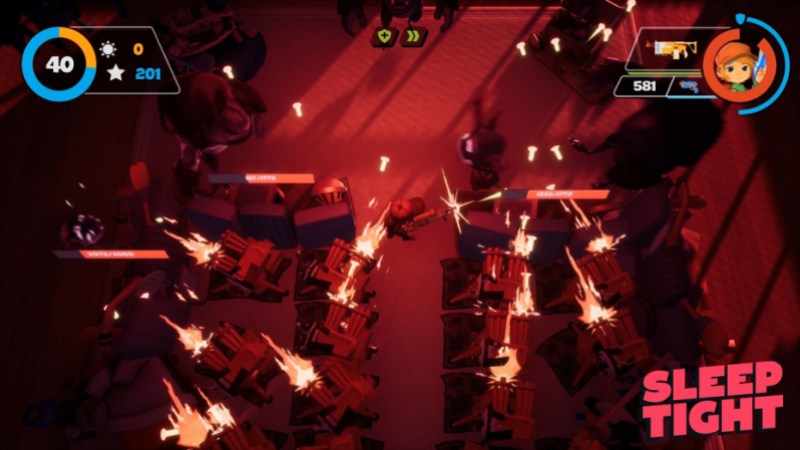 Above: Sleep Tight from We Are Fuzzy.

But I got to use all of that parental monitoring advice on myself, for the most part. I played games in moderation. I put away the phone for a while. Stopped doing a lot of email. Didn’t have to break out the computer. I connected with the kids and the extended family. And I generally unplugged from the outside world, except to check in on the big aftershock for the Southern California quake. The highlight in Ensenada was the blowhole, La Bufadora, where the waves crashed into the shore of Mexico. Or maybe disco dancing with my wife in the atrium of the cruise ship, while my kids watched from above. 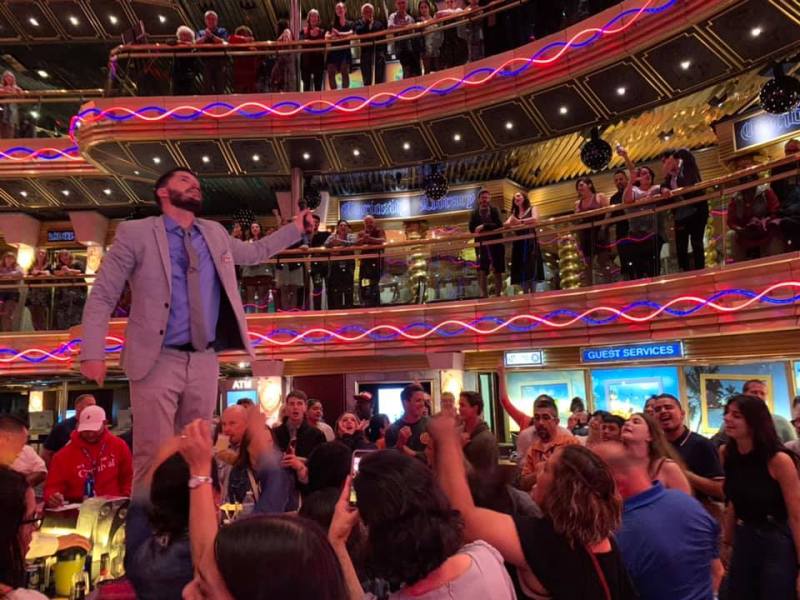 Above: Disco dancing on the cruise ship.

For just a brief moment in time, I broke some of my addiction to technology, games, and work. I soaked in a lot of experiences that came at me in totally random and accidental ways. As you can see from these pictures, these entertaining experiences were all so different — and mostly physical, not digital. It felt like I was rebuilding connective tissue with the family. And it was nice for my mental health.

Perhaps they shouldn’t outfit that cruise ship with modern tech. But that cruise was the longest three days of my life. And yes, it was good for me. If you’re like me, you could probably benefit from this kind of vacation too. Your spouse will approve. It will give you a warm and fuzzy feeling inside. So long as you don’t get hit by that weird stomach bug that 10 of us came home with.