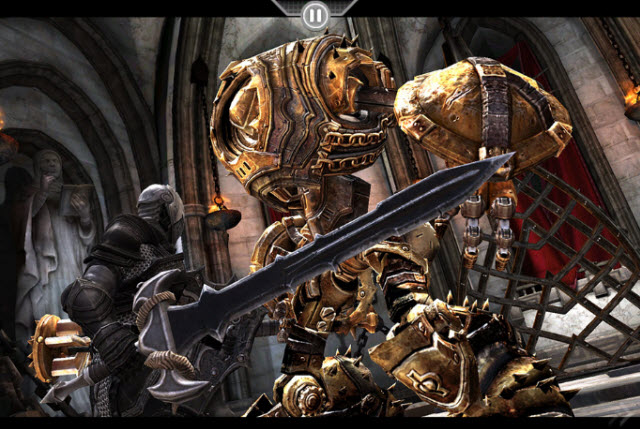 Steve Jobs never liked video games, particularly the violent ones. Years ago, when id Software’s John Carmack demonstrated a cool shooting game during one of Jobs’ keynotes, Jobs wouldn’t allow him to show any blood on the big screen.

That approach defined Apple’s stance on games, just at the moment that 3D games were flourishing due to the growth of powerful graphics hardware support. And it doomed the Mac to a secondary position.

No longer. With the iPhone, iPad, and iPod Touch, Apple has a built up a tremendous position in mobile games in just a few years. Its platforms are the target for the best mobile games, such as Infinity Blade 2, pictured above.

Now that Jobs is no longer running Apple, the question is whether Apple will be able to stretch its wings even more broadly in the game market. Apple executives certainly tout games at the company’s press conferences. Epic Games, for instance, was allowed to give a lengthy demo of Infinity Blade 2 at the recent iPhone 4S press conference.

But in many ways, that is thinking small. Consider that Apple has never exhibited at E3, the giant game show held in June in Los Angeles every year. It has also never held a public event where it focuses solely on the games being developed for the iOS platforms. It holds events for developers, but doesn’t make a big splash for the press when it does so. Apple could clearly get a big audience of press and developers if it held periodic game-focused events.

The problem isn’t that Apple lacks game support on iOS. It has roughly 100,000 games available, and it is competing head to head with Android to be the primary target platform for game developers. The problem is that Apple continues to have a very small staff dedicated to games (beyond the testing of them). Indeed, much of Apple’s success with games, especially in the early days of the App Store, has been accidental. It is the gamers and game developers that have pulled the Cupertino company headlong into supporting games with features such as in-app purchases and the (not-so-successful) Apple game center.

Peter Relan, chairman of YouWeb and chief executive of CrowdStar, says that, from a business point of view, Apple has clearly seen the value of games and has supported the category.

“Going forward, I believe they should highlight games more at events, showcase and feature apps like iSwifter, that bring thousands more games to iOS,” Relan said. “Ultimately, Steve Jobs cared about what users would want to do, more than anything else, and games is THE killer app category in the App Store.”

He adds, “Users have spoken convincingly to Apple: I want my MTV. And I want my games!”

Of course, I’m not particularly qualified in telling Apple what it should do. Apple has schooled everyone in the game industry about the disruptive power of digital distribution, rock-bottom pricing, and the wisdom of creating games for a true mass market. The results speak for themselves: According to mobile analytics firm Flurry and NPD data, iOS and Android had only 19 percent of the U.S. portable game market in 2009, compared to 11 percent for Sony’s PlayStation Portable and 70 percent for the Nintendo DS. In 2011, iOS and Android have 58 percent of the market, compared to 36 percent for the DS and 6 percent for the PSP. Nintendo is reporting its first fiscal loss ever, thanks in part to the struggles of its new portable gaming system, the 3DS.

Apple has made improvements for games with iOS 5, the latest version of its mobile operating system. Apple enabled multiplayer gaming in its Game Center and enabled Airplay Mirroring, which allows gamers to display their games on big screen TVs. The new iCloud service also lets gamers take a saved game and pick it up on a different iOS device. Apple’s Game Center has now been used by 65 million players, and more developers are making use of it.

Eric Peng, head of iPhone game developer Playmesh, said that he would appreciate Apple’s help in securing better distribution for games so that they can get noticed and discovered more easily. Apple could take an active role in that process the way that Japan’s DeNA and Gree mobile social networks do in Japan. By addressing distribution, Apple could generate more revenue for itself and publishers and help users cut through the clutter. Apple could also help developers target the right customers, given the wealth of information it has about consumers — much the way that Facebook does.

Peng said that he also hopes Apple will loosen or remove its approvals process for content, opening up to apps the way that Google has. That is one of the factors that has driven developers to Android. And Peng thinks Apple could do more to help game publishers expand internationally.

“I don’t see why Apple wouldn’t benefit by helping developers translate and localize to foreign markets,” he said. “This would create a better user experience for foreign users, which would help Apple sell their hardware better.”

There is room for improvement, particularly in doing a better job at communicating and listening. So here are more suggestions.

In short, here’s my advice to Apple CEO Tim Cook: Get into the game.

EDITOR’S NOTE: Like this column? Subscribe to the DeanBeat online and you can read future columns a whole day before they appear on the VentureBeat website. [Illustration by Tom Cheredar]