The first thing I did when I got the flagship iPhone XS Max was try out some games. I’ve been playing around with Apple’s latest device for a few weeks, and I’ve got some impressions about how well it runs games. This report is timely given the iPhone XS Max will soon have some competition from the upcoming Razer Phone 2.

As you may know, this isn’t a cheap phone, and so hopefully you’re going to be purchasing it for more than just games. At $1,100 for a 64GB version, you could be spending the same amount of money for a pretty good PC or gamer laptop. The iPhone has an awesome main camera with 12 megapixel resolution and 2X optical zoom. It has HDR, and the images look so good that I’ve used this camera to replace my Nikon point-and-shoot Coolpix P610 camera when I’m taking portraits of people or speakers on a distant stage.

But games are the real test. I tried out some easy ones first. After I upgraded to iOS 12 and transferred my older games to the iPhone XS Max, I fired up the two-year-old Pokémon Go. This isn’t a demanding game, but The Pokémon Company says just about everybody has it, as it has generated more than 800 million downloads to date and nearly $2 billion in revenue. I figured this was an important one for Apple and publisher Niantic Labs to get right. 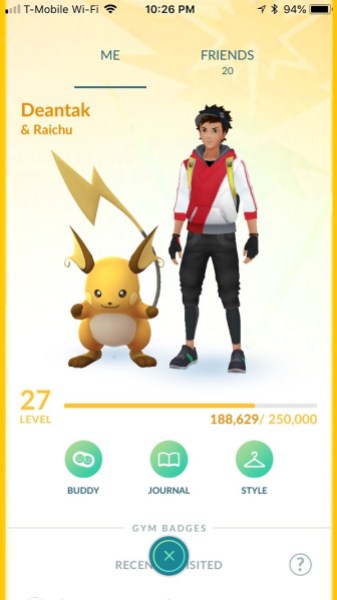 Above: That’s me, in case you see me out in the wild.

It ran for a couple of play sessions. But then something broke it. For a couple of weeks, I couldn’t get Pokémon Go to run at all. It crashed on the second loading screen and reverted back to the iPhone’s main screen. I checked with Apple support and Niantic. They couldn’t tell me why it wasn’t running, and they asked me to do a fresh install of the game. I did, but it still didn’t work.

Then three days ago, Niantic launched a new update with creatures of the Sinnoh region. Lo and behold, Pokémon Go was running again. But it wasn’t perfect. When I tried to turn off the augmented reality feature that shows the Pokémon out in the wild, it failed. I couldn’t switch it off. That ruled out playing at night. Niantic says they are still working on that fix.

The moral of the story is that even new stuff breaks. You’ve heard, maybe, about how you had to have the new iPhone’s screen on when you plugged in the power cord for it to start charging the phone. Apple issued a fix. The Pokémon Go problem has lasted a lot longer than I would have expected, given that shipments started on September 21. But eventually, they’re going to fix these things, and you have to be patient.

I also tried out another of my favorites, Dawn of Titans. That game didn’t work on the iPhone XS Max either. But now it does, and it looks so much more gorgeous on the new phone than it did on my old iPhone 6, which had a tiny 4.7-inch screen, compared to the iPhone XS Max’s 6.5-inch Super AMOLED touchscreen. Dawn of Titans came out at the high end, with cool graphics that you can see in the video embedded here. The game is so much better on a bigger screen, where you can see particles floating in the air and much more fluid movement in complex 3D battle scenes. The performance is much better on the new iPhone than the older one, and the sound is awesome coming out of the stereo speakers.

I also took a quick look at other games. Apple recommended a bunch of games in the app store that are perfect for showing off the iPhone XS Max. One of them was Shadow Fight 3, a sword fighting game from Nekki. I fired it up and you can see the great 3D graphics in the video. The movement is fluid, and the effects are good, like the sparks that fly when swords clash.

I also look at Zynga’s CSR 2 drag racing game. I thought the shiny cars and spinning wheels were also very cool to look at.

Sid Meier’s Civilization VI, a game that came out on the PC in 2016, can run beautifully on the iPhone XS Max, as you can also see in the video. If you had told me that an iPhone would be running a two-year-old PC game in all of its glory, I would have thought you were nuts. But that tells you how fast smartphone technology and 3D graphics on battery-operated devices is moving.

As you can tell from my experiences with the games, we’re still in an early launch stage for the iPhone XS Max. The screen is good and the games are being tweaked to run on it. But I’d like to see how games that are specifically designed to take advantage of things like 3D Touch, Face ID, and other features of the phone will fare in the months to come. I’ll also be comparing how this looks on rival phones like the upcoming Razer Phone 2.

Disclosure: Apple provided me with an iPhone XS Max for the purposes of this review.