Very soon, starting on November 8, we’re going to find out one of the answers to one of the great mysteries of the video game industry. And that is whether Hideo Kojima, the head of Kojima Productions and the creator of Death Stranding for Sony’s PlayStation, is a genius creator or a bit kooky. And we’ll also see whether Sony is sane or mad at the same time.

Kojima parted ways with longtime publisher Konami in 2015, after he completed Metal Gear Solid V: The Phantom Pain. At The Game Awards in December 2015, host Geoff Keighley skewered Konami for not allowing Kojima to travel to Los Angeles accept an award for the game. Instead, Keifer Sutherland accepted the award on Kojima’s behalf. This was a perfect way for the cult of personality to build around Kojima, through the “bromance” with Keighley.

Then Kojima announced that Kojima Productions would restart as an independent studio, and that it was making a PlayStation 4 exclusive for Sony. At Sony’s press event at Electronic Entertainment Expo (E3), Sony marched down some stairs and unveiled Death Stranding — an event that one video game CEO derisively and privately (probably a little jealously) referred to as a “coronation” in an interview with me. When Jeff Grubb and I saw the befuddling trailer together at E3 2018 (the one that ends with Lea Seydoux eating some kind of grub worm), we just laughed out loud because we had no clue what we watched. 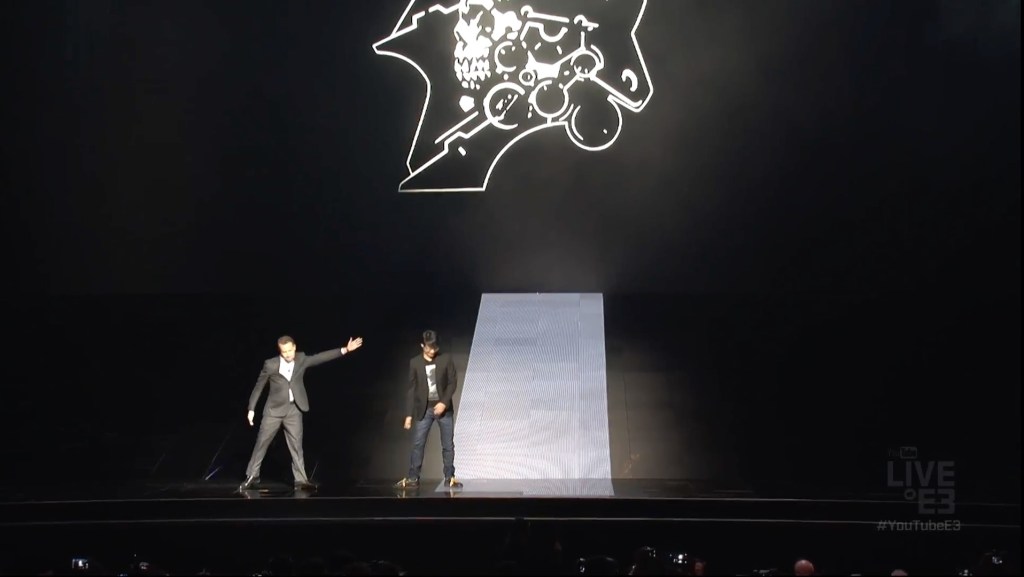 With the release of one trailer after another, we saw how Kojima worked his close friends Guillermo del Toro and Keighley into the game and that he was working with famous actors like Norman Reedus, Troy Baker, Mads Mikkelsen, and Lindsay Wagner. In 2016, Kojima was able to attend The Game Awards and receive the “industry icon” award.

The official soundtrack of the game features bands like Low Roar and Chvrches, and it is being released separately through RCA Records and Sony on November 7. Kojima was also the star of the show at this year’s Gamescom pre-show special, hosted by Keighley. It was the last part in the theatrical myth-making of the rock star game developer, sort of like the return of Elton John to the concert circuit.

The beginning of Death Stranding

You’ll see some reviews hit as early as today. But I’m only a few hours into the game. And I am as befuddled as ever. As we always knew, Kojima is still very partial to long cutscenes, where video animations play. The user doesn’t control the game until five minutes into the beginning. And even then, it is only for a very brief time until another cutscene starts.

When Reedus’ character, Sam Porter Bridges, seeks shelter from a poisonous rain (called a Timefall, which makes you age), he is stalked by a beast from another dimension. He has to stay still and not even breathe loudly in order to stay hidden from the beast, which leaves footprints all over the cave. It’s a bit of horror that is repeated a little later in the game, where you find out what happens if the beast finds you. You also pick up a baby, dubbed BB for Bridge Baby, who is part of a kind of early warning system for you. 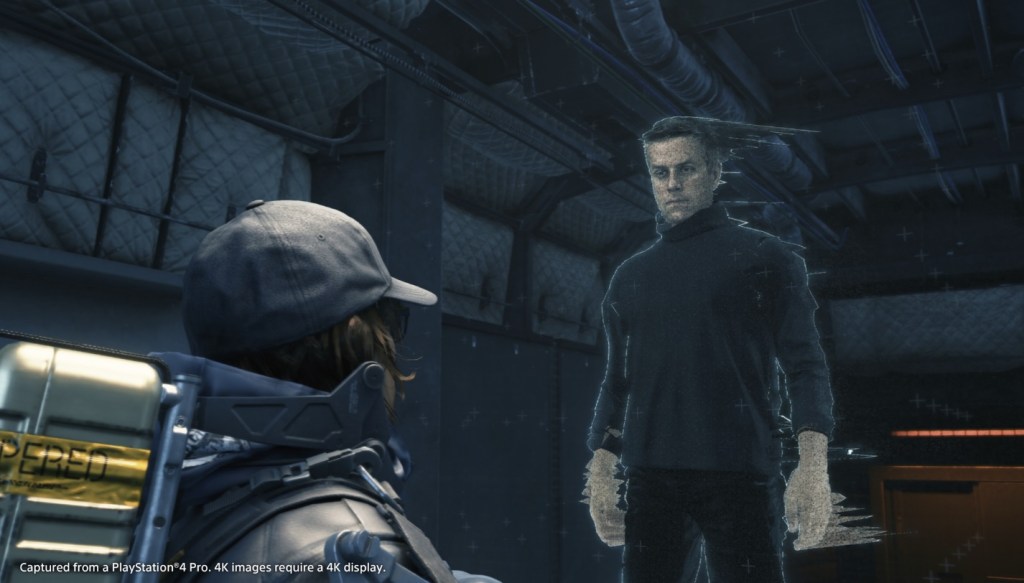 Above: Geoff Keighley in Death Stranding.

The horrifying beginning of the game is actually very well done, and it intrigued me. An original song, “Don’t be so serious,” creates a moody beginning for the story. I took that to be Kojima’s own joke about the hype around Death Stranding. You learn that Sam has a kind of special capability, dubbed DOOMS, that alerts him to the presence of the interdimensional beasts, dubbed BTs, and when coupled with the baby, the two of them can dodge many of the hazards in the world. With these skills, Sam can be a very effective delivery man.

The beginning slowed down as I learned the mechanics of being a glorified postal service worker in the post-apocalyptic world. Hilariously, you have to be able to put a bunch of boxes on your back and balance them so you don’t tip over. As you run through the landscape, you have to pay careful attention, balancing yourself with the game controller, so that you don’t fall and damage the goods.

Sam runs into Guillermo del Toro (who plays a character named Deadman) and other characters whose existence seems to be to explain the very complicated world of Death Stranding. In this world, America is isolated into many different enclaves of people who have survived a cataclysmic event. The initial part of the game introduces so many mysteries, like why Sam cries after the beast departs, and why there is both a usable toilet and shower in Sam’s room.

The term “stranding” itself refers to whales stranding themselves on beaches. And we learn that Lindsay Wagner’s character, Amelie, is stranded on a beach in California. Sam has to run across the country, connect all of the communities, and then rescue Amelie — a kind of beached whale in her own right — from the bad guys holding her hostage in California. It’s like they have to restore the internet among the isolated cities. 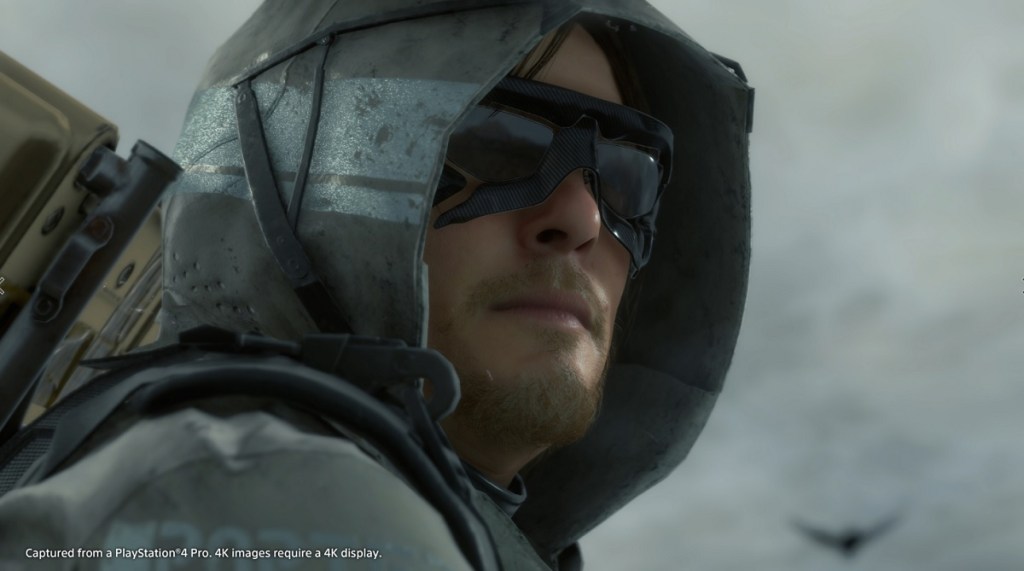 Above: Norman Reedus is Sam Porter in Death Stranding.

Along the way, Sam is going to run into a lot of trouble, kind of like Kevin Costner in The Postman. In Kojima’s post-apocalyptic America, someone has torn the country apart (yes, there is probably some Kojima social commentary on Donald Trump there), and it’s up to Sam to put it back together and restore the connections between communities. Kojima himself has said the game aims to teach the true importance of forging connections with others.

So far, it is very well done. I’m having a hard enough time balancing my big loads to carry. And it gets harder still when others are hunting me. But every new scene reveals something more enigmatic, and I am moving forward on the assumption that the story and setting will get more complicated and mysterious as we proceed, until Kojima gives us all or some of the answers in the end.

It may take dozens of hours before I can finish it. And by then, I will know if the skeptics or the believers are right. I don’t know if I just won’t get it, and everybody else will see the genius of it, or if it’s all been a bit of overhype. But now that the game is finally here, I have to say. This has been one of the most delightful mysteries in gaming, and I’m almost glad that I don’t know the real answer yet.