Todd Howard isn’t a big guy, but he’s going to be honored as one of the giants of the video game industry. Howard, creator of blockbuster games such as Fallout 4 and The Elder Scrolls V: Skyrim, will be given the prestigious lifetime achievement award at the annual Game Developers Choice Awards in March. This is a big deal because Howard’s peers have chosen to give the award to somebody who has been one of the most commercially successful game developers.

Howard is the rare combination of an artist who grasps the craft of making video games and is able to use that talent to make mainstream titles that sell in the tens of millions of units and generate billions of dollars for his company, Bethesda Game Studios. The studio is a division of Bethesda Softworks, which is itself a division of ZeniMax Media. The award is considered one of the most prestigious in gaming because it honors the recipient’s entire body of work, and it is awarded by game development peers.

Howard, the game director at Bethesda and steward of the Fallout and Elder Scrolls action role-playing game series, will receive the award at the Game Developers Conference event in San Francisco, with the ceremony falling on March 16. The award recognizes his innovative contributions to open world game play and game development. 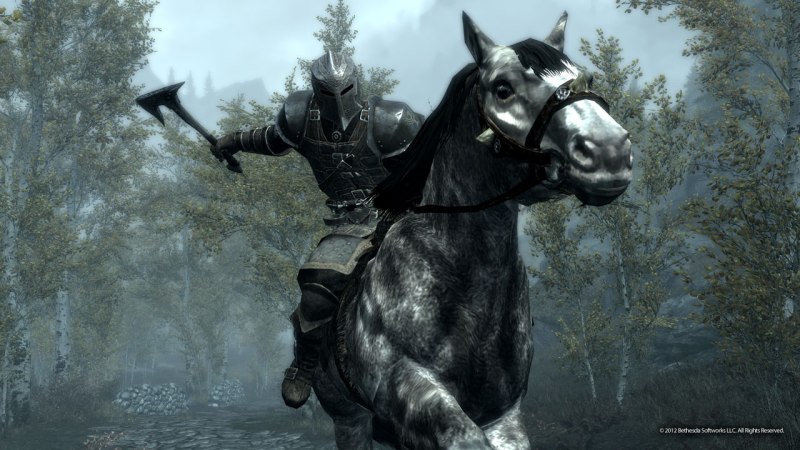 Above: I wonder how much someone is going to charge for horse armor.

That’s because games such as Fallout 4 and Skyrim aren’t just linear experiences, which you can finish by following a single narrative. Instead, they are full-fledged virtual worlds, as alive as the fictional world of Middle-earth, created by J.R.R. Tolkien, author of The Hobbit and The Lord of the Rings.

Now that may sound like marketing fluff. But in the case of Fallout 4 and Skyrim, it happens to be true because the worlds are massive. The world of Skyrim, a fantasy role-playing game series, even has its own “dragon language.” You could adopt your own children, build a home, and swim underwater. Fallout 4, a role-playing action-adventure set in a post-apocalyptic wasteland, has more than 400 hours of game play in it. There are 50 guns in the game with more than 700 modifications. These are open worlds, where the player is in charge of the story and what happens next.

“The Elder Scrolls and Fallout series present gamers with fully realized worlds filled with vast landscapes, and mystery at every corner. We’re proud to honor the visionary developer for his leadership in creating these universes,” said Meggan Scavio, general manager of all GDC events, in a statement. “When you’re completely captivated by these detailed worlds, it’s easy to forget the level of dedicated work and creativity that went into every square inch. This award reflects on the amazing craft of Todd Howard and his team in making worlds as real as anything on Earth.” 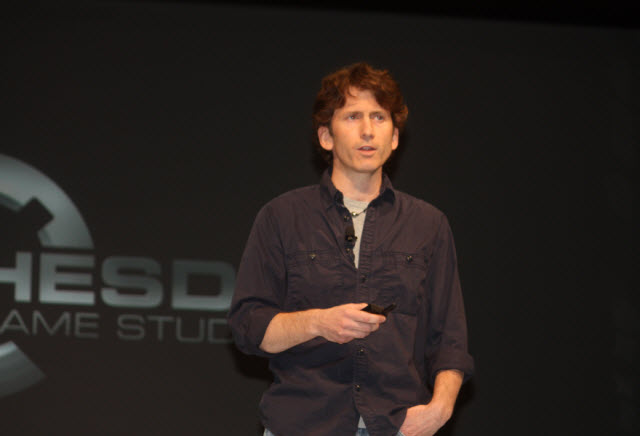 Above: Todd Howard talking about Skyrim at the Dice Summit in 2012.

Skyrim took something like 100 people about 5 years to make.

When I heard him talk at the previous Dice, he ended his talk by noting that the U.S. Supreme Court ruled that games are legally works of art. And that means game designers have to show what they can do with that freedom.

Skyrim shipped in 2011, and it took five years for Howard’s team to create Fallout 4. If you figure 100 people were on the Fallout 4 team, that kind of game might cost $100 million to $200 million to make and market. (That’s my guess).

Howard is also an interesting character because has been at the same studio for 22 years. The company has certainly changed around him, as owner ZeniMax Media has amassed a number of game studios, including id Software, the maker of the Doom series.

ZeniMax has been acquiring the rights to various game properties (including the original Fallout) from a variety of companies, and it has been building teams to make high-end PC and console games based on those well-known properties. Over time, ZeniMax has raised more than $450 million in private equity funding to finance its deals, such as the purchase of id Software.

It is this structure within a larger company that allows Howard to do what he does and to take all of the time he needs to get a game right. In many companies, there’s an unhappy tension between the money people and the creators. The money people want to rush the game out, and the creator wants to make it perfect. I don’t know if Howard has this kind of tension or not. When I interviewed him on the red carpet a couple of years ago, I teased him about why he didn’t have a game ready to announced.

It was a little comment, but it was something that I remembered. Even a guy like this, who has this kind of track record, seems to have his own battles to fight.

Looking from the outside, there doesn’t appear to be a ton of pressure on Howard to get his stuff done sooner. Bethesda didn’t even announce Fallout 4, the big game from 2015, until the Electronic Entertainment Expo (E3) in June of that year. And when it did so at the Dolby Theater, where the Oscars are held, Howard walked out on stage and got a huge roar of applause. His company leaders stood back in the shadows and let the game maker do the talking and get the accolades. 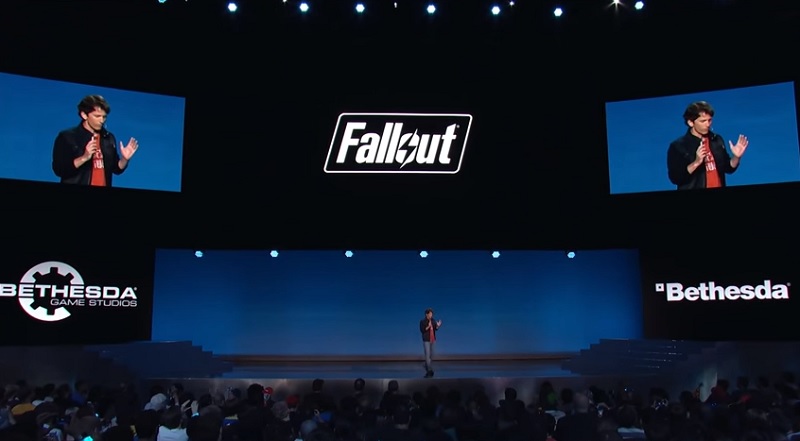 Above: Todd Howard introduces Fallout 4 in the Dolby Theater in 2015.

He added, “Games can do things that nothing else in entertainment can. They can transport you to new worlds. They can give the true wonder of discovery and often the pride of accomplishing something yourself in a game. It’s a wonderful moment.”

Now the game industry has a lot of people who promise a lot and under-deliver. Howard is one of those people who doesn’t promise anything and then delivers something that is truly astounding. Howard was an early pioneer of 3D worlds, creating an early 3D shooter on the PC in 1995 with The Terminator: Future Shock. He was also the lead on titles like The Elder Scrolls: Oblivion and Fallout 3. Skyrim sold more than 10 million units, and Fallout 4 has shipped more than 12 million copies. He also directed Fallout Shelter, a mobile title that hit the top of the app stores last summer.

Howard is going to talk again at the Dice Summit in a couple of weeks. So we’re going to see more of Todd Howard publicly in the next few weeks than we’ve seen in the past five years. It’s a kind of victory lap for him. But it will be fun.

He’s one of the people that the game industry can honor and say, “Look how far we’ve come.” 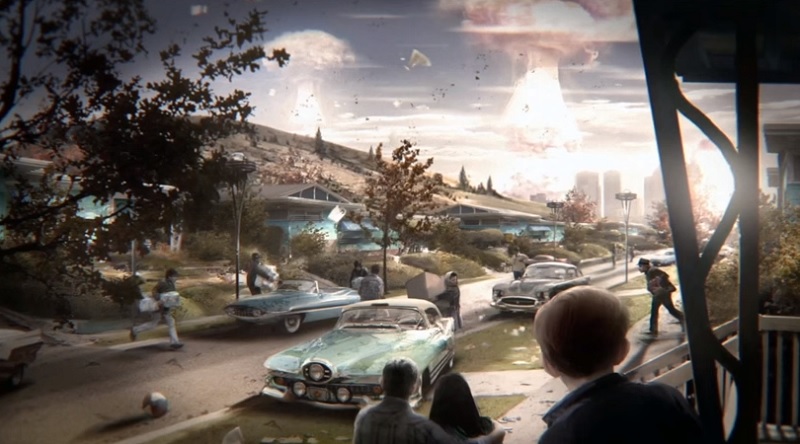