Electronic Arts is no longer the biggest or most profitable company in the video game business. But its influence stretches well beyond the publisher’s current size, and this was evident at GamesBeat 2014 conference this week, where we had no fewer than eight EA executives talking separately onstage. Some have moved on to prominent roles at companies like Zynga, Benchmark, Unity, and other places.

I hope to write more about the things they all said at our conference, but for now I’ll zero in on the separate conversations we had with Andrew Wilson, current chief executive of EA, and John Riccitiello, his predecessor. They are the ones who are responsible for EA’s current condition, and their decisions will determine whether it will continue to be one of the great companies in gaming’s new “golden age,” as Riccitiello referred to the current boom that’s taking place on all fronts. Riccitiello pushed EA to the top of a mountain, and Wilson has to ski down it now. 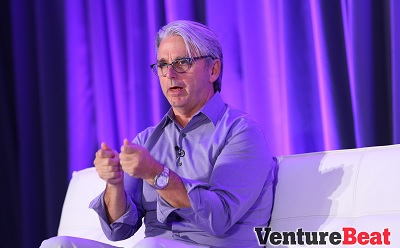 Riccitiello has been out of EA for a year-and-a-half, but the fates of these two characters are tied together. Riccitiello left because EA’s board wasn’t happy with its financial performance or its capability to keep pace with its rivals. But Riccitiello started the transformation of EA from a packaged goods console game company to its current status today. Sixty percent of the publisher’s most recent quarterly revenues came from digital sales. Wilson came in to enjoy the payoffs of years of investments.

When he came onstage later, Riccitiello noted that this fall’s games are among the first that he did not greenlight or oversee in some way.

With a strong emphasis on core franchises like Madden NFL Football and FIFA Soccer, and with new deals in place to make games based on Star Wars and Titanfall (a multiplayer first-person shooter from the original makers of Call of Duty), Riccitiello said, “I think they’re back on top. … I don’t want to take credit for the last year-and-a-half. I am just proud of what they’ve done.”

He added that learning to deal with live operations in the digital publishing world is a huge shift in culture for EA.

That was a classy way for Riccitiello to acknowledge that the man who replaced him is doing good things.

In its most recent quarter, EA said people played more than 13.6 billion online sessions in EA games for a total of 2.4 billion hours. The screens for these range from 4 inches to 60 inches, with sessions ranging from 2 minutes to 2 hours (or more). More than 300 million people are playing EA games every month. EA is benefiting from a strong revival of the console business at a time when PC gaming is strong, and mobile continues to expand like crazy. 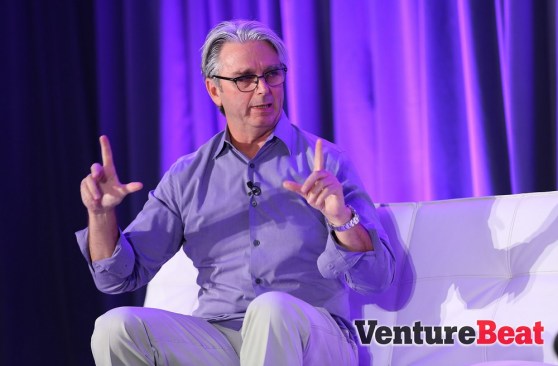 Speaking with Mike Vorhaus of Magid Advisors, Wilson opened our conference with a joke that after a full year, he still has his job. That is an accomplishment in the industry, given the volatile state of the game business. Wilson has spent 14 years at EA, starting with developing games at its studios. That’s where he picked up his belief in putting the players at the center.

“I wanted to get back to that,” Wilson said.

In the next three years or so, Wilson believes he can focus EA on being a “player-first” company, accelerate the shift to digital gaming, and focus on creating a single EA that doesn’t operate in what he terms as different “silos.” He wants people to feel like EA has become a new company.

Wilson believes that the future of games will be immersion for the player. That could involve moving to technologies like virtual reality, which is the idea behind Oculus Rift, the VR goggles created by Oculus VR (and a company that Riccitiello has advised). Riccitiello said that Oculus has led a charmed life because it is maniacal focus on building something great. Wilson believes people will get into the experience of VR because it lets them do things they can’t otherwise do.

“We believe there is a future where there will be more people playing more games across more devices,” Wilson said. 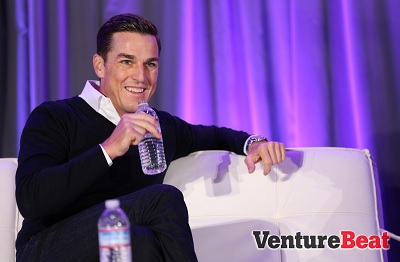 Above: Andrew Wilson of EA at GamesBeat 2014

EA is incubating a bunch of its experiments in new kinds of games across various labs in the company. While it is looking at innovations, EA is not throwing spaghetti at the wall. It is picking its shots and polishing the experiments until they are quality games. Wilson has approved delays for potential blockbusters like Battlefield: Hardline and Dragon Age: Inquisition. Good companies delay games that aren’t ready. EA can afford to this now because of this “golden age.” But companies that delay delayed efforts will lose their way.

Owen Mahoney, the CEO of Nexon and another former EA executive, the big Asian free-to-play game company, reminded us in his talk at GamesBeat 2014 that games have to be fun and different. It’s a creative business, and making clones will only get you so far. About six months ago, Nexon did a review of internal studios and found it had to cut a bunch of games. It sought outside developers for better ideas, and, counting the surviving. It ended up with a slate of 26 games in development.

EA has gone through that kind of transition already. It has weeded out a lot of weak stuff, and it is focusing on rebooting a lot of franchises and creating new ones. Frank Gibeau, the former head of the game labels, is now in charge of mobile. He said recently that EA has a dozen well-designed mobile games coming down the road.

“Mobile hasn’t replaced traditional ways of playing,” he said. “It can augmented or enhanced it. For many people, it will be the only way they enjoy games. For others, it will enhance what they do. For that reason, we’re investing heavily in mobile games. … We think it can be really meaningful part of our company’s basis.”

By staying focused on its big properties and trying out new things in a disciplined way, EA can improve its chances for success. Anything can happen, as Wilson pointed out that three years is a full “epoch” in the game industry with so many disruptions sweeping through it.

“I look at our industry, and we’re exactly where we want to be,” Wilson.

Still, EA has a lot of new competition that didn’t exist before. Companies like Activision Blizzard and Tencent have more revenues and financial muscle. Mobile game companies like Supercell, King, GungHo Entertainment, Machine Zone, and Glu Mobile aren’t going to give up their grip on the top-grossing charts in mobile without a fight. The Asians are coming into the Western markets with the financial capacity to swallow companies like EA whole. EA may look good, but compared to its competition, its accomplishments so far in this golden age aren’t as impressive.

In his own life after EA, Riccitiello has done well as an adviser. He has sorted through the soup of startups and found the meaty nuggets of companies like Oculus, Will Wright’s Syntertainment, and Unity Technologies. Each of these companies shows a lot of promise in the golden age, and it is good for Riccitiello to be associated with them.

Bob Meese, the head of worldwide business development for Google Play, observed that a lot of companies are learning humility. We’ve seen a number rocket upward on a big hit, only to crash on their next attempt. Zynga and King fit into this category. EA is so broad that it doesn’t rely upon any one thing.

But EA’s current CEO and its former CEO have learned humility. They are looking both forward and backward, trying to put in place agile strategies. And they are preparing for anything to happen. I really enjoyed our GamesBeat 2014 event and appreciated everyone who came to it. Thank you.

The conference gave me the chance to see these interesting characters, side by side, and have them teach me about the past and future of EA — and games.

You can watch my interview with Riccitiello here, and Vorhaus’ conversation with Wilson here.