This week, I found myself at a party at Löyly, a sauna and bar at the edge of the Baltic Sea in Helsinki, Finland. A loud party was going on around me, but I found myself in a conversation with Samuli Syvähuoko, who had just come out of the sauna and was wrapped in just a white towel. It was an interesting and very odd part of Slush, the tech conference that now draws more than 25,000 people — including 2,000 global investors — to Helsinki.

The chairman of Sisu Game Ventures and founder of Remedy Entertainment talked about how he was so excited about cloud gaming and how it will sweep through the games industry in the next five years. He has started seven companies and invested in 47 of them, and he is chairman of Mainframe Industries, a new online games company.

Syvähuoko explained to me the elements of success for Helsinki’s entrepreneurs, who like startup creators in Silicon Valley and Israel have become the envy of the world. One of those elements is the word “sisu,” which translates to perseverance or a gritty courage. Veterans have that. And he also valued collaboration, as something that Finnish game developers engage in deeply across company lines. If they are successful, they share their secrets and they don’t take undue credit. At places like the sauna where I was spectating the collaboration in action, but not participating. 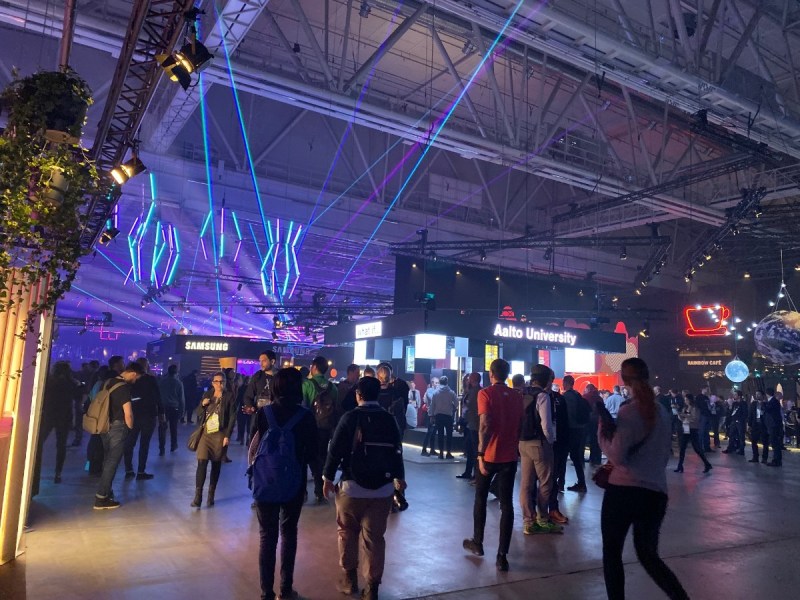 Above: Slush fills all of Helsinki’s convention center.

Our meeting was part of the side events around Slush, which was started by 2008 Helene Auramo, Kai Lemmetty, Ville Vesterinen, and Peter Vesterbacka. The latter became famous as the marketer for Rovio and Angry Birds, and now he is an investor in a lot of companies. Slush now draws 3,500 startups and 600 journalists among its attendees, and the student-run nonprofit event has made a huge difference in changing the attitudes of young people in Finland, said Andreas Saari, CEO of Slush, at a dinner.

Years ago, in the early 2000s, about 1% of Finnish students wanted to become entrepreneurs. But having seen the results of success, about 35% to 40% of 4,000 students polled in 2017 wanted to join or create startups, he said.

“Most of the change that this creates is yet to be seen,” he said.

That’s a cultural change for a whole society that was once in love with big companies. It struck me when I saw one of the Slush stages was actually in the middle of a shopping mall. Entrepreneurs were getting up on stage and giving pitches, as commuters and shoppers whizzed by. 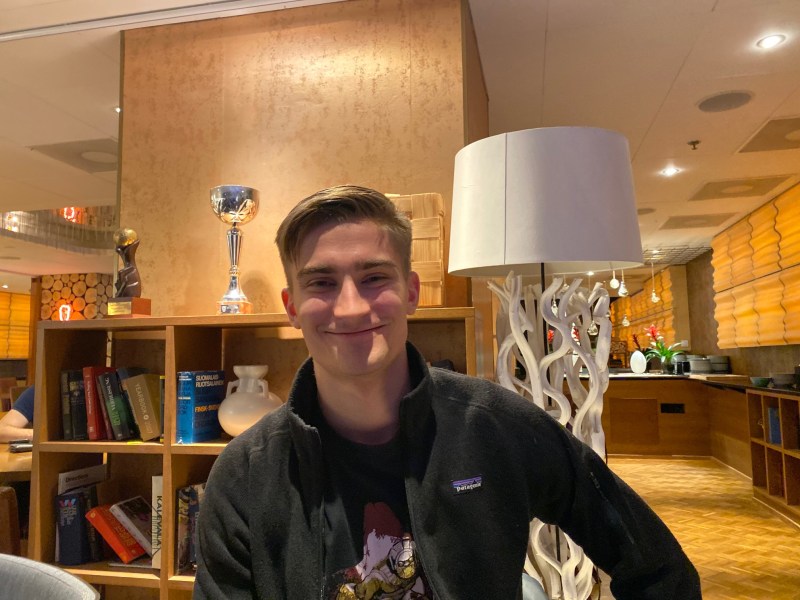 Above: Miika Huttunen is COO of Slush.

Nokia dominated the tech sector in this country of 5 million people for decades. But its layoffs and woes, based on its failure to compete with Apple and Samsung in smartphones and tablets, shrank its influence and resulted in the Microsoft bagging its handset business. But back in the 1990s, the Finnish government had the wisdom of making investments in startups. It invested tens of millions of euros, and it hit huge returns with companies like Supercell, which grow up and pay taxes — from four billion-dollar games — many times beyond their original loans and grants. The government entity Tekes continues to make investments to this day.

The Finnish mobile game sector has its origins in the Demoscene movement of the early 1990s, when various computer whizzes gathered together to show off their inventions at a regular group. It was not unlike the Homebrew Computer Club of the 1970s that gave rise to Apple. It was no surprise that the early mobile game Snake appeared in 1997. That expertise produced people like Ilkka Paananen, CEO of Supercell, and when mobile gaming finally took off with the iPhone a decade ago, the Finns were ready for it. They drew outside investors like Peter Levin, head of Griffin Gaming Ventures and former head of Lionsgate’s game business.

Many investors flocked to the region to invest in new game companies following the success of those firms. Supercell was one of the beneficiaries of the adoption of the free-to-play business model in the West. But was its success just a fluke? After all, the number of game startups is down in Finland, from a peak of 260 in 2016.

It seemed for a while that the small group of talented people in Finland had too much money chasing it, but now the success of a new wave of companies like Next Games and Small Giant Games is proving that there is something special in the water in Finland, as Vesterbacka likes to say.

Miika Huttunen, COO of Slush, said that games are becoming a bigger part of Slush again, with side events like the Press Start event I attended.

“We’ve seen that gaming has to be an integral part of Slush,” he said.

American game companies have taken note of the continued activity in Helsinki.

Jam City, based in Culver City, California, sponsored a big party this week and sent speakers such as Chris DeWolfe, CEO of Jam City. And Matt Bromberg, chief operating officer of Zynga, was speaking alongside Timo Soininen, CEO of Small Giant Games, the Helsinki-based maker of Empires & Puzzles. 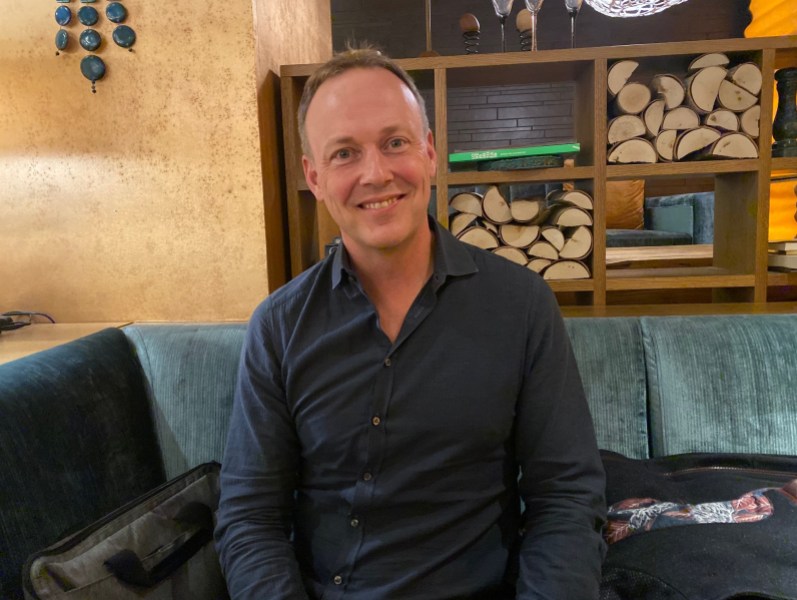 Zynga acquired Small Giant for at least $560 million (price tag for 80%) a year ago. In an interview, Soininen said the company has grown to 60 people and is working on new games beyond its huge hit. The hit came about four years into Small Giants history, and it was its third title. Soininen said his team of 12 people killed games that weren’t catching on.

They stepped back and analyzed the top 50 mobile games. They looked at all of the elements that made them successful, and carved these out almost like Lego pieces. They wanted to focus on a “midcore” game, or one with deeper depth and interaction that was easy to get into.

“We formed a view of what were the mechanics that were working, what was not, and why,” Soininen said in our interview.

They wanted to make an “advanced casual game that was more like a hobby than a game,” Soininen said. “What if you used match-3 mechanics to target army shields and use it to bridge casual and hardcore games?” 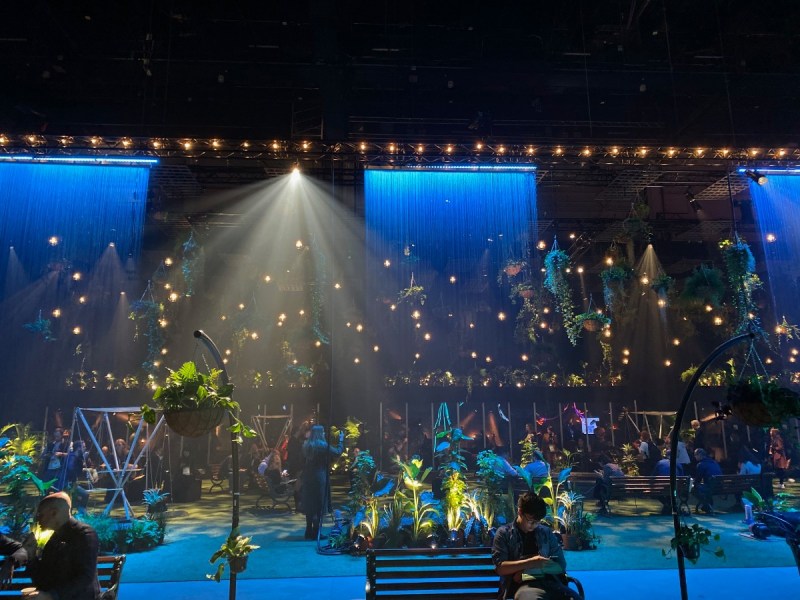 Above: Slush has some beautiful installations.

The team built its own analytics stack to figure out what was working and was not. Observers thought they were crazy to dedicate some of their small staff to that task. But they used the data to revise and iterate on the game and find something that monetized. They also learned from the broader community.

They thought holistically not only about game design, but also user acquisition and other disciplines that “replaced luck with something you can control.” These were things that typical game developers didn’t enjoy doing, but the veterans on the team had learned from many years of work that it mattered.

“We had a financial model and a business model in place,” Soininen said.

This could always come to an end, as Empires & Puzzles is only 2.5 years old. But the company is also working on Puzzle Combat and it is also working hard on making sure that Empires & Puzzles stays strong as an ongoing game with new content and live operations. But the investment in the game continues, and Small Giant Games continues to look for innovations to make its players happy.

“We have been able to control our own destiny, even under Zynga,” said Soininen. “We are a little baby in the market. We hope we can last for years.”

The Finnish baby is growing up. And this kind of company was born from the ecosystem, one that regularly produces spinoffs from the early game companies, and it was only possible because of that spirit of collaboration among the Finns and that sense of “sisu.” It would be wise for Slush and the government of Finland to continue to do what they need to do to keep all of this going.

And a sad note

Meanwhile, back in the U.S., I wanted to acknowledge the sad passing of two game industry veterans. Matthew McDonald, cofounder of Heavy Water, passed away recently. And Brad McQuaid, co-creator of the original Everquest and a pioneer of online games, also died. These passings have left the game development community in mourning. Rest in peace.

Disclosure: The organizers of Slush paid my way to Helsinki, where I moderated a session. Our coverage remains objective.