I’m looking forward to Steven Spielberg’s upcoming film based on Ernest Cline’s virtual reality sci-fi novel Ready Player One. In one scene in that 2011 tome, a group of hackers gather to dance in a virtual night club. They float in the air and bump and grind to pulse-pounding music as a masked DJ looms over the crowd. It was one of many iconic moments about our VR future in the sci-fi novel.

And I got to experience a little taste of that scene yesterday at High Fidelity, Philip Rosedale’s VR world company in San Francisco. Rosedale (who will be a speaker at our upcoming GamesBeat Summit 2018 event; check out our $500 indie dev ticket) was the visionary behind Second Life, the online virtual world built by his former company, Linden Lab.

Yes, I went dancing in the dance club in VR, and talked to a bunch of people all at once. I even allowed strangers to touch my avatar in VR so that I could physically feel what it was like to have a sense of touch in the cyber world. 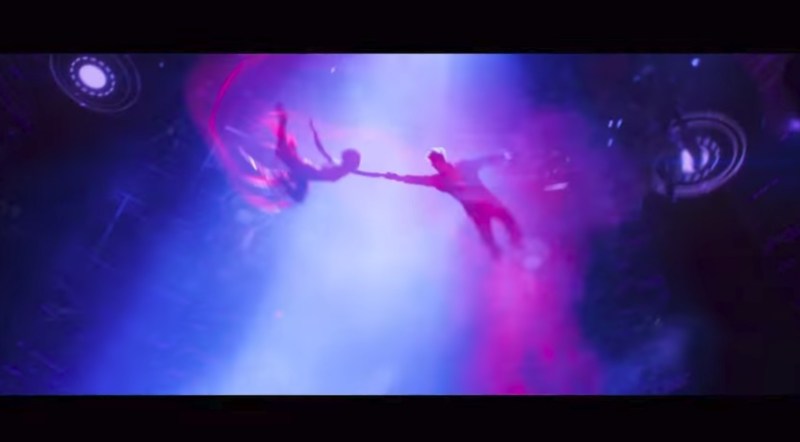 “‘We’re showing this for a little party today, and it’s just the beginning,” said Philip Rosedale, CEO of High Fidelity, in an interview, pointing at the room with a couple of dozen VR headsets and computers. “In a short while, we’ll bring in teachers and a class on a field trip here. We’ll start going on virtual trips with tour guides, so the teacher can take you through the pyramids in Egypt. They could send kids out to look in the environment for a hieroglyphic of a jackal and then come back. This is the start of social VR experiences. Games are fun, but it’s the social experiences that will bring people together and make a lasting impact.”

The experience felt real, as the movements of the real dancers were in sync with their virtual characters. High Fidelity made it possible by bringing down the latency, or interaction delays, to about a tenth of a second. The quick interaction, combined with the lights and the sound of music and voices, made the dancing experience more believable in VR, Rosedale said.

High Fidelity, which has 50 people working in San Francisco, has created a collection of VR spaces than a continuous world, like Second Life. But it will grow over time as the community members create more content and High Fidelity starts to launch the full version of the world later this year.

Yesterday, we just got a small sneak peek. I joined a number of other journalists on the dance floor to try it out in a room where a bunch of the VR machines were all networked together. 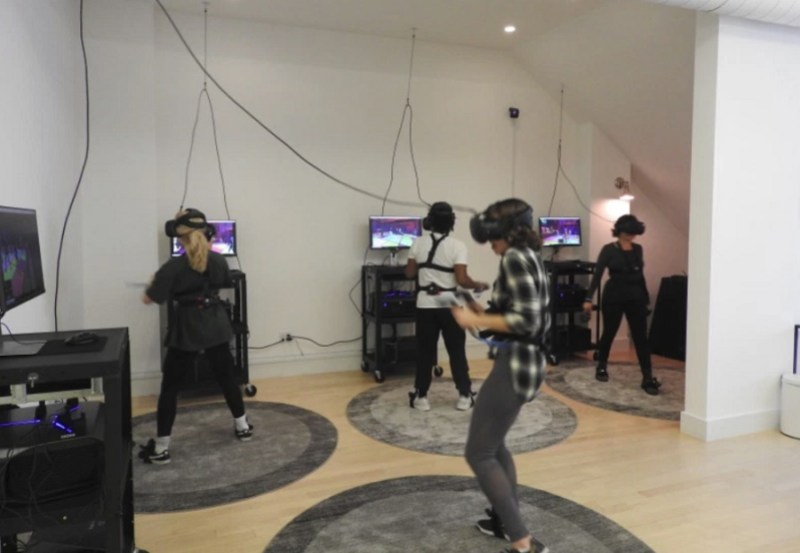 Above: Dancers in High Fidelity.

We donned Oculus Rift VR headsets and were transported to the balcony above the dance floor. Rosedale joined us with his own silver-haired avatar. He showed me how to walk using the Oculus Touch controllers, or how to teleport around the room. When I spoke, my Avatar’s lips moved. We walked downstairs to the multicolored tiles on the floor, where a bunch of other dancers were making fancy moves.

We saw a dancer floating in the air, like they do in Ready Player One. And we saw a dancer upside down, defying gravity, walking on the bottom of a crystal disco ball. We gathered around Rosedale and struggled to listen to him amid the dance music. But I could hear him. The audio seemed to come from different directions, but I had trouble identifying which avatar was talking until I saw the avatar’s lips move in sync with the voice.

High Fidelity brought in a half-dozen dancers and equipped them with HTC Vive VR headsets. They also had Vive Trackers, or sensors that were attached to their legs, hips, and backs. Those sensors captured their full body movements, and High Fidelity translated those moves into much better action on the dance floor. I could only wave my arms around, but those dancers were moving everything. 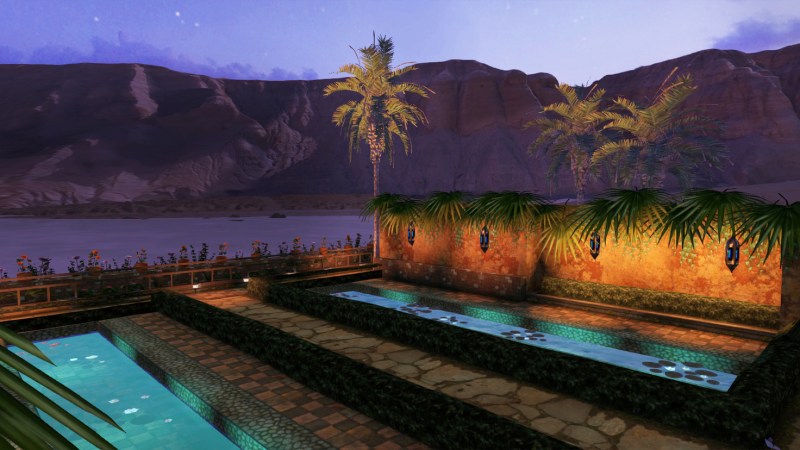 Above: The place where I interviewed Flash.

The virtual dance club, dubbed Rust, was designed by one of High Fidelity’s community members. It had disco lights and a DJ in real life named Tha Phlash, one of the top DJs on Periscope. He had his own avatar, or virtual character, with a huge fiberglass-like head. When he spoke, his avatar’s lips moved, and he encouraged everybody to start dancing to his blaring hip-hop music.

In a quiet place dubbed the Oasis, I interviewed Tha Phlash, and it was the first such interview I did in VR. His hope is to make money through tips from other virtual visitors.

“This world is already here,” The Phlash said. “I’m all about bringing people into new experiences and making them happy.” 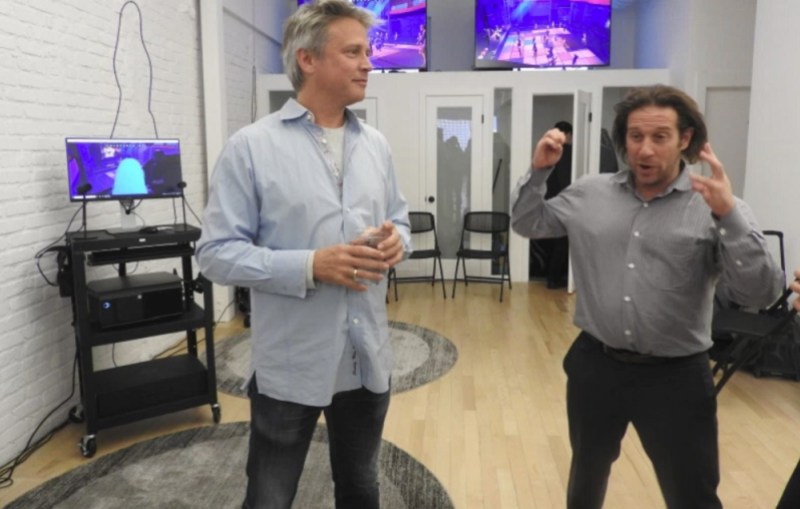 Above: Philip Rosedale (left) of High Fidelity and Jeremy Bailenson of Stanford.

“You can test a lot of things in VR to see how they compare to real life,” said Jeremy Bailenson, a VR expert and communications professor at Stanford University, in an interview. “You can get up close to someone and violate that by about ten centimeters and see how that feels. If you mimic someone non-verbally, like in dancing, they notice you more and like you more. Here, in VR, you could do that with 20 people.”

Bailenson just published a book, Experience on Demand: What virtual reality is, how it works, and what it can do. It’s about all of the ways that VR will blur the lines between illusion and reality. He said he looked forward to all of the educational applications of VR.

“When you start bringing groups of students in here, I want to be there,” Bailenson said. “It’s maddening that all of the other environments force the students to be in different places, not in the same place.”

Rosedale looks forward to VR places where you can travel to places like the Caves of Lascaux in France, where ancient cave drawings have been preserved but are no longer accessible to the public for preservation purposes.

High Fidelity still has a lot of work to do. Our avatars were bumping into each other in VR, and sometimes they were all stacked together in the same place, with arms and legs of different avatars combined in so-called “clipping” computer art problems. But over time, proper physics simulations and other fixes will make the experiences feel more realistic.

“I’ve been in this for 20 years, and to me it feels like we’re seeing so much progress,” Bailenson said.

The virtual touch experience was weird, and it was reminiscent of the first Ready Player One trailer. David Eagleman, the founder of NeoSensory, brought a couple of “haptic vests” to the High Fidelity event to show off what they could do. I donned one of the vests, which was a fairly tight fit for me, and went into the world with another journalist. 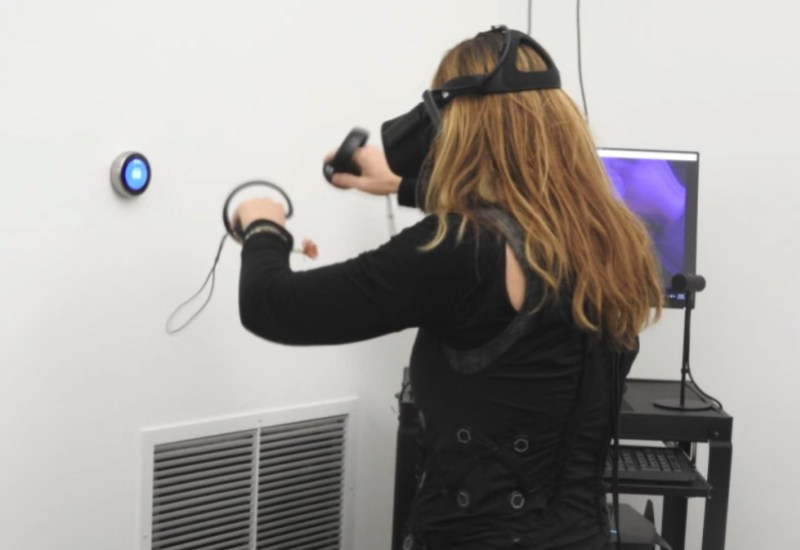 Above: A woman wears NeoSensory’s haptic vest. When someone touches her in VR, the suit’s sensors light up.

After I got out of it, Bailenson said that over time, you’ll be able to hire people who are experts at moving your body around, such as dance gyrations, and you can concentrate on things like talking to people. It will be one more aspect of a vast virtual economy, and it will be fun because it will be more intimate.

“You can build more trust, by touching someone on the shoulder,” Bailenson said. “The difference is you can scale it up and touch 20 shoulders at once. If someone shakes your hand tightly, you can respond with mimicry, and squeeze their hand hard.”

Is it Ready Player One? Not yet. It doesn’t look nearly as good, and the avatars have a long way to go before they’d be considered realistic. But as Rosedale said, it’s a beginning.