Every year, the naysayers warn about a financial bubble in the game business. They sit on the sidelines and wait for the world to fall apart. But it still looks like they’re missing out. The game business is still on track to grow from $70 billion now to $100 billion by 2017.

Venture investors have put about $472 million into game startups in the first half of this year, according to boutique investment bank Digi-Capital. But exits are already running past $10 billion so far this year, thanks to the most recent $960 million acquisition of the social game assets of FunPlus. That’s already more than double the number of acquisition dollars in 2013. Most of the buyers are Asian game companies acquiring players in other territories, but the biggest deal here reflected a tech titan moving into gaming: Amazon’s $970 million purchase of gameplay livestreaming firm Twitch. With big companies like game engine and services firm Unity Technologies up for sale, it’s easy to see how the record year could get even bigger.

In 2009, the average deal value was $42 million for an investment in a game startup. By the first half of 2014, it was $84 million, up 98.9 percent over five years, according to merger and acquisition advisory firm The Corum Group. Why is this happening?

We’ll find out as we discuss Total World Domination. That’s our theme for GamesBeat 2014 conference that takes place Monday and Tuesday in San Francisco. We’re trying to get all the right people in the room — the movers and the shakers who are creating the earthquakes in gaming. We’re trying to build an event where you can meet these people who want to dominate the world.

Competition in consoles was pretty limited to a few territories, and games made for one market didn’t fare well in other territories. That’s not the case with mobile, as iOS and Android have spread the world over and given even the smallest indie gamer the chance to reach a billion players. The opportunity to seize a global audience has created a race.

Game companies have been under a lot of stress in recent years. The older traditional firms like Electronic Arts and Activision Blizzard had to make the leap to digital. They had to figure out how to make free-to-play games to become relevant in emerging markets where $60 titles aren’t. Companies that were successful in one market had to dip their toes in another to see how they could thrive. In 2012, we called this the Crossover Era. As this trend accelerated in 2013, we chose The Battle Royal as our theme. Disruption was the order of the day.

Now the growth of the mobile game market is accelerating, and the major players of this era are coming into focus. Google and Amazon fought over Twitch. SoftBank has invested a few billion dollars in game companies such as Supercell and GungHo Entertainment. EA and Activision Blizzard are no longer the biggest kids on the block, as Tencent, which bought majority stakes in Western companies Riot Games and Epic Games, is now the world’s biggest game company. But Tencent has to be looking over its shoulder at Chinese e-commerce vendor Alibaba, which is about to have the biggest initial public offering in history and has made big game-related investments in Tango and Kabam.

They’re all jockeying to be in the right position so they can grab the big prize, and a lot of these people will be at our event. If I see any of them talking together at lunch, maybe they’ll be plotting an acquisition. Among the speakers at our event: Andrew Wilson, CEO of Electronic Arts; Bob Meese, head of business development for Google Play; Mike Frazzini, vice president of games at Amazon; David Helgason, CEO of Unity Technologies; Owen Mahoney, CEO of Nexon; Dan Brody, vice president of business development at Tencent; and Peter Molyneux, CEO of 22cans.

The prize that they’re all competing for in the game industry isn’t just the money in games. With transmedia, it includes game brands that could grow up in mobile (think Angry Birds) and spread into other media. Skylanders has enabled Activision Blizzard to become a huge toy company. Disney and Nintendo are chasing it with their own toy-game hybrids. Movie tie-ins, which were once the magnet for poor quality, are back in good stead as companies like Kabam show the value of film franchises like The Hobbit. Lionsgate, having seen the success of movie-related mobile games, has Kabam working on titles based on The Hunger Games film and book franchise.

Halo is a nice case in point for how to make a trillion dollars in games. Microsoft launched Bungie’s sci-fi first-person shooter game in 2001, and it has sold more than 50 million copies at $60 each. That’s maybe $3 billion in retail revenues. Microsoft ventured into Halo toys a while ago, and it is now making Halo TV shows and a web series. The Halo movie may yet come about if those video series are successful. Eventually, that’s going to add up to a lot of Halo dollars, all inspired by a game. If you dominate games, you may dominate entertainment. Or so the thinking goes. Halo may still have something like $997 billion to go in its quest for a trillion. But it’s a good start. Take-Two Interactive and Rockstar Games might have a similar opportunity with Grand Theft Auto.

Game companies are colliding with entertainment companies in a race to build the dominant medium. Indies like Mojang want to strike a blow for free thinking, creativity, and diversity of content. The Swedish company, run by the eccentric indie Markus “Notch” Persson, has unlocked a giant creator economy with its Lego-like Minecraft game. But will Mojang, which is rumored to be in the process of being bought by Microsoft for $2 billion, have its price? If Mojang gets bought. Someone else will come stand for the indies. Maybe it will be one of our best game startup contest finalists. 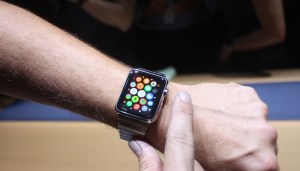 Among the platform owners, nobody wants to be checkmated. Apple’s smartphones checkmated the watch business, and now that we use our smartphones to get the time instead of watches, Apple is now bringing the watch market back with its Apple Watch product. That could create a whole new layered ecosystem of watches, apps, and, yes, games. In that process, Apple is the one calling the shots, trying to stay one step ahead of rival platform owners. If Apple checkmates someone else, the odds that we’ll all be working for Apple increase.

But the creators of content always have their say in controlling their destinies. They migrate to platforms where they can find freedom and growth. Zynga thought it found that platform with Facebook. But then King one-upped Zynga with Candy Crush Saga on mobile. The stock market hoped that these two companies would carry the industry — and investors — to greater riches. But they’ve stalled a bit.

Still, you can see the potential. In the larger mobile Internet market, there are 25 companies with $1 billion in value. Those companies are expected to drive the mobile Internet industry’s revenues to $700 billion in three years. Why can’t something similar happen in games, since games are the most engaging apps on mobile devices? After all, many of those mobile Internet leaders are companies like Microsoft, Amazon, and Google. All of them have become game companies.

And there are so many companies with billion-dollar games, like Machine Zone, Supercell, GungHo, Gumi, and King. They’re like one-hit wonders, or maybe three-hit wonders, for now. But they may get lucky and churn out a whole string of hits. If they do, they will become the companies with multibilion-dollar valuations in gaming (if they’re not already there). Venture capitalists like Mitch Lasky of Benchmark, Tim Chang of Mayfield, Rick Thompson of Signia Venture Partners, and Phil Sanderson of IDG Ventures are always plotting how to fuel game startups that can take advantage of or unravel the monopolistic desires of the platform owners.

If we’re going to have a trillion-dollar game industry, it’s going to take a beautiful ecosystem, filled with things like Apple Pay, which makes it easy to buy games or buy stuff in games. But the ecosystem has to be open enough to permit real competition. Platform owners can enable a wonderful world of revenues, but they can’t get too greedy and drive publishers and developers away. They shouldn’t charge 30 percent fees just for holding the door open. Valve, the maker of Half-Life and the digital game distribution platform Steam, is cognizant of the risks of being beholden to a platform holder, and that’s why it is scrambling to create its own Steam Machines gaming platform.

The next-generation consoles like the PlayStation 4 and the Xbox One are contenders to be the enabling ecosystems. But there’s going to be so much more than that as Total World Domination plays out in the coming years. The Chinese companies that enable Western game developers to publish their games on the many app stores in China could be the ones holding the door open to a trillion dollars. The smartphone and tablet platforms could open the door to wearables, which in turn could open more doors for games. Virtual reality might be the platform that triggers another explosion in gaming.

That’s the thing I like about games now, even though I have covered them for 18 years. There’s so many open doors. We hope you come to our conference and use them.