Michael “MajorManiak” Szymaniak is one of the star Call of Duty League (CDL) esports players for the Minnesota Røkkr. And this young man who plays Call of Duty for many more hours than we can imagine will be a coach for the upcoming Call of Duty Endowment‘s C.O.D.E. Bowl, a charitable event sponsored by USAA on December 11. As a virtual military player who has never been in the armed forces but was the son of an active-duty Army veteran, Szymaniak will give advice to real-world military soldiers who will spar with their comrades across the different armed forces.

At the second annual event, the Call of Duty Endowment will raise money to provide jobs for veterans. This year’s event will have three new teams making their debut from the U.S. Marine Corps, U.S. Air Force, and the U.S. Space Force. In addition, with the participation from the United Kingdom’s British Army, Royal Air Force, and Royal Navy, the C.O.D.E. Bowl will also be the first trans-Atlantic military esports competition to feature all of these branches. I talked to Szymaniak about what he’s going to tell these veterans about how to fight a battle in a virtual military game, this year’s Call of Duty: Black Ops — Cold War multiplayer.

Szymaniak was appropriately respectful about the irony in that situation, but he isn’t shy when it comes to giving advice about a game that he plays for untold numbers of hours. I asked him about that advice and got him divert from his mission for a little bit to focus on what is really important: his recommendations for making me a better Call of Duty player.

Now before my colleagues say this can’t be done, I must report my results so far this year. I’ve played for a full day and 3 hours and 26 minutes. I’ve hit Prestige (the top level) in multiplayer combat and have played 167 matches. I’ve been on the winning side 79 times and lost 77 times, for a win/loss ratio of 1.03. My Kill (Eliminations)/Death ratio is 0.91, meaning I die 100 times for every 91 kills I get. My best streak is 13 kills before I got nixed. My favorite weapon is the Stoner 63 light machine gun (LMG), but I’m trying to level up my M82 sniper rifle.

My global rank is 2,591,806. That means there are 2.5 million players who are better than me. Before you chuckle too much, I think that might put me around the top 90% of players. In past years, I remember being ranked around 4 million or 5 million. Any explanation for why I’m doing good this year probably has to do with practice, as I’ve been playing Call of Duty: Warzone for much of the year and I’ve also been more engaged with the alpha testing and beta testing. And with a fully leveled up LMG, I’m now able to get more kills in a game than deaths. One of my peak games on the Cartel map was 46 kills and 22 deaths. 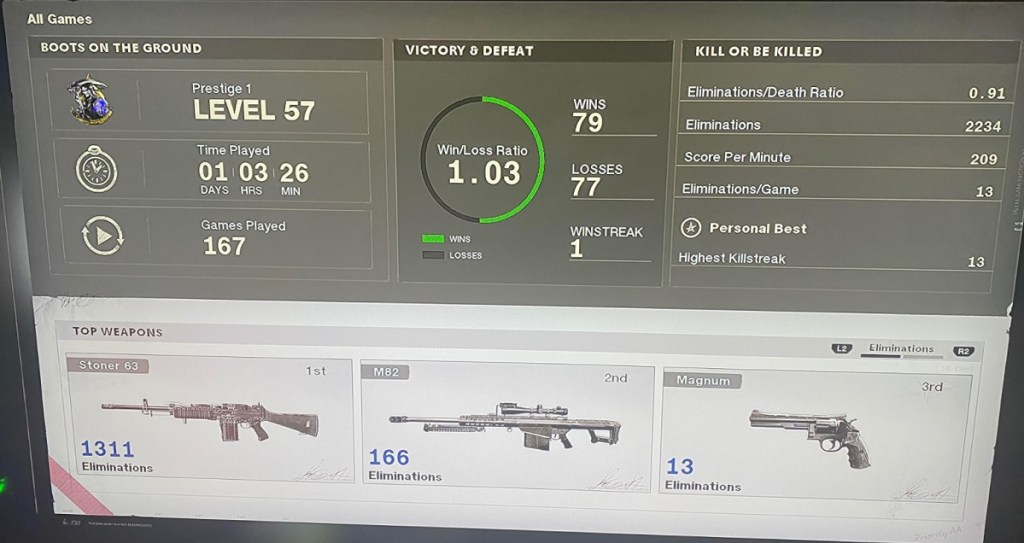 Of course, while these results make me proud, for someone like Szymaniak, they are laughable. During our interview, he was kind enough not to laugh at my scores.

“Anybody can really pick up a controller and play the game and shoot the enemy in front of them,” he said. “But I think what separates a lot of the pro players from others is how they play the game, fundamentally. It’s about knowing in respawn game modes about playing the Hardpoint [the point on a map everyone has to try to hold] in the correct way, and making sure you’re rotating properly as the Hardpoint rotates. You have to pay attention to the radar, which tells you where your people are and where the action is.”

Another important thing is to communicate with your other players and not just by cursing at them. Hardpoint, Search and Destroy, and Control are the maps that the pros play in the Call of Duty League. These modes are less forgiving and they concentrate the players in control points on the map. You have to find the right position so that you can dominate the Hardpoint, Szymaniak said. That may mean “camping” to other players, which is frowned upon as unsportsmanlike. Campers stay in a spot and pick off unsuspecting players and rack up the kills. But Szymaniak sees it as taking advantage of the terrain so you can hurt the enemies as they respawn or take them down as they expose themselves by trying to attack the Hardpoint through a bottleneck.

He said you should always try to memorize the maps and the order of rotation, like where the Hardpoint will move next. That comes from practice. And Szymaniak practices all the time. He gets up in the morning, works out, eats well, and then scrimmages for hours with his teammates. He treats it like a job. He likes to be competitive, and he doesn’t get tired of it. He picks up other games like Fortnite once in a while, but he always comes back to Call of Duty because he thinks of its as a career. He’s one of just 48 players in the CDL, and lots of people would love to be paid to play games like he is. Players can get rich playing the game, and they have full health benefits. 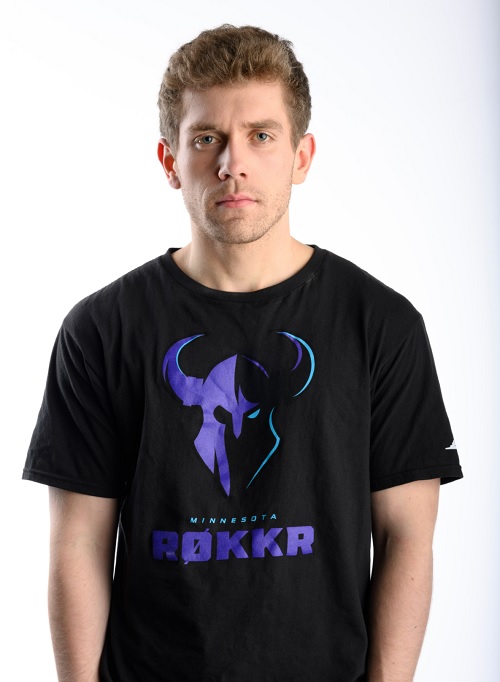 Above: Michael “MajorManiak” Szymaniak is a member of the Minnesota Røkkr esports team in the Call of Duty League.

As for weapons, he noted the Tundra and the Pellington are the best sniper rifles. When fully leveled up, they’re much easier to fire quickly and they come with scopes that magnify the targets so it’s hard to miss. But playing as a sniper is also about positioning, like setting up on the cliffs on the Crossroads map while your buddy sets up on a rooftop so that you can get the enemies in a crossfire.

“You set yourself up in those power positions to get multiple kills, duck down, reload, and pop back up to fire down those long angles,” he said.

On the Cartel map, the tower is a good place to stay and try to dominate the map. Overall, I enjoy Cartel, Crossroads, Miami, and Armada the most. Szymaniak likes them as well but he also likes Moscow, Garrison, and Checkmate.

While LMGs can be impressive, they’re banned in competitive play, and the assault rifles can deliver better results because they are faster to wield and are still pretty deadly. He likes the AK-47 and the Krieg, using the Microflex LED scope or the Red Dot scope. The attachments which you unlock as you progress up the ladder are really important, and you can spend all day watching videos talking about the right attachments. The pros also use submachine guns like the AK-74u and sometimes the MP5.

“You’re able to move around more freely and change your position compared to the LMG, where you’re not as mobile,” he said.

He doesn’t usually hipfire unless he’s in close quarters and is in a near-panic situation and about to be killed. But aiming down the gunsight is critical. You want to fly or jump around corners and aim in to finish off a surprised enemy.

Paying attention to your teammates is also important. Rather than charge all the way to the enemy’s spawn, Szymaniak will stay back with teammates and stay close to them.

“You don’t want to play basketball and beat the other team entirely by yourself,” he said. “You want to count your blessings. Holding crossfires with your team and rotating that is good.”

I could have stayed on the phone and gotten tips for hours, but we only had a brief time to chat. I realize that I can never put as much time into the game as someone like Szymaniak does, and he fully deserves to be in the top 48 esports players in the league with his dedication. And I realize that millions of players are probably always going to be better than me because they put in the hours and are simply more skillful. But I’m enjoying doing better than I usually do this year, and I’m looking forward to getting back to Warzone too when it flips to Cold War.

While this game has made us all feel better during the pandemic and distracted us from our crazy real world, it is important to remember that Szymaniak is a good sport and he is also working on an important cause. His own father has been in the military for 37 years and he has been deployed twice.

“I’ve been around the military my entire life, and if I did not play Call of Duty, I probably would have gone into the military,” he said. “My dad’s doing the real thing, and I’m on the virtual side.”

The Call of Duty Endowment has funded the placement of more than 77,000 vets into high-quality employment since its inception, and it aims to place 100,000 veterans into meaningful jobs by 2024. And if Szymaniak does his coaching well enough, maybe some of those veterans will get jobs playing in the Call of Duty League themselves.