A year ago, virtual reality headset maker Oculus VR was barely noticeable at the 2014 International CES, the big tech trade show in Las Vegas. This year, thanks to its $2 billion acquisition by Facebook, it had a giant booth that dominated the gaming section of the sprawling show floor. And it had a demo, dubbed “Crescent Bay,” that rocked.

Virtual reality was a hot trend at CES because it promises to deliver experiences to gamers and nongamers alike that they’ve never been able to have before. It represents one more step toward the illusion that we can all live alternate lives in a cyberworld, like in the film The Matrix. Maybe because our own lives may be a little too drab, we all want VR to succeed.

Long lines of convention-goers snaked around the Oculus VR booth at all times. Oculus VR revealed the Crescent Bay demo for about 1,000 developers and some members of the press last September. Nate Mitchell, the cofounder of Oculus VR, said in an interview with GamesBeat that the team beefed up the demos with 3D positional audio. Now it has directional sound, so that it feels like noises are coming at you from different directions. This adds to the immersiveness of virtual reality, where you can look around and maneuver through a 3D animated world.

“You’re going to be able to pinpoint sounds above, below, out in front of your, in full 3D,” Mitchell said.

The state-of-the-art Crescent Bay demo was pretty cool. I saw it and was amazed at how far the quality had come since the DK2 (development kit 2) I saw at the E3 trade show this summer and the “Crystal Cove” demo that I saw a year ago at CES. The show was the first time consumers could view the latest Crescent Bay technology from Oculus in public. The developer isn’t releasing Crescent Bay as a development kit, since it is now pressing forward on creating its consumer product. 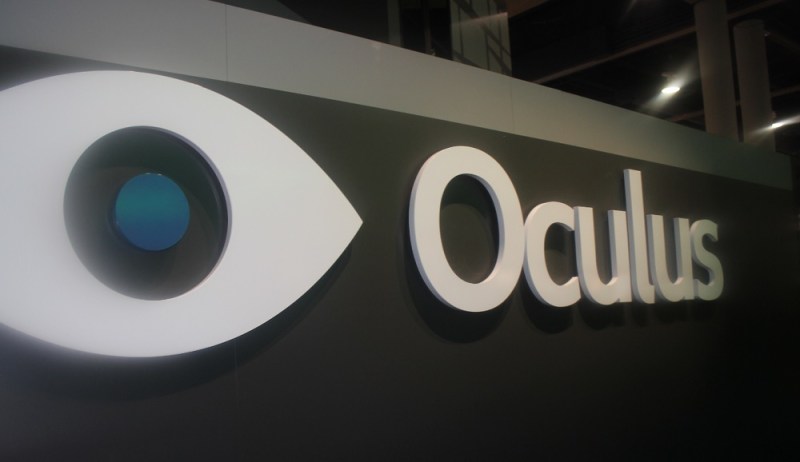 I put on the Oculus Rift headset, which also came with earpads on either side. In the demo, Oculus showed a series of scenes in which I couldn’t manipulate the environment. But I could look around in any direction to see the full depth of the 3D scenes. Each vignette was tuned to show off a feature of VR. The wire for the headset led upward to a boom on a swivel, allowing me to turn around in 360 degrees without becoming entangled by the wire.

I immediately noticed that the sharpness and realism of the 3D graphics was much better than in the previous versions. With DK2, you could see the virtual reality equivalent of pixelation, as if you were looking at everything through a screen door. This “screen door” effect was still barely there in the Crescent Bay version, but it was much reduced. When I concentrated on the illusion, I barely noticed the lines.

I saw an alien with a big head who looked like E.T. As I moved from side to side, his big eyes followed me. In another scene, I saw a cartoon world with cute animals. I also stood on the edge of a skyscraper, looking around at a bunch of other buildings. I also a realistic rendering of a T-rex in a museum; it let out a huge roar and then charged straight at me, its feet thundering.

In the final scene produced by Epic Games (makers of blockbuster shooters like Gears of War and Unreal), a demo dubbed “Showdown” depicted a giant spidery robot attacking a bunch of soldiers on a street. The quality of the graphics was unbelievably good, but that was because it was slowed down. In slow-motion, I could see bullets whizzing by and explosions taking out the soldiers around me. As I was propelled forward through the scene, I could look from side to side. A car was flying through the air. I could see a man being bounced around inside it as it went by. The technology may not be there to do that scene at full speed yet, but it gave a tantalizing taste of what was to come.

“We are trying to show a diverse set of things you can experience in VR,” Mitchell said. “And they are all new.”

The experience ran at 90 hertz, or 90 frames per second. That helped get rid of the feeling of seasickness that people associated with earlier versions, which had too much lag. The Crystal Cove version ran at 76 hertz. The Crescent Bay demo didn’t make me feel nauseated at all.

This demo showed why Oculus, now fully integrated within Facebook, is still the king of virtual reality. It is attracting the star developer talent that is creating cool prototypes. But it once again showed there is a long way to go before virtual reality fulfills its promise of creating a believable alternate reality. Next to the giant Oculus VR booth at the show, everything else in the gaming exhibit section looked small. The statement from Oculus and Facebook was clear: Oculus was there to command the mindshare. 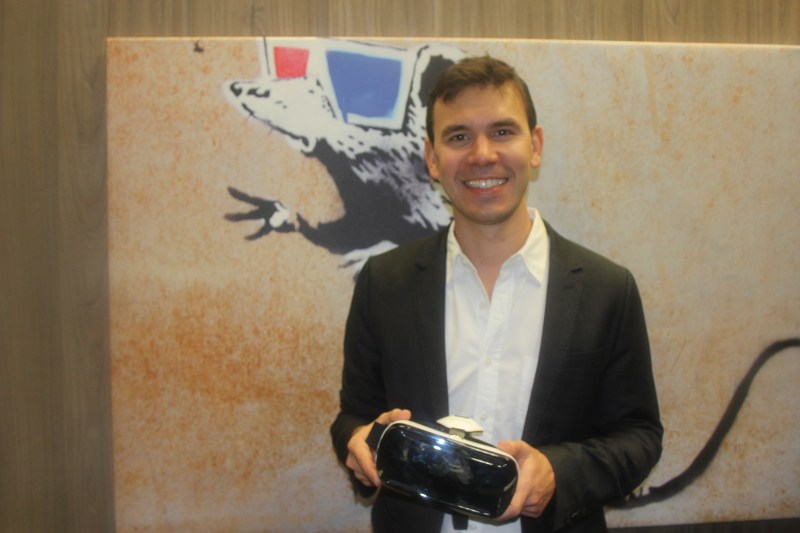 Above: Nate Mitchell, the cofounder of Oculus, at CES 2015

People have plenty of questions about what comes next and how fast Oculus will do it. Mitchell was pretty transparent about them. He said the team wasn’t yet close to locking down final specifications for the product. Oculus has brought aboard a lot of VR talent, and they’re all working hard.

Mitchell confirmed there is a chance that Oculus will ship a consumer version in 2015. But he acknowledged that the pipeline from finishing a final design to shipping a product to consumers could be as long as eight months. Oculus still has to create input systems, better graphics, and a wireless system.

Mitchell said that a lot of developers were releasing free demos, but a lot of others are holding their content back because Oculus has no commerce system yet. It still has to create its store so that developers can profit from their creativity.

“Input is really the big missing piece,” Mitchell said. “It has to be there for the great consumer VR. It is the elephant in the room, and we want to deliver it. It’s something we are working on.” 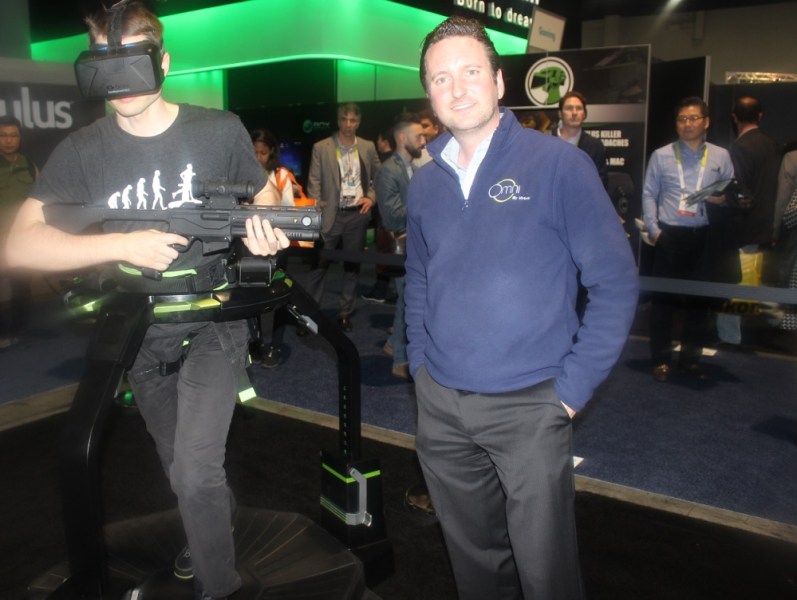 Above: Jan Goetgeluk of Virtuix next to the Omni Treadmill at CES 2015.

Close to the Oculus booth at CES was Virtuix, which makes the Omni Treadmill platform that allows you much more freedom of movement in a virtual world. Lots of people were watching the Virtuix booth, where two trained players were dueling with each other. You can run your heart out while strapped into the Omni Treadmill, which is now in its final form. In contrast to the Rift, which is a seated experience for the most part, the Omni Treadmill gives you a lot of freedom of movement. The Omni tracks you through sensors placed on low-friction shoes that you wear. The Omni is an omnidirectional treadmill with no moving parts, and those shoes help you walk more easily. While you are strapped into the treadmill, your hands are free to hold a gun.

“We hope our backers and customers will be impressed,” said Jan Goetgeluk, the CEO of Virtuix, in an interview with GamesBeat. “We’ve been working on it for three years, and I’m very happy to show the final product.” 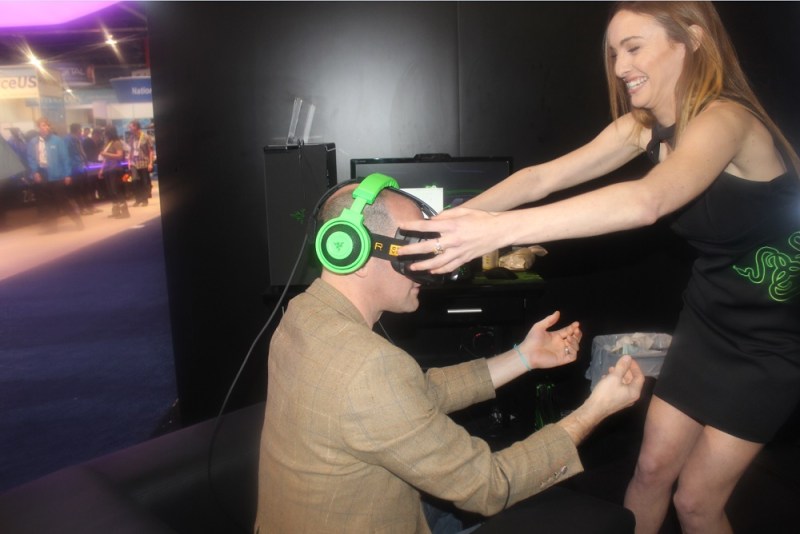 Above: This isn’t what it looks like. It’s a demo of the OSVR virtual reality headset.

I also saw lines at Razer’s booth to view the Open Source Virtual Reality demo, another virtual reality tech platform that supports open standards. Razer is going to provide an OSVR Hacker Dev Kit, and it will be available for public release for $200 in the second quarter, said Min-Liang Tan, CEO of Razer, in an interview with GamesBeat. Other companies are banding together to support the open platform, which provides an alternative to Oculus.

“We have been working on VR for a long time,” Tan said. “We are standardizing the interfaces so that anyone can build for VR easily, whether it uses Oculus or something else.”