I’ve been dreaming about putting on a great game industry event for a long time. We’ve been doing our GamesBeat conferences for a decade now. And they’ve been memorable. But I finally feel like we’ve got something special with GamesBeat Summit 2019. I’m so pleased to announce that one of our speakers will be Nolan Bushnell, cofounder of Atari and the father of video games. He’s going to appear on stage with four of his children in a session dubbed “Growing up Bushnell.”

Our event will take place in Los Angeles at Two Bit Circus, a “micro-amusement park” that is like an arcade meets Ready Player One. Two Bit Circus has significance for the Bushnell family because Nolan’s son, Brent Bushnell, is its co-creator. He has built a place that blends a modern carnival, escape rooms, bars, arcades, and virtual reality experiences into a single entertainment center. He will talk about it in a session with his father on location-based entertainment.

Nolan Bushnell moved on from Atari to start the location-based entertainment business with Chuck E. Cheese’s, which mixed arcades with pizza parlors and shows from animatronic performers. But decades later, our locations need all the help they can get, and so who better to do it than the first family of fun. We are delighted they can host us and spark this discussion about the origins of fun and community at a place like Two Bit Circus. 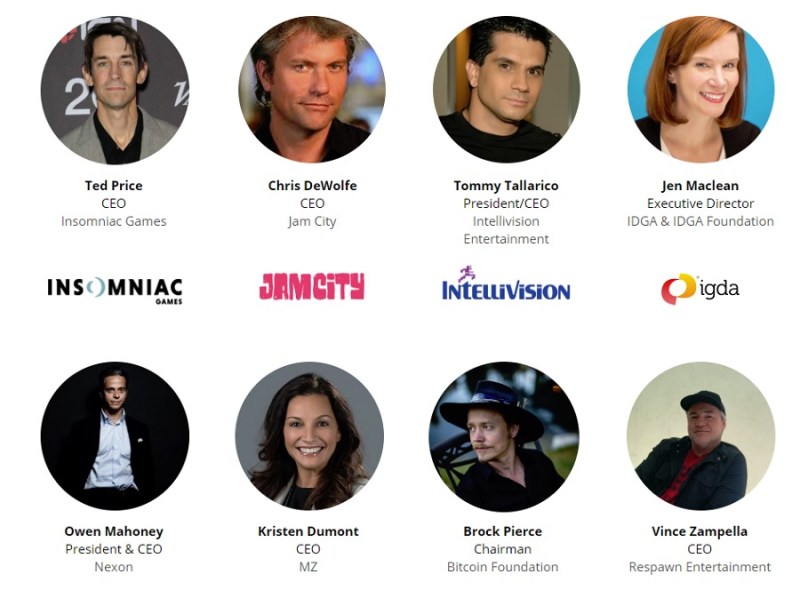 Above: Eight of our key speakers at GamesBeat Summit 2019.

Our event will have a lot of people who are fond of chasing the fun. That’s what Vince Zampella, the CEO of Respawn Entertainment, instructed his team to do in prototyping their latest game. They worked on it for 18 months and then sprung a surprise on all of us. The result was Apex Legends, the battle royale shooter game that has climbed to 50 million players in just one month, challenging Fortnite for the throne. I’m delighted that Zampella agreed to speak at our event, because he’s the magician of the moment. When I interviewed him after the Apex Legends reveal, he repeatedly said, “We chase the fun.”

Ted Price, the CEO of Insomniac Games, has agreed to moderate Zampella’s session. And Price will also speak with Morgan Webb about the making of Insomniac’s big hit, Marvel’s Spider-Man, which generated more than 9 million games sold last fall. Price’s company has hit its 25th anniversary, an age that few game studios have ever hit. Price’s Spider-Man might never have happened if Sony and Universal hadn’t given Insomniac a chance with its first game, Disruptor.

Webb, by the way, is working at a game company called Bonfire Studios. It was cofounded by Rob Pardo, a longtime Blizzard developer who led the creation of titles like World of Warcraft. Pardo will talk about growing up at Blizzard and trying to establish the right culture at a game studio from the ground up. While Pardo is doing that in Orange County, California, we’ll also hear from Michael Condrey, the new head of 2K Silicon Valley and the co-leader who built Sledgehammer Games into a 300-person studio that gave us Call of Duty: World War II.

The bosses of gaming 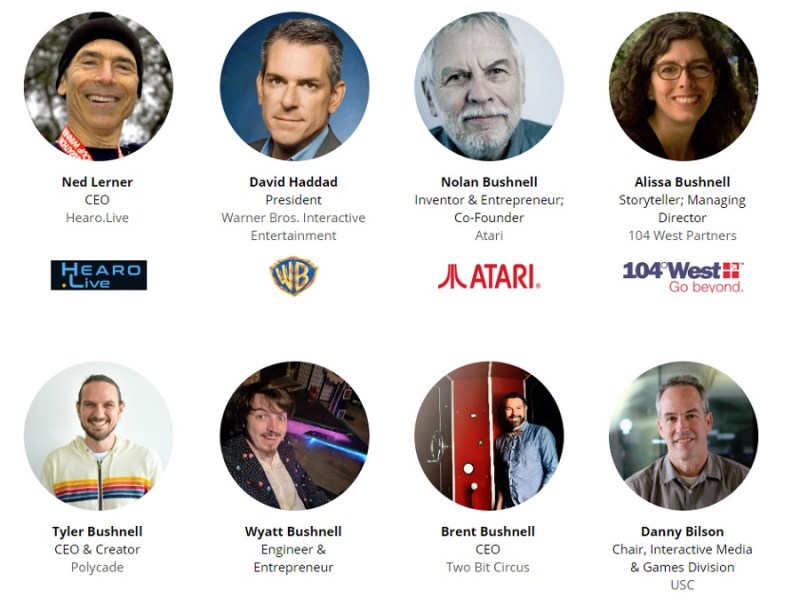 Above: The Bushnell family is like 5 percent of our speaker pool.

Our conference isn’t just about the blockbuster console and PC games. Our discussions span all of games. We’ll have heavy representation from the mobile game industry with Chris DeWolfe, CEO of Jam City; Frank Gibeau, CEO of Zynga; and Kristin Dumont, CEO of Machine Zone (MZ). Dumont hasn’t spoken a lot at other events, but she’ll shed light on how massively multiplayer online mobile gamers are more diverse than we think.

Chris Heatherly, executive vice president of worldwide games and digital platforms at NBCUniversal, will come talk about Hollywood 3.0 with a special guest. (Even I don’t know who it is). After all, we are holding this event in Los Angeles, where the game industry is strong because of its Hollywood connections and esports growth. David Haddad, who runs 10 studios under Warner Bros. Interactive Entertainment, will also speak about the largest form of entertainment. All these folks talk about consolidation so much that I wouldn’t be surprised if someone sparked some acquisition talks at our event.

We like to spread out to the edges of gaming, the seams of the industry where it is intersecting with other trends and technologies. That’s why we have Brock Pierce, one of our newly minted Bitcoin billionaires. OK, given the price of Bitcoin lately, we’re not sure if he’s a billionaire. But Pierce has his fingers in an enormous number of projects in the digital currency, cryptocurrency, and blockchain markets. He also knows gaming, as he was a pioneer in virtual goods and ran a social casino game company. When Pierce told me that he felt blockchain and gaming were finally ready to go big, my ears perked up.

“Now that we actually have blockchains that can scale, we’re going to see a massive, massive wave of gaming stuff being built here,” he said.

The edges and seams of gaming 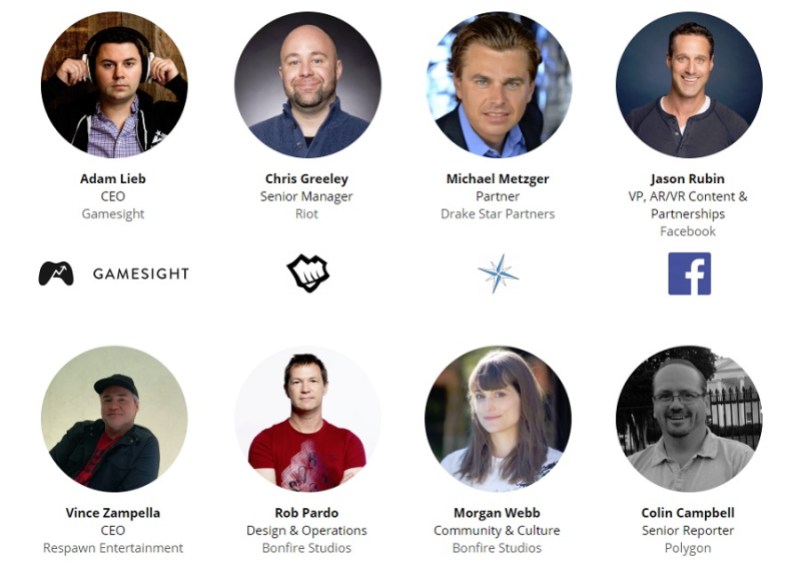 Above: More speakers at GamesBeat Summit 2019.

Sure, that sounds like massive hype. But he’s laying down his bets, and so is Kevin Chou, the former CEO of Kabam, the mobile gaming publisher that Chou sold in parts for close to $1 billion. Chou chased the growth areas of gaming by forming Gen.G, the esports club with the Seoul Dynasty Overwatch League team. And most recently he started Forte to take advantage of blockchain to bring a new kind of economics to games to replace free-to-play. We’ll also have a blockchain games panel with participation from Tron and some other emerging players in blockchain games. They’re all trying to blend gaming with something else to create more growth.

Of course, other folks thought that Chou got it right with Gen.G and esports. We’ll have Mike Sepso, cofounder of MLG and an executive at New York Excelsior, grab the stage with Peter Levin, president of interactive ventures, games, and digital strategy at Lionsgate.

And with our theme this year “Building Gaming Communities,” our speakers and guests will talk about the best practices for building sustainable and positive communities in games. We’ve got two of the world’s best community experts, Raph Koster and Amy Jo Kim, talking together about their experiences with community building.

Jen MacLean, head of the International Game Developers Association, will also talk about things that can be harmful to the community of game developers, whether that’s crunch time, harassment, or rebellions against monetization tactics. Keisha Howard of Sugar Gamers will moderate a diversity panel that we hope will shed light on a new aspect of diversity. 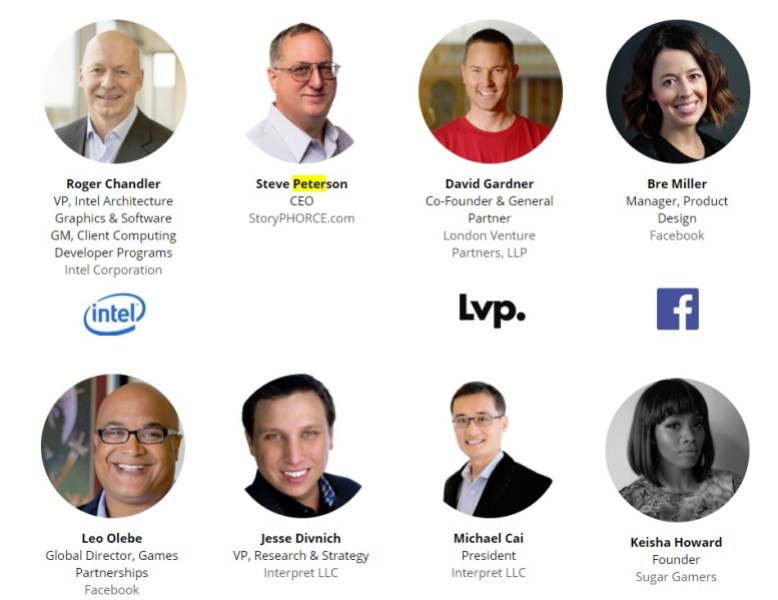 Above: We’re reaching wide with our speakers for GamesBeat Summit 2019.

Our depth on gaming communities will be awesome, with folks like influencers Dodger and Omeed Dariani, Facebook’s Leo Olebe and Bre Miller, and Oculus’s Jason Rubin.

And there are the communities of the future to think about. We’ve got two different investor panels that will tell everybody where some of the smartest game investors are putting their money now. Moderated by Crossover’s Eric Goldberg, our panels will address seed and later-stage investing with veterans including Scott Rupp, Gregory Milken, Ethan Kurzweil, David Gardner, Charles Hudson, and Ed Fries.

We’ll have Michael Pachter, analyst at Wedbush Securities, talk with Owen Mahoney, CEO of Nexon. Hopefully by then we’ll know what happens with all of the parties that are bidding to buy the shares of Nexon’s biggest shareholder, reportedly woth $9 billion.

If you’re wondering how we’re going to squeeze all of these speakers in across two days, we’ll have two concurrent stages running at once, the Boss Stage and the Hero Stage.

Diversity and the future 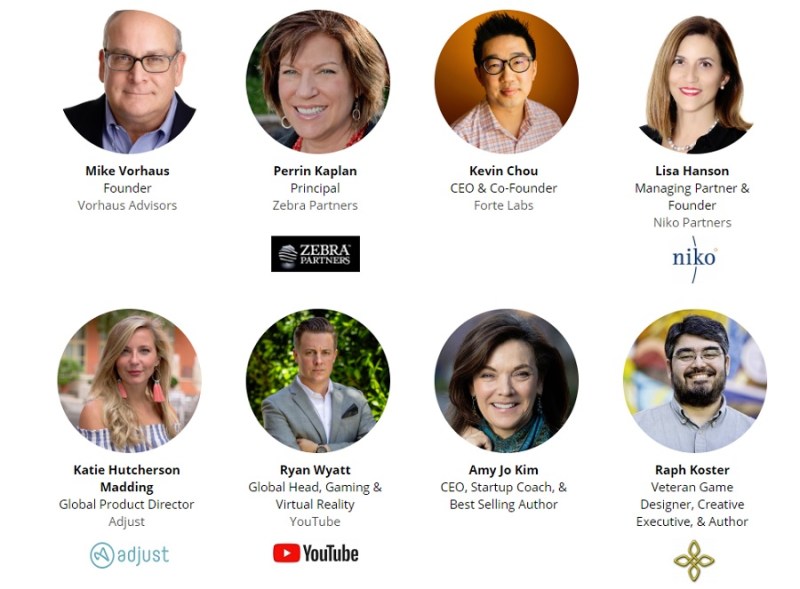 Above: What a lovely bunch of speakers.

And since we are so generous, we are even going to have a speaker whose successful event may eventually kill us. Rami Ismail, cofounder of Vlambeer, will come talk about his views as an ambassador for indie games as well as his idea to create the GameDev.World conference, an online-only event coming in June that will have game developers from all over the world talking about their craft — translated into eight languages. Ivan Fernandez Lobo, founder of Gamelab, will moderate Ismail’s talk. And hey, Rami is a nice guy, so we’re happy to have him come talk, even as he pulls an Amazon-like maneuver on our physical conference business.

I still believe that face-to-face meetings and in-person networking is what makes our events worthwhile. If you get this many smart people from across the games industry, deals happen. You may have noticed that we have covered almost everybody mentioned here in various VentureBeat and GamesBeat stories, and that’s because we want to capture thought leadership in games across events and media.

I haven’t mentioned all of our 70-plus speakers (at least 25 of whom reflect diverse backgrounds) yet, but I don’t want to turn this into a giant list. Andrea Rene of Whats Good Games will be back as an emcee, and she will be joined by Tommy Tallarico, the Video Games Live organizer who is bringing back Intellivision. We’ve also got a crew that represents the future, including USC Games head Danny Bilson.

Our agenda will be up very soon. I hope you all wind up chasing the fun by coming to GamesBeat Summit 2019. My dream is that this event will be the destination summit for networking, inspiration, and industry insight. At last, we’ll have all the right people in the room.